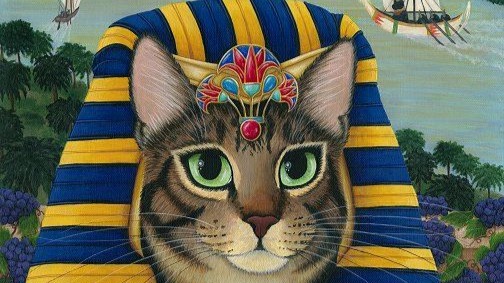 We Present You Cats, These Mystical Creatures, From The Age Of The Egyptian Pharaohs To The Present Day!!!

In ancient Egyptian mythology, even the accidental killing of a cat was severely punished — mostly by death? Once, a Roman soldier inadvertently ran over an Egyptian cat, for which he paid with his head. Namely, Pharaoh Ptolemy XII had him executed.

The data show that in the event of a cat's death, the whole family mourns as if it were a family member, and shaves their eyebrows as a sign of grief. As ancient Egypt was based on a totem religion, at the heart of the religion was always some animal cult as a spiritual symbol.

Statue Of The Goddess Bast

The "cult of the cat" marked the period of the New Empire (1555 BC), and gained greater importance with the development of the city of Bubastis around 950 BC, when that city became the capital and religious center of the goddess Bast. The "cult of the cat" reached its peak around 500 BC. And Bast became a very important and popular deity.

Cat Goddess Bast From Egypt with A Lion Head

Initially, she was portrayed as a raging lioness and was considered the patron goddess of Lower Egypt and the guardian of the Pharaoh, and thus the guardian of the highest male deity, the sun god Ra. Like him, Bast was considered a sun goddess. She was later considered the goddess of perfume and instead of the image of a wild lioness, she is depicted as a domestic cat. Thus Bast became the chief goddess and protector of cats.

Cats were sublime in Egypt also due to the fact that they were capable of killing snakes, especially cobras, and taming the pests of mice and rats that caused enormous damage to food supplies. Therefore, cats were sometimes allowed to wear jewelry or eat from the same plates as their owners, and after death, they would be mummified and taken to the temple of Per-Basta.

From all the above, it is clear that the "worship" of cats in ancient Egyptian civilization is a very important and specific phenomenon. But we also find the importance of the cat in other cultures - Islamic, Hindu, and Buddhist.

It is interesting to note that ancient Egypt was inhabited by 2 main "species" of cats: the tropical cat (Felis chaus) and the African wild cat (Felis silvestis lybica), which is also domesticated. Both species are thought to be the forerunners of the modern Egyptian Mau species.

My name is Teo and I come from Croatia, Europe and I am a bloger and influencer. My niche is pets especialy cats and dogs.