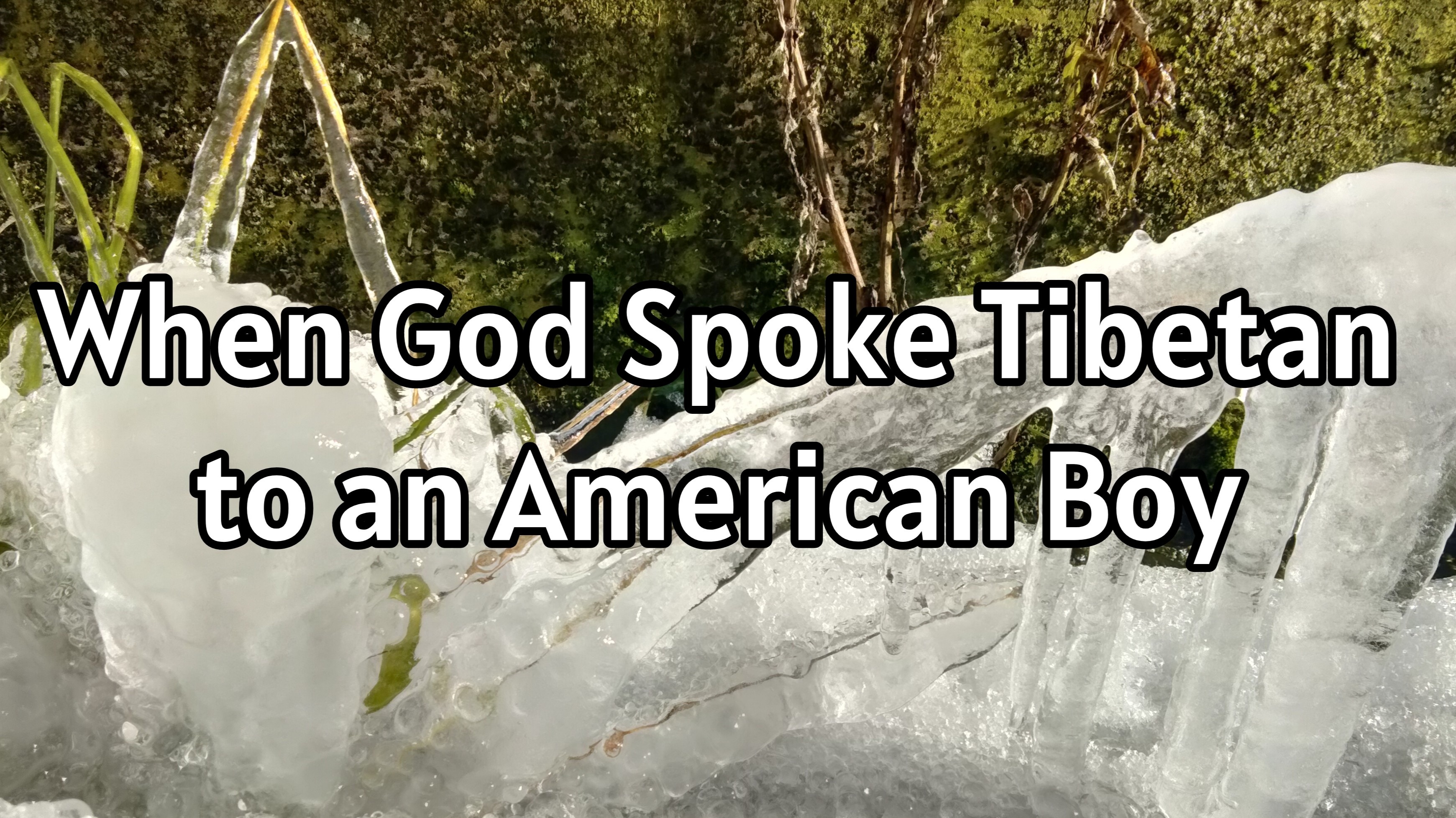 When God Spoke Tibetan to an American Boy

By MarvinScottMarvin | Wordplay Whatnot | 1 May 2022

It's strange and fascinating how certain forms of information reverberate and return to our awareness again many years after our initial encounter with them. It's also interesting how we are able to discover new things in re-reading books from long ago, things which may have escaped our notice or defied our comprehension in the naive inexperience and incomplete understanding of our youthful curiosity.

I have finished reading another book for the second time, somewhat accidentally. I didn't remember that I had read it before as I began to read it, though it did seem oddly familiar. The reason for this familiarity didn't dawn on me until I was into the penultimate chapter. As I finished reading the final chapter, the entirety of the memories came rushing back. Things which had troubled me greatly but had been forgotten all those years ago were suddenly fresh again.

The book is titled God Spoke Tibetan and the author is Allen Maberly. It was published in 1971 and I first read it a little more than ten years later. The book tells the 90 years long tale of the translation of the Christian Bible into the Tibetan language.

I first encountered this book sometime in the early 1980s. I found it in the bookstore at the church my family attended at that time (previously mentioned in Fast Times At Church).

That church was rather different from the typical church of the era. It was one of the first of what have come to be known as megachurches, although it was smaller than the nearby Crystal Cathedral, which opened to the parking lot for the drive-in church experience, and much smaller than the megachurches of today. The church was known as Melodyland, though the official name was Melodyland Christian Center. The name Melodyland remained along with the sign out front from the previous incarnation of the property and structure when it had been a concert hall and theater in the round.

Being as much a business as it was a ministry, there was a bookstore attached to the main building and it was quite popular.

As my parents would often spend time chitchatting with others after the service I would spend time waiting in the bookstore where I would often purchase Bible story comics or Archie comics with Christian messages and occasionally stickers such as the very popular rainbow which was a symbol of Christian faith before it was appropriated by the Gay community.

Yes, I can clearly remember how the rainbow stickers began to disappear from the cars in the church parking lot. The doves and crosses remained but the rainbows faded away. However, that's a story for analysis another time. Please, forgive my divergence to tangents, this is how memories work; connecting one thought to another.

One week, after discerning that I had already read all of the available comics, I began to look through the bookshelves for something else to catch my interest. That's when and where I first encountered this book.

The cover images were colorful and very different from anything I had experienced previously as they depicted traditional Tibetan culture. And the title was intriguing; God Spoke Tibetan. Really? I wondered why God would speak this obscure foreign language and was curious to learn what he had said that needed to be recorded in this particular exegesis.

So I picked it up and read the blurb on the back cover and the synopsis on the inside of the dust jacket. Then I read through the first chapter before my dad found me and said that he and my mom were ready to go home.

I asked my dad to buy me the book as the price was more than a month's worth of my weekly allowance. He looked at it and frowned before curtly denying my request, not just because of the price but because of the title and cover images. He said it wasn't a Christian book.

I, naturally, begged to differ and attempted to understand why he would say that our church would sell a book that wasn't a good Christian message. He said that they sold some things that were not properly Christian, simply for the money. As a child of only 11 or 12, I of course struggled to comprehend that statement. It clashed with the faith which had been handed to me through the church.

If the church was doing things that weren't strictly faithful to God but rather done for mere money, then, how could I have faith in the church and why did we attend services there?

My dad didn't bother to explain, just hurried me out to the car where the rest of the family were waiting impatiently as if I were the reason for the delay and not my parents' habit of lingering in conversation.

I would return to the bookstore every week and read another chapter of the book. One of the bookstore employees noticed this and asked if I was going to buy it. I informed him that I had neither the money to afford it nor the permission from my father to purchase it. His response was to kick me out of the bookstore and, after catching me again reading it the next week, ban me entirely from entering when he was on shift.

However, I was not so easily deterred and I would sneak in to continue reading the book, several times being caught and again expelled from the bookstore. He made sure to tell the other employees that I was to be permanently banned from the store for 'stealing'. They asked him what I had stolen and he said that I was reading books without paying. I argued that I was a regular customer and always paid for my comics and stickers. Still he insisted on my being permanently banned from entering the store.

One of the elderly women who worked there as a volunteer didn't care for his attitude and would open the door with a wink for me when he wasn't around. She had noticed my lingering by the door looking in the window and she had opened the door asking if I wanted to come inside. I informed her that I wasn't allowed inside and why. She said "Well, that's not right," and told me that I was welcome whenever she was there. That's how I was able to finish reading the book, standing in the aisle of the bookstore attached to the church with the book propped open on the shelf for easy hands free reading so as to not be obvious.

He did catch me again but by then I was on the final page and it was too late for him to prevent my 'theft' of the book; a caper which was so clever and clean that the purloined item remained on the shelf long after I had 'stolen' it. Not even the best cat burglar could boast of having so completely confounded the authorities while making off with the gems, as I didn't leave behind a void or some forgery but the actual item. I had made my own virtual pirated copy, though it faded into a distant and vague memory.

Now, all these decades later, I found myself reading it again but not out of inspiration of faith. Rather I have returned to it out of intellectual curiosity regarding the history of Tibet, hoping it might contain some new insight to add to my knowledge base on the subject.

I began to study the history of Tibet, the Dalai Lama and Tibetan Buddhism in 2004 after my then-wife suggested I read a particular book on the subject of Tibetan Buddhism; Dakini's Warm Breath by Judith Simmer-Brown. She had found it enchanting, but I found it disturbing. Most especially the admissions made by the author in the preface which my wife had not bothered to read.

Always read the preface, it tells you what motivated the author to write the book. I suppose this could serve as a sort of preface for what I intend to write regarding what I have learned in my study of Tibetan Buddhism since then.

If you have not yourself spent some years digging deep into the available literature, you may be quite shocked by the revelations contained in the information which I intend to shed some light upon. It may take a few more years to complete my work as I still have a stack of books to read and this particular book was the easiest breezy reading of the bunch. However, I will endeavor to occasionally write about what I have learned as I work my way to the larger task of a complete book of my own.

Suffice it for now to say that the corporate media propaganda regarding the Dalai Lama is an incomplete picture at best. Stay tuned, I'm just getting started writing on this subject.

Authentic biological human male. Based on a true story.

Poetry & prose. Self made mind of borrowed ideas. Word after word makes words, maybe sentences and even some sense. Wrote my first poem in 1982. Began to take my craft more seriously in 1992, but not too seriously. Been published a few times; Vim Magazine, Neon Geyser Porcelain Sky (Zeitgeist Press), 3 chapbooks. Editor of Spirit Caller Magazine. I've been invited to read my poems on KUNV, the Watt From Pedro Show, and Lollapalooza (Las Vegas, 1994). Featured in Las Vegas Weekly. Open mic host.