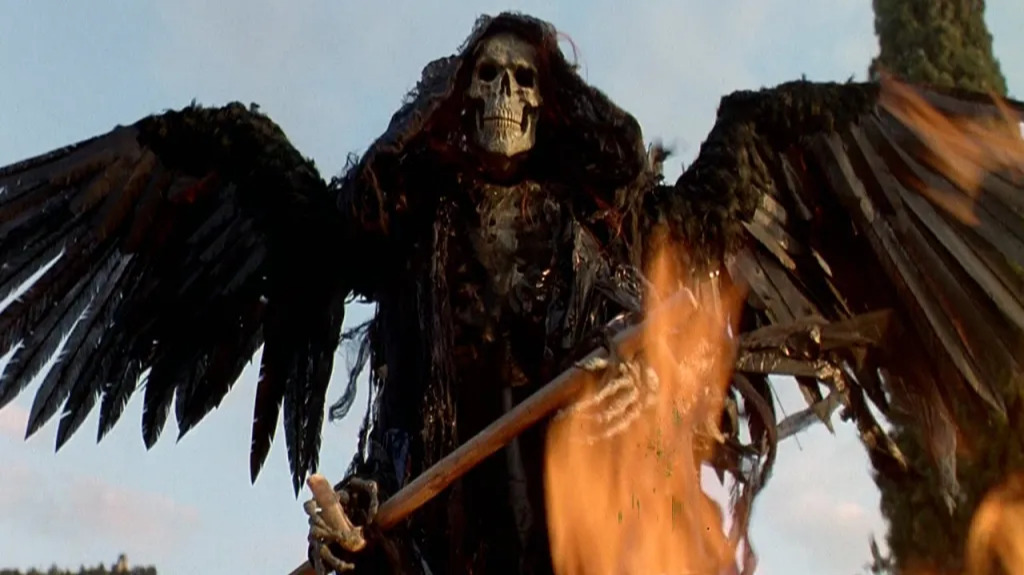 These are my opinions, thoughts and musings about Cemetery Man, an R rated horror film released back in 1994. This article contains spoilers and retelling of some parts of the plot. It is assumed here that the film is still worth watching even when the story is known – one reason for this assumption is the number of reviews that keep appearing online long after the film’s original release, calling Cemetery Man a cult horror classic. One other reason is it being one of my favorite films; I see it as a many layered work, which, in its own unusual way, is also life affirming one despite what can be seen on the surface of it. Also, the “Hellraiser” song, written by Ozzy Osbourne, Zakk Wylde, and Lemmy Kilmister, is featured in the film - the fact which has also contributed to me loving it.

I’ve seen zombie movies, games and series such as Resident Evil, The Walking Dead and Re-Animator, where zombie plague is a result of biological experimentation in a lab. I’ve seen zombie movies such as Night of the Living Dead and The Return of the Living Dead, where zombies appear because of accidents involving chemicals and radiation. 28 Days Later’s zombie was there because of virus's ability to leap from animal to human. All these films play on our fears of scientific advancements that eventually get out of our control yet actual, real zombie has got nothing to do with societies in highly developed industrial countries; even when the origins of ‘returners’ aren’t attributed to anything particular as in Cockneys vs Zombies or Dawn of the Dead. The original proto zombie can be seen in White Zombie – quite possibly the first zombie film ever made, as well as in The Serpent and the Rainbow; and a more commercial version of that type of zombie can be found in Zombie. The phenomenon in general is, of course, well known; mostly as a metaphor for a human being who’s lost its own will, and horror fans have probably seen every aspect of it, and know all the possible variations of tropes involving zombies. However a statement like that won’t hold true if one hasn’t seen Dellamorte Dellamore aka Cemetery Man.

About Malfunction and People in the Testnet of Deus Ex Machina

It begins with the film’s main hero having no clothes, lighting a cigarette and having a phone conversation. The phone itself is from the last century, and the shotgun, which is put to use as a public service during the very first scene, is probably even older than the phone on the desk in the ramshackle house of cemetery custodian. One could make The Matrix spin-off with scene such as this one in a sequel which deals with the situation after a peace deal would be brokered by Neo, and accepted by "God from the Machine", where people are given the choice of staying connected to Matrix permanently if they'd wish to do so. I can easily see the dead that come back right from the beginning of Cemetery Man, actually being confused humans in a beyond help state that’s caused by a malfunction somewhere in the machinery that is supposed to take care of human bodies while their brain is connected to Matrix. “Why Matrix?” One would ask. Well, because phone and zombies, duh...

The World at Night

This is not going to be a fully serious article always containing things that make sense. Because Cemetery Man isn’t a fully serious film, and it’s not intended to always make sense. It is a deliberate mix of real, surreal and all things macabre with some dark humor and gothic aesthetics. “Life goes on,” you hear the voice of Francesco Dellamorte, the Cemetery Man, when at the end of the first scene the camera shows you lead character’s world at night – the graveyard of Buffalora town, designed by Massimo Antonello Geleng, who at the time was already known for his work on Cannibal Holocaust and Federico Fellini’s Amarcord. The work on production design for this film eventually got Geleng two awards.

In Dellamorte Dellamore the dead coming back to life is thought to be an epidemic. It is not known what had caused it, or how to deal with it. Dellamorte, who also happens to be biologist with a diploma, wants authorities to investigate the phenomenon, but no one seems to be bothered. Probably because the Cemetery Man is doing a fine job of preventing the dead from leaving the premises, and so the whole affair just keeps going every night without change. Fortunately, Dellamorte has got an assistant Gnaghi, thus he doesn’t have to fight and dig graves alone. Gnaghi probably isn’t very fond of each one of the duties he has in the graveyard, but, as we find out, one thing the mentally handicapped chap loves there is dead leaves, and Dellamorte’s comment while watching his assistant dealing with those is, “we each do what we can to not think about life”.

How Love doesn't Win Against Death

One might think the film is a kind of cinematic Memento Mori note. While that is, in my opinion, not entirely wrong, we get Her in it to remind us about life. The dismal and funereal background only serves to elevate Her roles (plural here isn’t a typo). A scene such as admiring ossuary (to quote Her verbatim: “I have never seen anything so exciting!”) to the extent where it triggers sexual arousal, and kissing while enjoying the stench of death with similar passion to that of Dead in Lords of Chaos is, I think, a very potent use of contrast between all things expired, and the promise of beauty of life blooming, with a hint to instincts involved in the archetypal physical act of creating life by two people. But don’t expect the standard imitation of the act here; the story, based on the novel by Tiziano Sclavi, and turned into screenplay by Gianni Romoli, is at all times staying loyal to its core theme – death. Apparently that involves proving time and again that the maxim “nothing can stand in love’s way” just isn’t true. Thus the scene in ossuary ends with both, conscience, and memories of a dead husband, interfering. I think what we are to learn here is that a twenty year old Italian model, who’s one of the assets in the chosen career might be the fact that she’s of mixed ethnic background, having been born in Finland, shouldn’t marry a bloke who’s of her grandad’s age – such combination of things might prevent the young woman from enjoying that what life has to offer, besides she may fail to see that death might have actually been a liberator rather than tormentor. 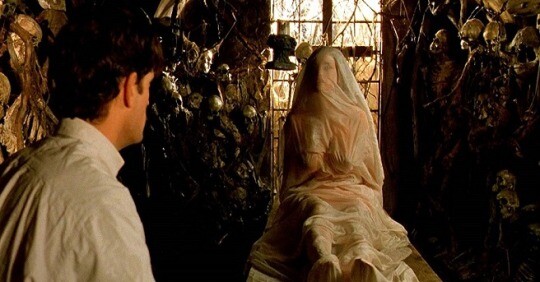 On the next occasion of intimacy, this time outside ossuary, the dead husband, on who’s grave the act is taking place, interferes not as a mere memory, but as a zombie fresh from the grave with behavior that reminded me of some of the scenes with Barbara Crampton in Lovecraftian Re-Animator and From Beyond back in 1980s. Cemetery Man's stunning reminder of life and beauty – She – gets injured, and dies a short while after. Love just doesn’t get to win here. Well, and if you think that’s cruel on the part of the author, wait till Gnaghi gets to have the head of the love of his life only for it to be taken from him too soon.

From Fetish to Talking Statues

Before Dellamorte’s lover passes away, the plot seems to be one of dark gothic romance with macabre overtones, at times having no issues with being provocative: there are hints to necrophilia and fetishes in it that are all delivered partly by Rupert Everett, who, I think, would have a lot more knowledge about suburban sinners and their trade than what an average actor would typically possess on the subject, while the other part of bizarre here is contributed by Anna Falchi, who once notoriously took off her red panties in front of cameras on Italian tv show for the show’s host to sniff the piece of her underwear.

But then Cemetery Man’s story takes a different turn – Everett’s character begins to see Her on a few different, unrelated occasions as a typical living person, and this part of the story somehow reminds me of the vibe of Stephen King’s short story called The Man Who Loved Flowers. The moment the main character in this film watches his supposedly dead lover leaving in a car with her boss, is perhaps the one where Everett’s face displays its most genuine emotional and psychological state in the whole film: a sheer confusion. Not long after this happens it becomes increasingly clear that Cemetery Man is just as much a story about Dellamorte as it is about women: a young widow (mentioned before); a woman who’s got fear of penetration, but eventually becomes a rape victim and, what’s more, agrees to marry her rapist; a sex worker who, much to Dellamorte’s dislike, makes income out of using the word “love” (and gets punished for that). At the same time the reality of Dellamorte is gradually turning into one of a maniacal killer of people who’ve never been dead; he’s seeing talking statues while the face of Falchi’s character is a recurring one in situations that couldn’t realistically feature Her. (Because, for one, She is supposedly to have died. Twice.) One of those situations has him developing the idea of removing his genitals, and that, in turn, leads to the scene where director Michele Soavi (well known for being Dario Argento’s assistant back in the day) gets to play with the concept of castration anxiety. Later on Dellamorte finally decides to deal with some young guys in town, who’d been spreading gossip about the man’s alleged impotence. Approximately at that point, it seems, the Cemetery Man has had enough of Buffalora town.

I guess that when all you have known is a small town and graveyard, anything that doesn’t resemble that world doesn’t seem to be a world at all. You could be living in a souvenir representing someone’s memories, not even being aware of it. It had become your world that long ago that you don’t even remember the moment it happened, and that’s just all you know. You are trying to be alive, but really; that’s not an aspiration, just instincts keeping you going. And yet, all you’d need to do is to step outside the world you know, leave that souvenir, and experience your instincts finding the environment they had originally been developed for.