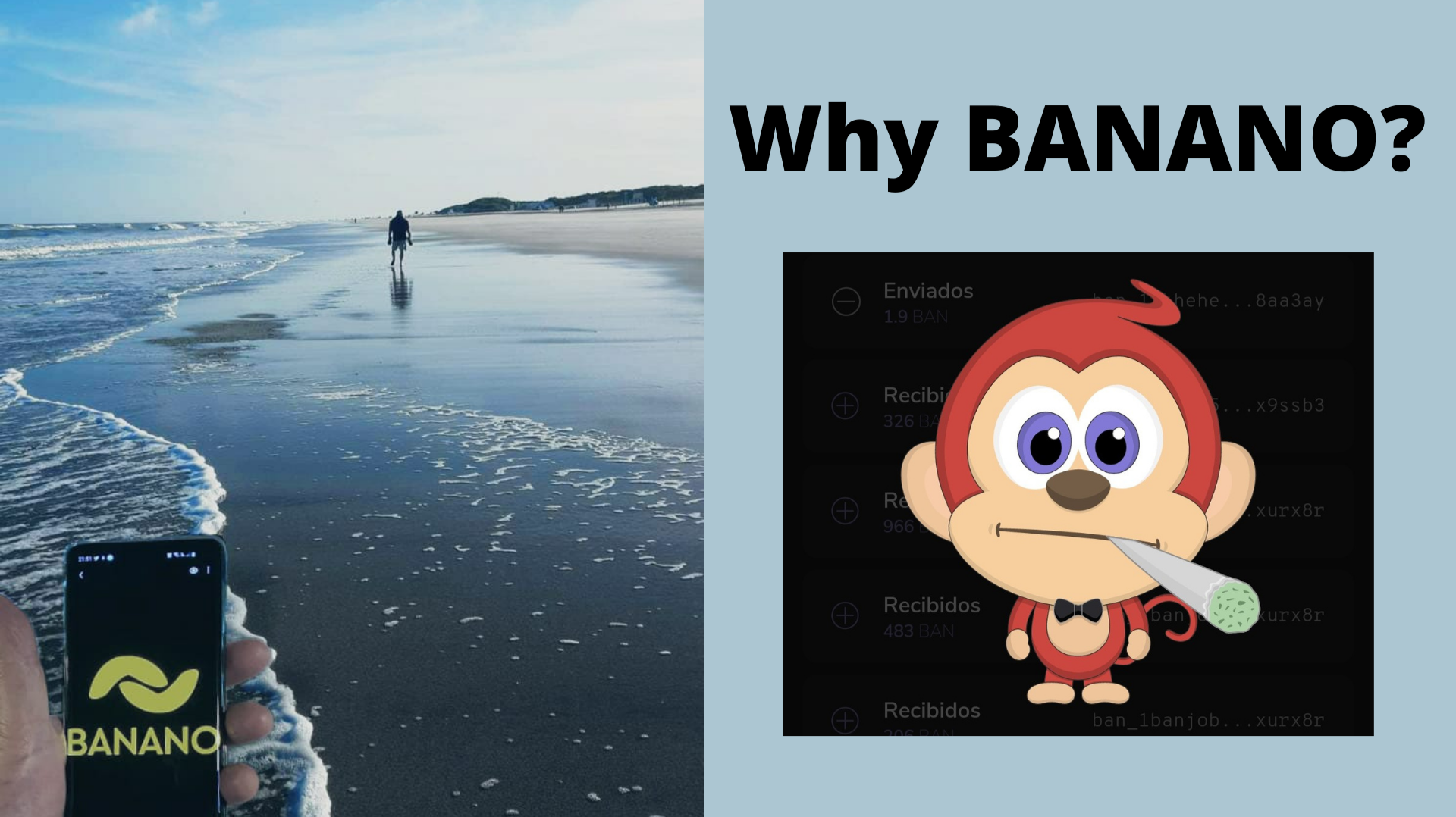 I wrote several times about BANANO here on Publish0x. Since the beginning of 2020, I studied this project and fell in love immediately. I was one of the first to receive BANs in my Kalium wallet by participating in the contests, games, giveaways, and airdrops envisioned by what to me constitutes the brightest tribe in the crypto-sphere. I also received as a gift and with a lot of luck a good number of Cryptomonkeys (monKeyfied NFTs) that give great value to my Tokenhead wallet, and I regularly read the Weekly Peel to find out about the thousands of things that I miss because the day only has 24 hours, and some must be dedicated to rest. 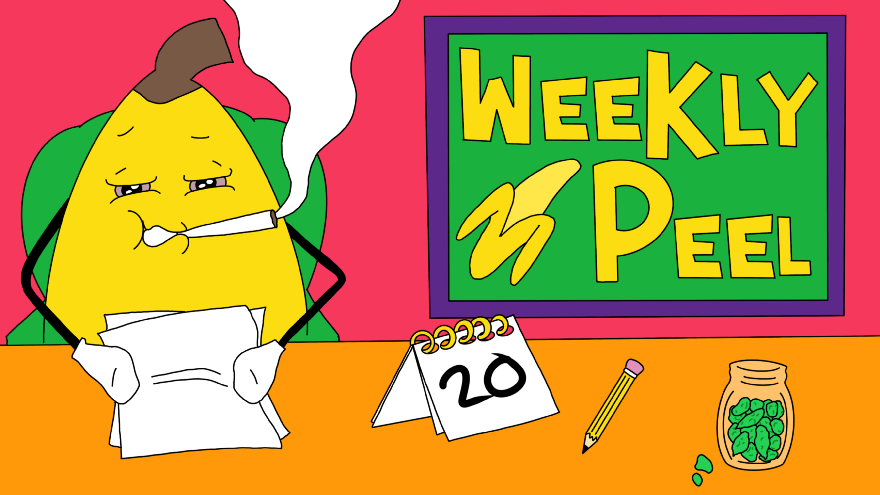 I was always very amused by the fact that my Kalium wallet identifies me with a unique monkey. No two wallets have the same monkey. That makes us individuals. 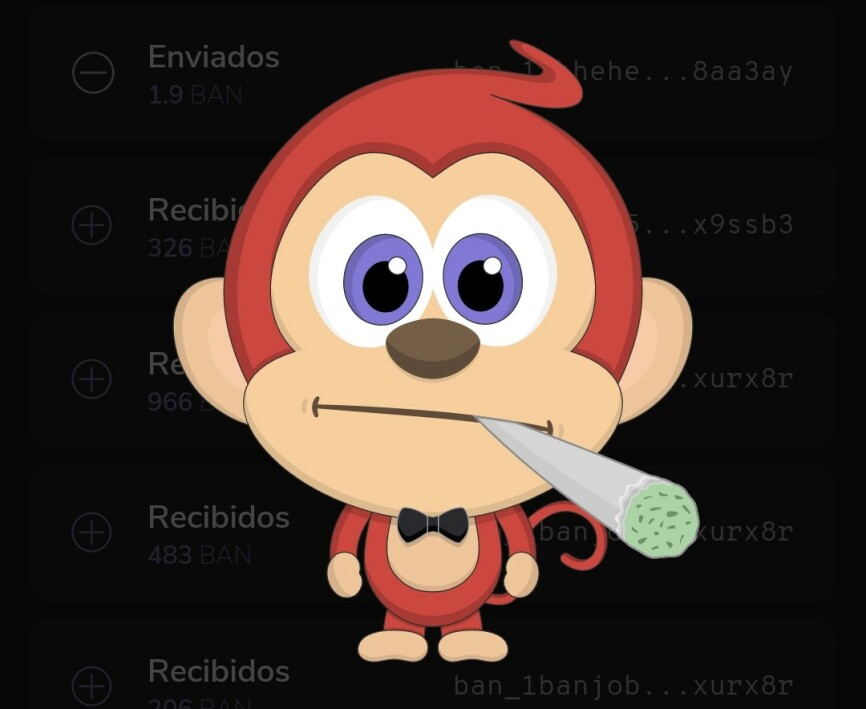 But today I am interested in approaching BANANO from the point of view of what it represents for a lifestyle based on anarchy. Sorry to the tribe if I get a little serious, I know that it is not the right thing to do and that we have to live with joy and show our craziest side every day. But every so often, a little seriousness doesn't hurt, if only to compensate for so much creativity.

Why BANANO? Simple, because BANANO invented the Metaverse. BANANO "is" the Metaverse. BANANO created a currency that is transferred P2P without costs between the inhabitants of a Metaverse-island-tribe, just to value the effort that community members make to live in a fun world. Just like in an anarchic community. Money has the value that members give it, and they do not need any market to put a price on it.

Today the whole planet is talking about the Metaverse and its infinite possibilities in terms of quadrillion dollars. Pure marketing. If you had tuned into BANANO a couple of years ago, you would see that it was this tribe that created the Metaverse. The international BANANO community "is" in reality the Metaverse, created from the concept of fruit, a mineral, and an animal. Activity on social networks, especially on Discord, makes this Metaverse a unique space to talk about any topic. It is as if it were a planet made up of islands in which each group of inhabitants plans their lives according to sustainable patterns, in order to make the environment worth living.

I continue to imagine my utopia as a world of "islands" (tribes?) that live far apart, without the need for contact to exchange goods and services, which is the model used by the capitalist system to exploit the colonies and "add value” to raw materials. In reality, they are sincere, they add value, but only for a handful of shareholders who by force and through bribery of government officials, obtain the resources they need, hanging from a set of international organizations that dictate and control the laws that make them act "legally".

Both socialism in its various formats, as well as the so-called neoliberalism that is neither liberal nor new, are the two sides of the same coin that is called the capitalist system. So, both need a Central Bank that prints promissory notes to regulate consumption and the allocation of money to the corporations that paid for the presidential campaigns.

In anarchy there are no hierarchies, there are no banks, there are no governments and there are no "owners" of resources by force. There is a scheme of "individual property" and not private property, and all needs are at the disposal of the "mutual", whose Nash equilibrium is assured if each of the individuals that make up the tribe can prove a "Proof of Planning”, which is the consensus protocol that ensures that the development of the mutual is sustained over time and grows in efficiency. In the extreme, in anarchy, there is no money, as it is known in the capitalist system. Money is not needed because there are no goals of power and therefore accumulation does not make sense, since the accumulation of money has power as its sole objective. Needs are met through the process of "mutual" in harmony. (I wrote a series of articles developing these themes on my Publish0x blog “SirGerardThe1st Grimoire”).

Now, let's see a little what the DAG technology consists of, which is what BANANO uses to stabilize its operation, as opposed to the better-known accounting settlement technology that is the blockchain.

DAG is a non-linear data structure that replaces the blockchain for storing distributed ledgers. The biggest challenge with this technology is that it is much more difficult to implement smart contracts than with blockchain technology.

DAG technology is a mathematical monstrosity long before the blockchain. For many, myself included, it is the natural evolution of the revolution that blockchain proposed. DAG stands for Directed Acyclic Graph. The DAG organization consists of a series of "drawings" that make up a graph with interrelated elements that allow information to be organized in a targeted manner.

Blockchain is a serial process. A block depends on the previous one and they all form a serial chain. DAG is a parallel process. It is more like a tree than a chain. There is a central trunk and thousands of branches that are related to each other. DAG allows the development of an anarchic organization. Blockchain lends itself much more to the appearance of whales and accumulators of currency.

DAG allows each terminal to be a "validator", so that the processes do not have bottlenecks, as in PoW systems, and are therefore cheaper.

DAG allows the greater speed of transactions since the local processing of each validator and the parallel settlement result in a considerable increase in speed. DAG allows great scalability thanks to the independent calculation of each node. DAG provides greater security because a large number of degrees of inputs and outputs prevent malicious manipulation of the nodes.

NANO was one of the first currencies to use DAG technology. BANANO is a fork of NANO. At the moment, BANANO is presented as a “joke”, although I think that intelligent people realize the difference between BANANO and the meme coins that attract thousands of candidates to become millionaires in a few days.

BANANO is distributed freely among the members of the tribe, in the same way that the inhabitants of an anarchic island exchange value for their professional contribution to the “mutual”. Regarding individual property, each inhabitant of an anarchic island can create an art object, an event, or an engineering tool or process and register it as NFT in the island's DAG, where it will remain forever recorded as an object of his/her own property.

In the anarchic island, only the BAN circulates and it can be used for whatever one wants. Any accumulation process would go against the accumulator because it would lower the value of the BAN since a currency only has value if it circulates. If few have it, the currency is useless.

But today, only a few of us see BAN with those eyes. I fear that a good portion of the curious is viewing it as another asset to speculate on.

In the following graphic, I show you my Kalium wallet a year ago and today, so that you can see what the capitalist system did at the moment with an object of the most elaborate engineering like BAN. 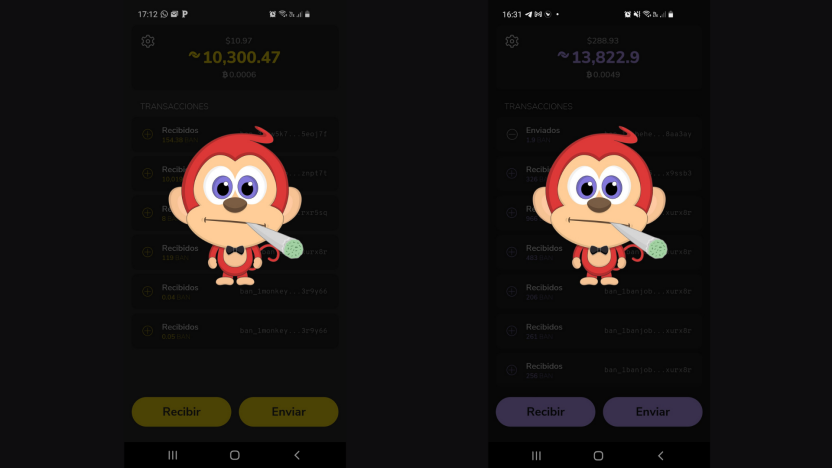 My most valuable collection of NTFs in my Tokenhead wallet is the CryptoMonkeys collection, valued in WAX.

This cannot surprise us. We are actually witnessing the historic Wall Street game, now with cryptocurrencies and NFTs. Most young people who approach the crypto-sphere do so with the promise that they will get rich in no time and stop working. This is a party for the whales who receive money from the least thought of places, having the ability to manipulate the markets at will. And most of the projects are designed with that objective, to create a currency of “power” that attracts professionals and amateurs with the aim of creating markets where there are none.

However, the BANANO project is really supported by an indecipherable tribe, overwhelming of creativity, which makes us all stay together to have fun and enjoy life, contributing to a "mutual", relating to people from different parts of the planet that have the same objective, which is to create a self-sustaining community that receives and delivers “money” in recognition of the work that an artist, engineer or developer did. Not to speculate on the value of the currency and get rich.

Many of the NANO developers are active on BANANO. They share the code and the spirit of sustainable transaction.

BANANO cannot be bought with fiat, if not with another crypto active and only on some exchanges.

Here I show some of the pairs and exchanges that CoinGecko lists.

And also from the same source, I show the quotation values.

I don't like to see BANANO on these charts. I imagine it as the currency "without commercial value" of my anarchist island. I imagine it as the award for the individual effort of an artist, a musician, a poet, an engineer, an electrician, a mechanic, a doctor, a veterinarian, who contributed to the "mutual" so that the "mutual" is sustainable for many centuries and for many generations.

I imagine a world populated by islands that support each other. BANANO is a fundamental tool for a system like that, as long as it is a currency "without commercial value" because in anarchy money is not needed.

BANANO is the currency of anarchy because it is freely distributed and rewards those who are benefactors of the “mutual”, not those who have the most power or who accumulate the most. Every BANANO that I receive, for almost two years now, moves me enormously, because it may have been the decision of a man or a woman from Indonesia, or from Estonia, or from Uzbekistan, whom I not only do not know, but probably never will, but that they considered that I was deserving of that BANANO that they sent me. It makes me feel so proud. That is my utopia.

I had my children and nephews make a Kalium wallet, and I pass BAN to them regularly when they contribute something to my ecosystem. I want to educate them in this type of currency, not in those of the dogs whose precipitous fall I see as inexorable. I believe in a world full of sustainable efforts when at last the predatory capitalist system based on the accumulation of power collapses under its own weight and the majority of the individuals on the planet understand what anarchy and the transfer of value mean according to the contribution to a “mutual” sustainable for generations.

BANANO, please, may the spirit of anarchy never fall!

Tokens are the best coordination tool that the crypto-sphere has created. The tokenization of the economy allows us to forecast where future generations will allocate investments. It is a turning point, the birth of a new economic model that is absolutely inclusive and permissionless, and, best of all, without middlemen.