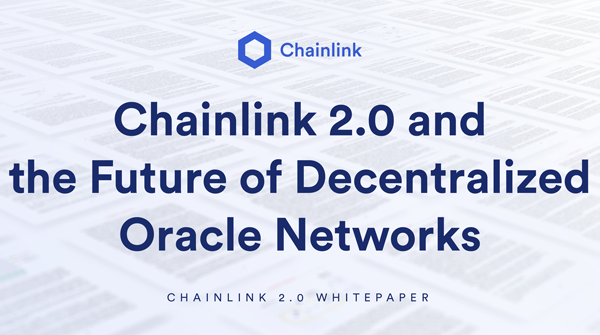 Chainlink is a decentralized network that puts data and information from the real-world on the blockchain through smart contracts via oracles. Smart contracts are one of the most important concepts within blockchain technology, using self-executing contracts with terms & conditions inside them. Chainlink is powered by their token LINK, used to pay for services on the network.

In order to understand Chainlink, I’d recommend reading our page on smart contracts first. This allows you to learn more about the technology behind Chainlink, and how this helps to put real-world data on the blockchain.

This resolves a big ‘issue’ where off-chain and on-chain data aren’t using the same format, and have therefore not been able to be easily linked with each other.

Chainlink is powered by so-called oracles, which is basically a software intermediary that helps to format off-chain and on-chain data so that it can be connected with each other back and forward.

The term ‘intermediary’ is often seen as a bad thing in the blockchain space, as what we’re essentially all try to create is something that’s decentralized, rather than a network controlled by intermediaries.

Chainlink is aware of this and therefore chose the route of using nodes, ran by community members and token holders, to decentralize and secure the network through individual oracles and APIs. This removes the single-point-of-failure and therefore is much more secure than if Chainlink were to use just a single oracle.

The protocol picks up this request and triggers an event to collect the real-world data needed, and then puts this data in a newly created smart contract on the blockchain. This contract is called a Chainlink Service Level Agreement Contract (SLA).

Now, there’s all sorts of blockchain networks from Ethereum to Polkadot to Polygon, Solana, and many other ones.

Chainlink has stated they aim to support any network in the future and is currently already operating on many networks, providing data to many smart contract applications. Such as, Aave, Synthetix, Ampleforth, Kyber Network, Yearn Finance, and many other ones.

It’s not just used by smart contract applications though. There’s also Chainlink Verifiable Random Function (VRF) used by many blockchain games and NFT projects. As well as developers use the protocol for e.g. sports and weather data.

Even though Chainlink operates on various chains, their LINK token is an ERC-20 token with the additional ERC677 functionality to allow token transfers to contain a data payload.

As you can imagine, Chainlink relies on many different parties processing and validating information. In order to keep this as decentralized as possible, it’s encouraged to run a node and help run the network. This is done by incentivising node operators for the data provided from external resources, for processing this data and submitting it on the blockchain, and for their overall performance.

In order to run a node, operators are required to have skin in the game and stake LINK on the network, which could be seen as a security deposit in case the operator has malicious intends.

LINK is also used to pay for this data and the Chainlink services, making it the utility token powering the whole ecosystem. The costs for this depends on the at that moment demand and supply for data processing by the available nodes.

Where to buy LINK?

Chainlink is currently ranked #12 on Coingecko and is one of the largest projects around. That said, it’s available on very many exchanges.

What do we think about Chainlink?

Chainlink is a huge project that bridges a major gap. There’s obviously a lot of demand for their services and the number of partners, connected dAPPS and supported blockchain networks continues to grow.

That said, I believe it’s a must-have token for anyone that’s interested in holding large cap altcoins and is satisfied holding tokens long-term. With the continued growth of DeFi and dAPPS Chainlink is going to see continued growth.

LINK is a relatively safe long-term pick that’s suitable for most people’s portfolio. If you’re interested in learning more about their services, then definitely check out their website.

This post is for informative purposes only, I’m not a financial advisor. I have not been paid for this post, this post is out of personal interest. I do currently have a position in LINK.