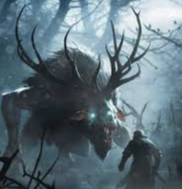 The Monster Next Door

(WP) The Monster Next Door

The thing about being immortal was that it sounded like fun and games, until you realized that you were living through immeasurable stretches of time by yourself. Sure, you got to watch empires rise and fall, be at the deathbeds of monarchs, but it was all so monotonous. Humans craved blood and violence, just like monsters; they just hid their true faces behind honeyed words and bright smiles.

There were so many songs you can listen to, and books you can read. Even immortals were not immune to restless ennui, which was what led Octavia to a crowded bar, sipping at a dirty martini. Alcohol never lasted long in her system, but she liked the way it made her feel.

A group of young people were sitting in a booth in the back of the room; Octavia could smell them, the tang of metal and blood and the sour, sweaty odor of their skin. They were speaking quietly, but her sharp ears picked up every word they exchanged.

There were four of them, two men and two women, munching on bar snacks: mozzarella sticks, fried pickles, olives stuffed with garlic and feta. All but one had glasses of water in front of them; one of the men was nursing a beer. Octavia could smell it, and she resisted the urge to lick her lips.

“I’m telling you, there’s a monster in this room,” The drinking man said, taking another gulp of beer. “I can feel it.” Octavia smiled faintly to herself.

“Or you’re just drunk and confused,” One of his companions quipped, smirking bitterly. “We’ve been at this for almost six months and we still haven’t found a monster.”

“It could be possible that we’re not good at monster hunting.” Someone else said, with a blasé shrug of her shoulders. “I mean, we’re shit with weapons and even worse with strategy.”

“Why did we think that this was a good idea again?”

“Yeah, Cameron. Just because your dad was good at this and left you this weird legacy doesn’t mean we’re meant for the ‘art of hunting’ or whatever.”

Cameron frowned, and an uncomfortable silence descended upon the table.

Octavia could not help but pity this sorry group of humans; they were obviously earnest.

Then an idea began to form inside of her mind: What if she let these bumbling children capture her? It had been centuries since she had messed with what her kind called ‘the other white meat’. Where was the harm?

“I’m telling you,” said the man, brandishing his beer bottle. “There’s a monster in here. I can feel it, and my gut never lies.”

“Or you’re just hungry, like you were last time. Come on, Nash, give it up.”

Octavia finished her drink, her limbs light and springy from the alcohol, and paid for it. It was showtime now.

She slung her bag over her shoulder and made a show of passing their table, slowly. She caught the eye of the one called Cameron, and she smiled widely at him, showing off her pointed, sharp fangs. Her eyes glinted gold at him, and she walked out of the bar.

She got halfway down the street before they caught her.

Now the real fun would begin.