By barzah | The world of cryptocurrency and blockchain | 8 Jul 2019

Be careful to invest in all various products with the lure of fantastic profits. In this matter, you need to be on guard with the ICO offer with a very high return promise.

Not all crypto money eyes will skyrocket as early as Ethereum or want to be as high as Bitcoin at this time. Many technical considerations must be taken into account, where some aspects, of course, would be very difficult for investors to understand without a background in the Blockchain Development field. It can be that once something ICO is released to the market, in fact, the value does not go up or after skyrocketing for a while, but in fact, it goes down extreme to its value.

Conversely, for newcomer investors, the Bitcoin market can be said to be in the "bubble". The case is not there that can recognize when the bubble is about to break. Until when this post was broadcast, Bitcoin had faced Hard Fork 2 times and had spread 16, 673, 562 units of the optimal 21 million units.

Not only that, some countries or financial institutions still do not want to explore BTC like legal payment equipment. In China and South Korea, all forms of bailout from the ICO are strictly prohibited. On the contrary Vietnam eyes of crypto money are prohibited from being spread starting early in 2018. So, if you still want to invest in Bitcoin, you alone want to bear the effects themselves entirely.

Because of this aspect, like a smart investor, we must think of the following factors

Bitcoin has a weakness in terms of transparency, the Blockchain system is anonymous. The impact is that it is difficult for the authorities or other users to recognize who is participating in a transaction. The need for this anonymity will always be debated, but actually not the entire Blockchain system requires anonymity.

It continues to be an easy thing for Blockchain innovations to be adopted or accepted by the community of users, so that it continues to be flashy as well as the expansion of its network. It's like Ethereum with its Cross-Chain feature, so it can be exchanged for other blockchain networks. 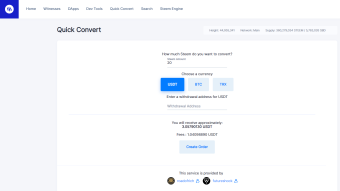 Super-convenient swap: My frank review of the new SteemScan exchange.