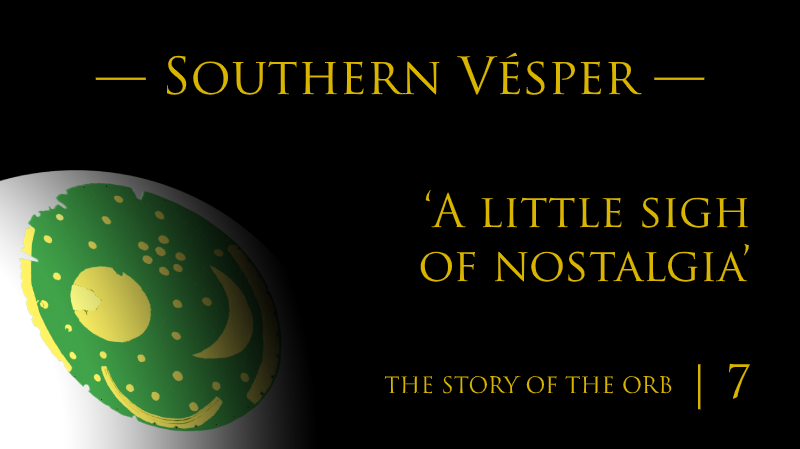 Sara and her father Mentesúfis, with the help of the four men, brought the large wooden table to the beach, and laid it with the festive and well-washed down meal that had been prepared in the meantime throughout the morning, with the help of Gui. Vésper and the kitchen did not go together; that being the case — and to keep him from getting in the way —, he was asked to row in the little boat with one of the four men to the Perihelion, so they would drop the anchor and untie the painter that bound it to the island. The suggestion left him very happy and excited; he would enter his pilot boat for the first time, smell it, touch it… In short, court it.

As he distanced himself from the beach, he saw the cheerful agitation of his friends; Sara pursued Gui, forcing him to sea bathe as an alternative, probably, to some task he detested. Mentesúfis gestured, scolding Sara, the other intriguing men laughed, throwing back their heads. But Guilherme was like a lighthouse, very straight, with his feet near the sea watching him, observing attentively at a distance, it seemed that his eyes were no more than two spans away… however Vésper saw himself getting further away with each stroke, until they hit the hull of the pilot boat; he looked back, caught the rope ladder that the man was already holding out to him, and climbed inside, while the other one fastened the boat, coming up right after him. Once up there, he looked again at the beach and the old man was already headed in the direction of the willow tree, where he remained seated as usual.

Vésper and Gui went out whenever possible on the Perihelion with the four men — they never went very far, just enough to test the vessel and bring back some catch. One day, returning at the end of an afternoon from fishing, they found the old man lying under the willow tree: he seemed to be asleep, but they soon realised that he had died. He wore a linen tunic that covered his body down to his feet; in his left hand he held two dried rose petals, with their colours already faded, and in the other hand a small tangle of roots with the earth still attached, from which a minimal green stem stuck out. Gui explained to Vésper that ‘after the ashes launched upon the passage of Austro from the willow tree, the monticule of roots shall be planted at a point opposite to that, and at the passage of Boreas, as soon as the opportunity arises’, as was the wish of his father. Meanwhile, the small plant was put in a vase, awaiting its day.

Two years had passed since the arrival of Vésper on the island of Nana, and for almost one year he and Gui had been alone. The warm season of heavy rainfall was approaching. Lying on the sand, under the protective shade of the old man’s tree, Vésper dreamed of his homeland, his longing for his parents Aira and Dérop tightened his chest: he recalled the happy unconcerned little boy, in the safety of the unconditional love of the two of them, and the painted walls of the water garden. At that moment, he wanted to return and rethink his desire for adventure and travel, and tell them personally how much he loved them. Wandering through time, another memory suddenly arose:

‘Shortly before his death, Guilherme had cooked over the fire of the old stove a fish stew with tomatoes, bay leaves and olives, for supper for the three of them; on the side, he prepared an infusion with the leaves of various plants, and, from time to time, he brought his fingers to an empty bowl of white porcelain, made a gesture as though removing something, and then threw it into the infusion; he said this was a magic herb that only existed for those who believed in it, and that cured all ills; the elders had given it the name “Panacea”. In another little clay bowl were some white and red rose petals, that reminded Vésper of the other two in the letter from his parents. Gui laid the table and his friend lit the five-burner lamp. While he raised it through the pulley, sustaining it over the table and securing the cord on the wall hook, he observed the almost ritualised gestures of the old man, and when the latter turned with the steaming platter, and a smile of satisfaction announcing that the food was ready, Vésper, as they were sitting down, asked:

“Those petals, the ones in the letter, what is their meaning?” The old man had begun to serve them calmly, the two youths were passing him their plates, which were returned to them filled. He insisted: “Not that there has to be one, but I noticed the container with identical petals and…”

The old man ate with a smile, the two boys looked at each other; Vésper gave up and commented on the delicacy, Gui acquiesced with his mouth full while he soaked the water bread in the sauce, and washed it down with the help of a new wine that his father had made weak, so that the two young men could drink it from time to time without it clouding their judgement — however, Vésper rarely drank spirituous liquids. Finally, the old man went to the stove, where the wood was now just embers, and returned from it with a cinnamon and honey cake, from the little bowl he removed the petals, which still retained their perfume, and scattered them over the empty plates. Next, he cut three slices and distributed them. The two youths were preparing to attack the irresistible sweet, when he began:

“It is unwise to ask questions on an empty stomach, and even more so to try to answer them. If one leaves it for after the sweet, the question does not even matter anymore, much less the answer.” Vésper and Gui watched him, waiting. He continued: “The white ones are desire, peace. The red ones are the unspilt living blood, life.” He said it looking at nothingness, as though some strong memory had overtaken him, and then he spoke of the rose bushes in the water garden of Aira and Dérop. Vésper noticed that his eyes, as he spoke of his friends, took on a greenish water hue, and he could have sworn they were tears, but none allowed itself to travel down the hardened face, the casing for such a soft soul.

“Is there some special reason why they sent them?” Vésper had already forgotten the cake, Gui however, on the quiet, was already on his third slice. The old man looked him in the eyes, as he always did when things were serious, and, taking on a sullen expression, said:

“The reason, the only one, is due to the immense love they have for you, as much as all of the sea and all of the land for us.” He paused. Vésper himself had let out a little sigh of nostalgia, the old man smiled, put the fork in his hand, and ordered him gently: “Come on, eat your piece of sweet.” The youth tasted the cake slowly, half absorbed, while the other one noisily scolded Gui, who had already devoured five slices, and the effects of gluttony were already becoming felt: he excused himself and, clutching his belly, ran out the door to the nearest thicket. The old man, pointing with his chin to the wide-open door, observed in a good mood: “My gluttonous son, your friend, when he comes back he will have a cup filled with an infusion of purifying herbs and Panacea; it will be good for his gut!”’

Time marches on our existences like a determined and implacable soldier.