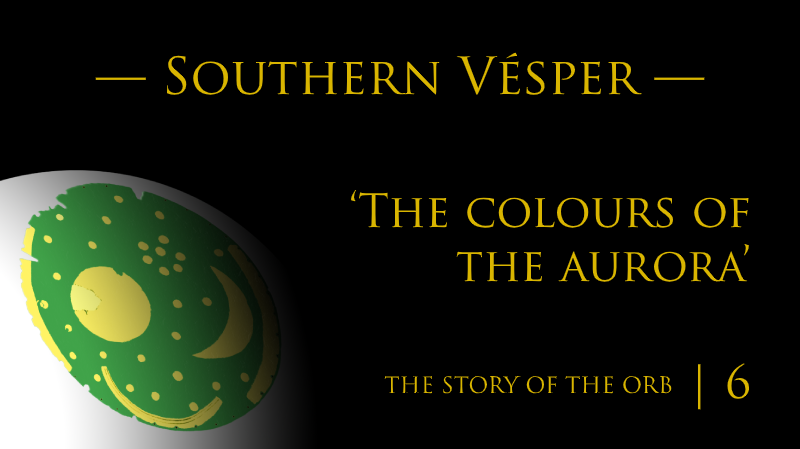 It was already dark when he reached home, the lights of the shipyard were turned off — which he found strange; at that hour they were usually still working. He saw from the window of the house Guilherme and Gui, who dined in the company of the four men. He kept watching them for a while from a distance, and decided he did not want to speak with anyone, or even to know about anything else. At least, not on that night… He entered the house without making a sound and went to bed, falling asleep thereafter, and he dreamed: he dreamed of seven-year-old Vésper, and of an anticipated reunion under an unknown starry sky, the solar winds fidgeted the small world, provoking fascinating coloured waves, staining it with green, blue, violet and red, like someone throwing lively paints against a black canvas. A small bird flew in his direction, bringing tied to its little feet the colours of the aurora, which spread as they touched the sea, like watercolours. Suddenly, he saw himself holding hands with a girl, both of them with their backs turned. It was Gaia, whom he kissed softly on the lips. When he moved away, he saw that the face was, after all, that of Sara. He felt himself shaken, and then he awoke with Gui grabbing his shoulder, stirring him, asking him to hurry up; he was urgently needed at the beach.

The sun had barely broke, Vésper, still half asleep, tried to get dressed under the pressure that his friend fostered, suggesting him even more rapidity. Finally the two youths came out on the beach, Gui came out in front of Vésper, who followed him with his eyes fixed on the last button of the shirt he was finishing buttoning, his friend stepped aside, and the young man saw before him, outside the shipyard, the most beautiful and elegant vessel ever. To the side were the old man and the four men displaying their famous smiles; above their heads could be read on the upper part of the hull: Southern Vésper.

‘It is a pilot boat. “Your” pilot boat’, said the old man, approaching the speechless youth. ‘So, is it to your liking?’

‘The breath and the words, it seems… Now you need only chart your routes, and may the good winds swell your sails, whose silk, handled by hands of timeless wisdom, shall have been spun and woven with the threads of spiders, a method said to have been taught by the gods, ensuring the invulnerability of the sails; in exchange, the men would never cease navigating… Be that as it may, I only know that all this makes the shipowners of the Northern Cliffs my best customers!’ His tawny face with sea eyes conveyed triumph and serenity, looking quite young. Vésper could have sworn that indeed, at that moment, the old man was almost his age. Over his astonishment, and with overflowing joy, the youth embraced Guilherme and Gui, laughing amidst thanks, unable to take his eyes from the pilot boat, as though it were an enchantment.

It was truly special. He had already seen other vessels built by these artisans, whose mastery had always amazed him, but this one was, without a doubt, the most exquisite: from its slender lines with the two imposing masts, to the singular Latin sails, to the delicately worked wood carvings decorating the outsides of the bow, with the peculiar anchor stowed at starboard, in contrast to the pragmatic simplicity of the broadside painted in white, letting one see — because it was still on dry land — the strong piece of iron that determined a keel capable of ripping through the most obstinate of seas, and the submerged hull all in copper, that bore the signature of the knowledge of the four men about metals. Gui made it a point to note, with pride, that all of the wood used was from the island of Nana.

After the noisy expressions, and justly praising the six men, Vésper addressed Gui, admitting that he should have already known him better and have at least suspected that, out of all that secrecy, the result could only have been good! He looked at the old man who was staring at them and, before he could speak, he was overwhelmed by the strange sensation that Guilherme was no longer there… — the latter, however, remained standing in front of him, merely furrowing his brow. Vésper quickly said, with a smile:

‘… If we know how to fill in the time of waiting!’, completed the old man. This time, and unlike a little while ago, with his heavy and old countenance. Yet, at the same time, serenity remained with him.

Vésper looked at the beautiful vessel, gazed at it, and without thinking brought his hand to the pocket of his trousers, felt the folded letter, squeezed it gently and, smiling, like someone who just had an epiphany, placed his other hand on the hull and announced:

‘I give you the name of the soul “Perihelion Southern Vésper”.’

At that moment, the four silent men cut the moorings, and the vessel slid down the rails plunging the keel, like a virgin receiving her lover in an irreversible surrender. They all remained mute observing the scene, hypnotised, until the Perihelion Southern Vésper stopped smoothly, held by the painter solidly tied to the trunk of the old man’s tree, the large willow that, against all probabilities of being a tree with great longevity was, according to him, ‘the first inhabitant of the island of Nana’ as he used to say, stroking it on the hard, gnarled bark, as though greeting an old friend and accomplice in life, when he sat leaning against it for his naps, cradled by the music of the water from the rivulet stirring tiny stones in passing, in a duet with the twittering of various birds, and, little by little, the crescendo became a symphony. Guilherme said that this was how he washed his old soul.