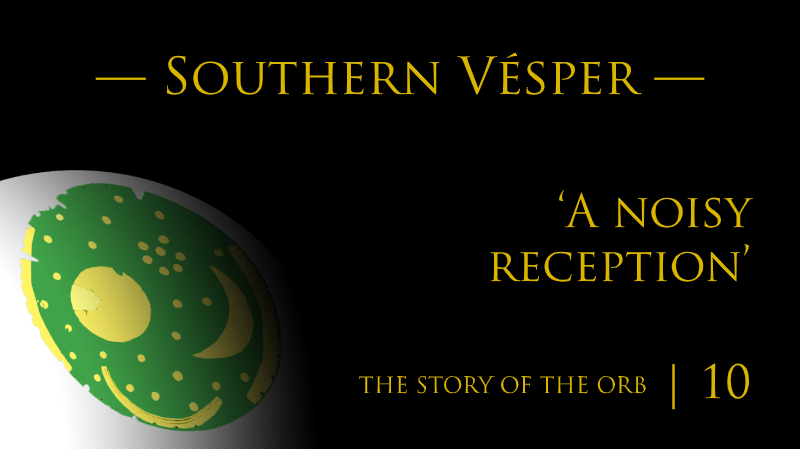 Gui stood up and picked up the lantern. Upon opening the door, he received the greatest scare; everyone turned around to see what it was about: right there at the entrance, illuminated by the light from the interior of the house, were the four men seated on top of an enormous trunk, waiting with backs turned to each other, with a quite smiley air as always. That rather unusual image reminded Vésper of the day of his arrival with his huge suitcase; they were truly intriguing, those four, one had never heard a word from them, they only laughed and nodded, they seemed to communicate among themselves in their own language, perhaps that of looking… Besides, their physical resemblance suggested a familial relationship, perhaps brothers or cousins, since they appeared close in age.

Gui and Vésper invited them to come in and eat, but they did not move, leaving the hosts puzzled, they just laughed and gesticulated in the direction of Mentesúfis; he went to them making a small gesture: it was enough for them to release the mysterious trunk. As they entered, Sara offered them places at the table, so they could banquet.

At this point, Gui had already moved away in the direction of the shore — with the lantern lit, in order to be able to tranquilly read the last words of his father. Mentesúfis looked at Vésper, who did not take his eyes from the curious trunk; knocking it lightly twice on the lid, he said to him:

‘This is the same on the top of which your friend forgot part of your present…’, winking at his daughter. Sara removed from her slender white neck a little ribbon, previously hidden by her dress, from whence hung a key which the young woman promptly handed to her friend. Upon holding it, Vésper could feel the metal, still warm from contact with the young woman’s chest, leaving him perturbed for a brief and disconcerting moment. Without warning, the image of a little girl from his childhood jumped the ‘fence’ and took control of his thoughts for a few seconds: it was the face of Gaia, happy and bold, with whom he played in the summers of Pan, and to whom he had made a promise…

‘Did I not tell you, my father?! Today Vésper is not around, he is on the moon more than ever.’ And she incited the young man to open the trunk, who excused himself clumsily, feeling a bit vulnerable given the nature of his distraction. Mentesúfis abbreviating the moment, and full of anticipation to see the boy’s face, said:

‘Inside is the other part of your present. Go on, open it!’

Vésper did so. In front of him, exquisitely arranged in the enormous cherry wood box that was older than all of them put together, lined in silk, could be seen the spines of the first layer of books with their argent letters revealing the titles: from Sanskrit texts to the Greeks and Romans, from the Iberians to the Bretons, from the most remarkable philosophical essays to the monotheistic bibles, and lastly, even more fascinating, the compendia of natural sciences where he recognised some names from the glorious times, to which his father Dérop referred innumerous times, to explain to him certain mysteries of life, and more. Vésper was astonished, he was beside himself with so much happiness, and at the same time he told Mentesúfis that he could not accept it, it was too much for him to part with all of that treasure which had taken more than half his life to amass. He spoke while sweetly rummaging through the exemplars. The older man, sitting there, calmly took in the excitement of the youth, the sparkle in his eyes every time another title was found…

‘I have read all of them, some of them twice’, said the Master. ‘Now it is your turn, although you already know one or another. I insist that you accept them, they will be more useful to you, certainly. Besides, in the library there still remained several hundreds of good ‘old Friends’ with whom I have to catch up on many conversations…’, Mentesúfis said with a jokingly serious air.

Meanwhile Gui returned, facing a noisy reception from his friends. The old master carried on his back, bound by a leather strap, a narrow leather tube, which he carefully removed and handed to the young man.

‘I hope you like it, it was Sara who chose it.’ Gui thanked him with curiosity, removed the small lid, and from the inside slid two original watercolours: one represented a beautiful Lusitanian caravel, and the other the island of Nana seen from the sea, both richly executed by Vaz, Sara’s grandfather. The boy embraced the old man, kissed the young woman and, holding her, whirled with contentment, starting to hum. His voice was joined by the others, minus the four, those just laughed, as always. And thus, everyone sang and had a good time, eating and drinking, completely forgetting the time.

The night was in the wee hours when they finally gave in to tiredness. Gui thought it best that the four men stay right there, in part since they were already snoring. Sara and Mentesúfis went to sleep at Vésper’s house, next door. The youth gave up his bed to his friend and improvised with two straw mattresses, as best he could, places for himself and for her father to rest. Quickly, silence settled.

The Story of the Orb | Episode 11
Southern Vésper — ‘Naked contours’

Dreams that seem to hide realities. Mentesúfis fears for Vésper, and the latter for something he does not comprehend.