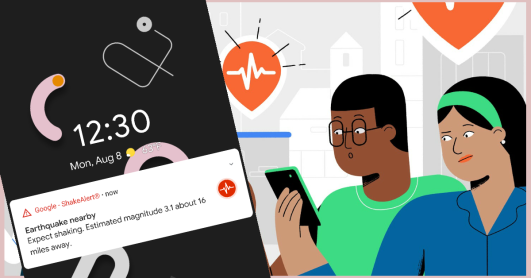 In the context of developing its smart programs, Google announced yesterday, Tuesday, the launch of an earthquake warning system for mobile phones with the Android operating system in California.

The phones will receive notifications from a system to monitor the first indicators of earthquakes, called "Shake Alert", which was created by the American Institute for Geological Studies and its partners on the west coast of the United States, according to what was reported by (AFP).

The system uses information from hundreds of seismographs in the state to send notifications to phones that "an earthquake has started and soon there will be a vibration," according to the system's website.

Mark said, "We saw an opportunity to use Android to provide people with accurate and useful information about earthquakes when searching for them, and send alerts to them within seconds so that they can take precautions in their surroundings if needed."  < on his official Twitter account.

He pointed out that Android smartphone users can also participate in a collaborative network to monitor shakes, as phones are often equipped with small acceleration sensors that measure movement and are thus able to monitor vibrations.

He added, "Your Android phone could be a small seismic device that connects to millions of other phones, forming the largest seismic network in the world."

Google explained that phones that detect what could be an earthquake can automatically send a signal to the data center, as computers analyze motion and location data in an aggregate way to determine if it is an earthquake.

Fear of a "great earthquake" is a sword hanging on California residents who live in obsession. The state is located on the San Andreas fault and experiences frequent tremors, but large earthquakes are rare.

Life is to see the fruit of your effort.