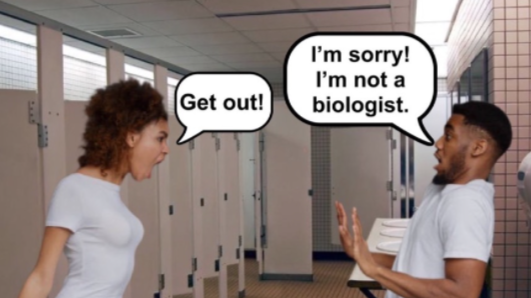 Sorry, but "females" are no longer valid

Babylon Bee (+ employees) suspended from Twitter - The Babylon Bee called Rachel Levine a man, so Twitter gave them the boot. Everybody knew the difference between a man and a women up until 5 minutes ago, so this is a blatant assault on truth in this country. 2+2=5. Mark my words, this is going to be a defining moment in the alt tech movement, as people divide themselves over basic concepts like this more. Learn more from Not The Bee here. And watch Biden's SCOTUS nominee REFUSE to define what a woman is here.

Mike Lindell is creating his own alternative social media empire - And apparently it costs him AT LEAST $1,000,000 per month. Why does this matter? Because we are going to see more entrepreneurs invest in parallel economies to protect themselves from the dangers and censorship of big tech. This is exciting stuff, because IMO, those who invest today are going to win BIG by the end of the decade. More on that here.

Ron DeSantis has spoken: Emma Weyant is NCAA campion - Since everyone (parents, GOP, etc.) is too scared to speak out against Lia Thomas DOMINATING women's swimming, Gov. DeSantis signed this proclamation. In short, he's leading the national conversation similar to how President Trump did, by controlling the narrative despite corporate press reporting. Yuge. Seems like the mad lad has bigger career aspirations on his horizon... hmm...

Inflation is at a 40-year high, so I guess we're doing stimmys again - It is so painstakingly bad at the pump that legislators are flirting with stimulus checks again. And prepaid debit cards to help us poor folk out. Yeah, because this worked out so well the first couple of go arounds... smh. Of course, drilling oil on our own land is COMPLETELY out of the question. Thanks Kamala.

Hey! Before you go!

If you find value in my content, consider supporting with a 1-time donation.

Have a blessed weekend,

In A World Flooded With Wokeness, Build A Dam!