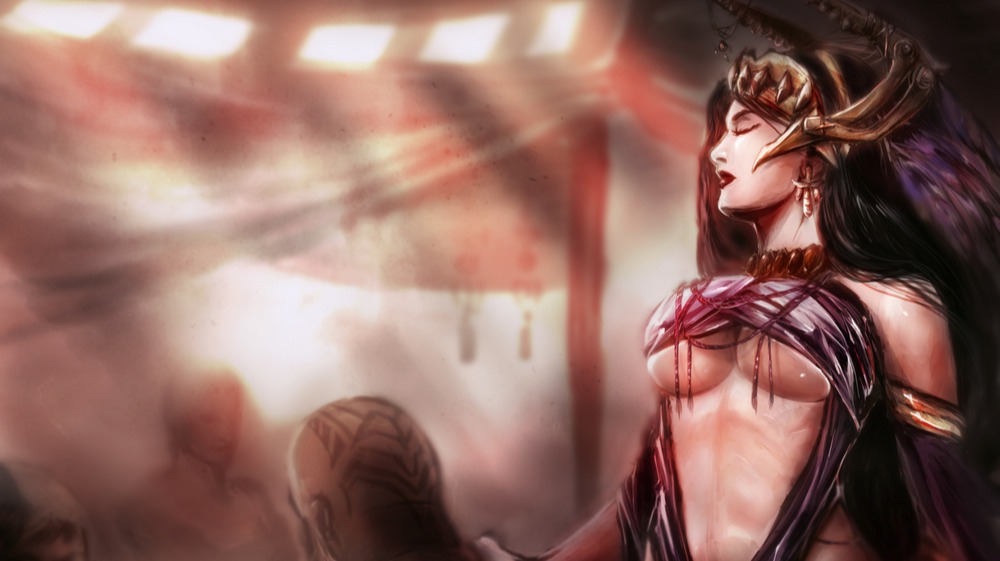 "People are like stained-glass windows. They sparkle and shine when the sun is out, but when the darkness sets in, their true beauty is revealed only if there is a light from within." 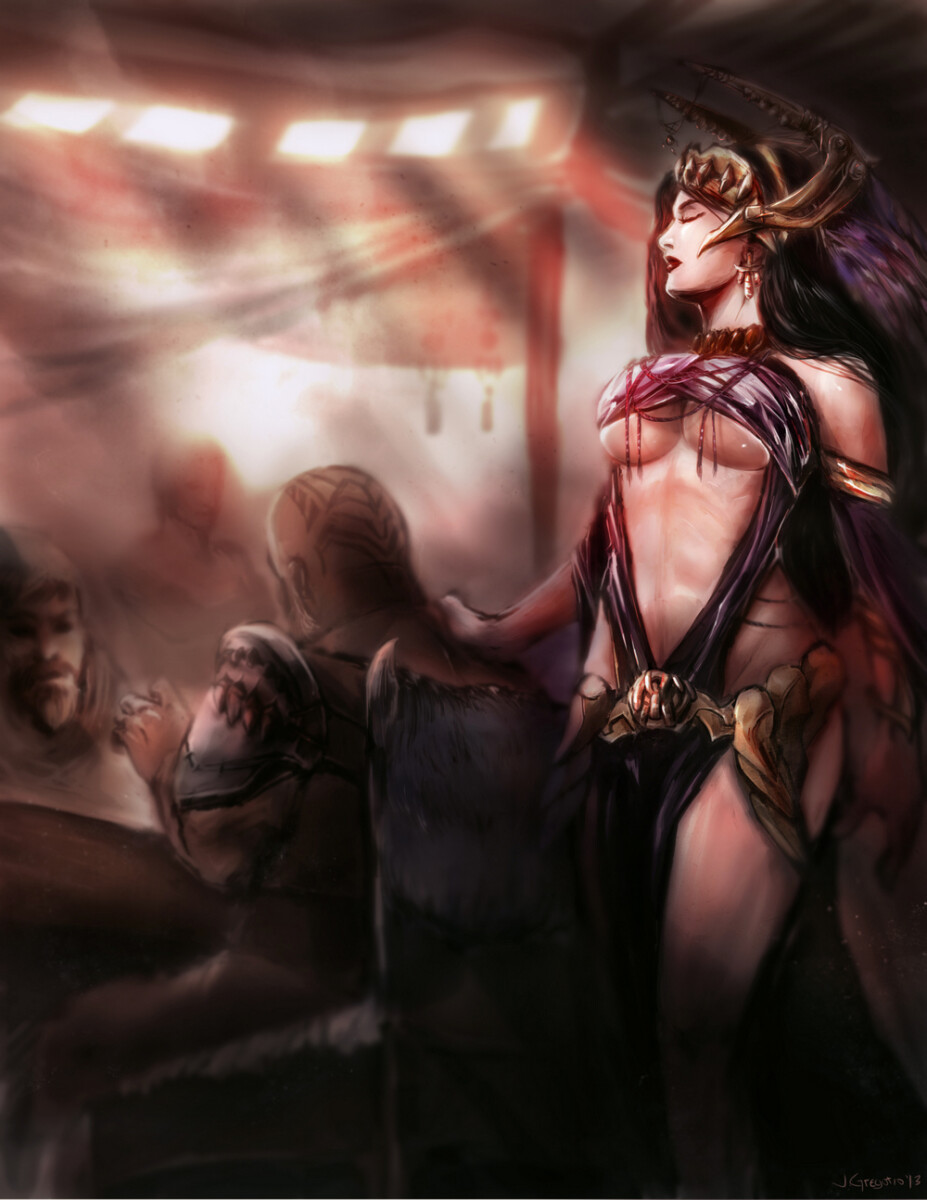 The High Countess Slovenia was a sight to behold. Her perfect form resplendent in the glorious glamour that her aide had cast upon her.

Israel was an artist of consummate skill. He had spent many years plying his work on the high-born ladies of Wreghan court and had gained a reputation as a painter of women, unequaled by any in the greater kingdoms of the eastern steppe. His work had been the ruin of many men, their free will and self-determination cast aside by hungry desire. His technique was simple. Use that most basic of male motivations, lust.

In the form of Countess Slovenia, he had found a canvas that flowered in his hands. Her beauty blossomed with every tender caress of his brush. A blood-red rose, breath-taking to behold in its delicate beauty, yet possessed of deadly thorns. She bore no physical defects or abnormalities on her soft white skin; So pure and radiant that when he worked on her it put him in mind of a fine porcelain doll. Sometimes his work on Slovenia left him breathless. A phantom ache of desire coursing through his manhood. It was a torture that few could understand and he had been sorely tempted to put aside his powders and paints for fear he might go insane.

Shafts of early morning light streamed through slits in the large tent that served as the command center for Slovenia's army. Slovenia herself stood at the far end of a large table strewn with maps and iron unit markers. She quietly observed the disposition of her captains as they entered the tent. Many of them wore the sullen expression of men bearing a heavy burden and a few of them were nervously avoiding eye contact.

When they had all found their seats, she turned and paced slowly around the table. Favoring them with a gentle caress across the shoulder as she spoke.

"Captains of the West." She said, her voice a soft, dusky lilt. "I know how you feel."

There was a grumbling murmur from the assembled men.

"Our situation is perilous. Make no mistake. However, news has reached me of a curious development in the plans of our enemy." She continued to pace around the men. Her perfume and beauty a heady mix that served to ease their qualms. Israel, observing from the shadows, was gratified to see the effect his work was having.

"It seems that the good Lord Jordan is more foolish than I previously thought. He has the advantage. Yet, instead of pushing ahead and driving his armies to crush us, as any self-respecting general would. He instead chooses to halt his advance and go hunting in the hearthland."

"My spies tell me that he left at dawn three days ago with some rangers and one of his sons. He was heading north towards the firewall." She completed her circuit of the seated men and stood proudly before them. All eyes were upon her.

"One of those rangers belongs to me."

She paused for a moment to gauge the reaction to this piece of news. It did not appear to be having the desired impact. One of the captains, a tall, burly Wreghan with a horrific axe wound scarring the side of his face, rose from his chair. He waited for her nod before speaking.

“Your highness, with respect, if you are suggesting that our hopes for turning the tide of this war rest on a single ranger out in the field, then we are beyond hope. What are his orders? How do you know that he is with Jordon? It seems to me that our situation is hardly improved by this news.”

There was a chorus of ‘ayes’ and banging of fists on the table. Men tend to be much braver when someone else has put their neck on the line.

Slovenia waited for the commotion to die down before replying.

“The ranger in question has been very well briefed, Captain,” she replied, keeping her tone measured. “He knows the stakes and is more than capable of doing what is required. Sometimes, a small stone when thrown from a cliff will start an avalanche.”

“That’s a wonderful metaphor, your Highness, but it’s a little trite,” the captain retorted.

“I have to sell it to soldiers that have seen entire platoons obliterated in front of them. Wiped out by a marauding army that outnumbers us by three to one. Do you think that they’re going to be inspired by that?”

There was a sharp intake of breath from the assembled men. Standing up to Slovenia was one thing, but he was treading dangerously close to insubordination; Something she famously had little tolerance for.

Slovenia glanced over at Israel. The eunuch gave an imperceptible shake of his head and Slovenia felt a palpable sense of relief wash over her. Her grasp on power was tenuous at best and she knew the value of making an example of someone who questioned her authority. But she could appreciate the Captain’s point of view and did not wish to punish him for his concern over his men. It was going to be difficult to explain how she could be so confident in the outcome of events that were taking place many miles away.

“Please take a seat Captain,” she said softly, gesturing to his chair. “I understand that the situation appears untenable, but please accept my assurance that there are far more pieces in play than just this ranger. You and your men will also play their part.”

The Captain knew better than to push his luck and quietly took his seat. All eyes were on Slovenia now. They had expected a strong reaction from her and the calm way she had defused the Captain's angst had taken them by surprise.

Israel scanned their faces intently. He had worried that her power to inflame the passions of men might not have been enough to bring them back from the brink of mutiny. He realized now that he need not have worried, he had forgotten just how persuasive a woman like Slovenia could be. Beauty was not her only asset. She was a born politician and was more than capable of handling herself under pressure. None of the men in this room had the wit to resist. Their faces would be comical if they weren't so pitiful.

Israel was far more important to Slovenia than anyone knew. In effect, he was her secret weapon and her shield. Aside from his skill as a painter of glamour, his true value to her and the broader Wreghan campaign was his strong empathy and mild telepathic abilities. Israel was not Wreghan. He was a Wanderer, native to the Hearthland. The region’s proximity to the Skyforge resulted in a high incidence of mutation that meant many children born to the Wanderers were horribly deformed, both physically and mentally. Most were cast aside as infants. Left as offerings to appease the wild beasts that fuelled the nightmares and legends of the tribe. Now and then a mutation would occur that was not immediately apparent and the child would be raised as normal until the deviance became obvious. This was usually evidenced by a particular mental retardation or deficiency. Then the hapless child would suffer the horror of abandonment by its parents and tribe, sold off as slave labor to the various courts of the Poan and Wreghan Kingdoms. Many suffered horribly at the hands of their new keepers. Few, if any, lived into adulthood.

Israel’s case was unique in that he was perfectly normal except for an uncanny prescience. He was brighter than average, personable, and adored by his parents. However, it was not long before his unusual talent was noticed. (*See Israel’s Exodus).

The superstitious tribe grew to fear and mistrust him, ultimately forcing his parents to sell him to Slovenia’s predecessor, a powerful Warlord who also happened to be the man that would eventually take Slovenia for his child bride (*See The Taming of the Slav). Fortunately for Israel, the Warlord had a touch of the empath himself and immediately recognized his gifts. He paid the eager slave trader his asking price. It was the single most important decision of his life. It saved the Wreghan Kingdom from annihilation but was ultimately the source of his own undoing. The Warlord treated the young child as a son, raising him as a member of his royal cohort, educating him in the arts of statehood and war-craft. Israel flourished and his unusual talents grew with him. He developed many skills, some more popular than others. The practical magic of the glamour quickly became his most popular art amongst the many fine ladies of the Wreghan courts. It was, however, his insight into the outcome of events that proved more valuable than he could ever have imagined. However, the problem with a powerful empath is that they invariably know things that put them at a considerable advantage. When Slovenia was married to the warlord, Israel sensed the potential within her. He foresaw her rise to power and chose a side.