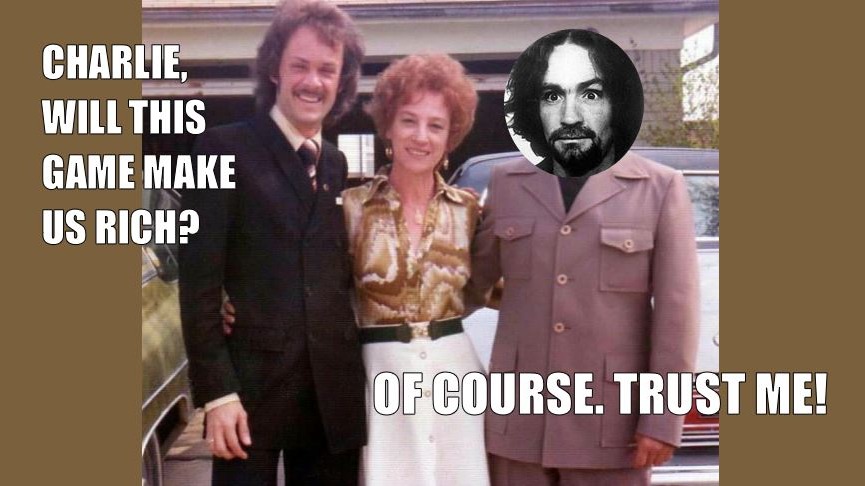 Other than the serial killers, who I only really included to show how flipping mental the 70s were, all of these examples involved people who fell under the spell of some deranged lunatics and seemingly gave up their powers of reason, self-control, and perhaps even their personalities and ability to make decisions.

One of the classic examples follows a similar pattern to the Patty Hearst story. In 1973, Jan-Erik Olsson started to rob the Sveriges Kreditbanken in Stockholm. He took hostages and demanded a list of ransom requests, including $700,000, a Ford Mustang getaway car, and the release from prison of an old buddy. He got all of that but the authorities refused to let him leave the bank with the hostages. This led to a multi-day standoff. Together in the bank vault for days on end, the robbers and their hostages formed a strange bond. By the end, the hostages pleaded to make sure the cops didn't shoot the robbers, and some of them expressed the desire to see their captors again, and wondered why they cared for them. This bizzarro mindflip of going from being threatened with murder and kidnapped for days to being your captor's #1 fan gained a very familiar name, Stockholm Syndrome.

I think I have been caught up in the crypto version of this. I call it Blockholm Syndrome.

There are a few telltale signs of Blockholm Syndrome, or BS for short (haha!). Look at yourself or at your loved ones and consider the following questions:

If you answered YES to any of these questions, you have Blockholm Syndrome. The good news is that you are not alone. The bad news is that there is no cure. As long as your crippled little fingers can click "Mine" you will suffer from BS.

One recent demonstration of BS has been the endless death wheeze of AlienWorlds. Like many BS sufferers, I click "Mine" and "Claim" and pretend I am playing a game. I waited for the long-announced ThunderDome gamey gameness to launch, and sighed patiently when the only announcements that actually happened were partnerships with Binance to create the snazzy new "Planet Binance," which also is not a game but we must pretend otherwise.

I click Mine and I run out of CPU, or I see that the system is down again, or I am told that I executed an "Invalid Hash", or in a miracle I actually mine something like 0.0065 TLM (which currently has a market value similar to your toenail clippings). And I complain. And then I go right back to clicking like a lobotomized pigeon.

Even more recently, the "game" Upland (about which more in my contest entry post) stalled a bit. It got quiet, and I got a bit bored of clicking "Claim" once per day and acting as if I was playing a game. So I was really excited when someone told me that you could finally build on your properties in San Francisco and Fresno. I have properties in both places, so I think I would look into it.

I fit the cheapest possible building on my tiny San Fran property, made it all pretty (well....exagerate much?), and clicked to stake my 0.35 Spark tokens to build it. Sure, it would literally take 113 days to build, but that is what this game is all about! Building a real estate empire, right? It takes a little time!

Or does it. Here is the result of multiple time-consuming attempts 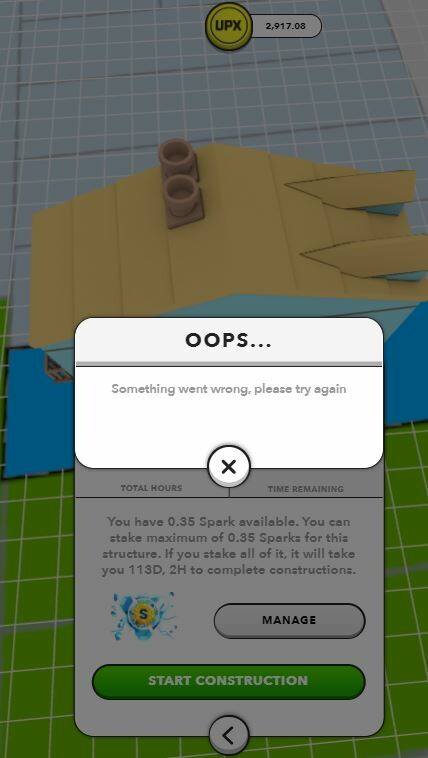 If this had happened in a normal game, I would be stunned! What? I jumped through all of your hoops and played by your rules and after waiting and waiting and waiting for literal months for you to launch the much-hyped feature, and it STILL DOESN'T WORK? I mean, how does a game company stay in business if their business as usual is kicking out games that are super boring to "play," have delay after delay in the main feature rollouts, and then simply stop working?

I'll tell you how. They create a blockchain game instead of a normal game. They tell us our NFTs will be worth money, that we can trade the game tokens for BTC someday, that millions of new players will join and buy our crap any day now, and that a playable game that has more to it than clicking "Mine" or "Claim" is just around the corner. These are undoubtedly complex games to design and especially to scale up. Scaling up seems to be a consistent challenge for most blockchains. But come on, if these were "blockchain games" and if there wasn't hype around whales throwing $20,000 at these games to buy land or famous properties or what have you, would we play most of them?

There are exceptions of course. People claim they would play Splinterlands or Gods Unchained even if they didn't have a bug Pay Day in their eyes, and yes, those games have playable assets, turns, winners, losers, and all the little bits of real games you would expect.

We are waiting for our payday, which makes these games more financial speculation than games per se. But it is really hard to evaluate the "walk away point" for a game that you sort of play for free, isn't it? If you buy stock or crypto and it fails to perform, you sell and move on. But what if the free game you have invested hours and days in doesn't ever seem to get to where it promised to go? How do you know when is enough?

That is a trick question! Because I have Blockholm Syndrome the answer is NEVER! It is never enough and the game will always be good to me and yum, this is great Kool-Aid!

So I keep going back. I still click, I still check to see what new properties are available. I still try to build a tiny townhouse even after hitting the "Ooops" error multiple times. I am still in the "game" even when there is no game to play.

But when ThunderDome comes, it will be SOOOOOO AWESOMMMMMMMEEEE!!!!

If you would like to contribute to the for-sure-not-a-thing-I-just-made-up-to-be-funny Society for Losing Our Blockholm Syndrome (SLOBS), you can do so by checking out my other posts or consider using my referral links below to join the cryptomadness. And no, it is not ironic that I am recommending a couple of blockchain games. Can I explain why you should play them? Ummmm... heh heh!

Or play the famous real estate empire building game that is currently driving me mad, Upland! If you use this link, Upland will award you with a bonus for your first purchase https://r.upland.me/w2UW