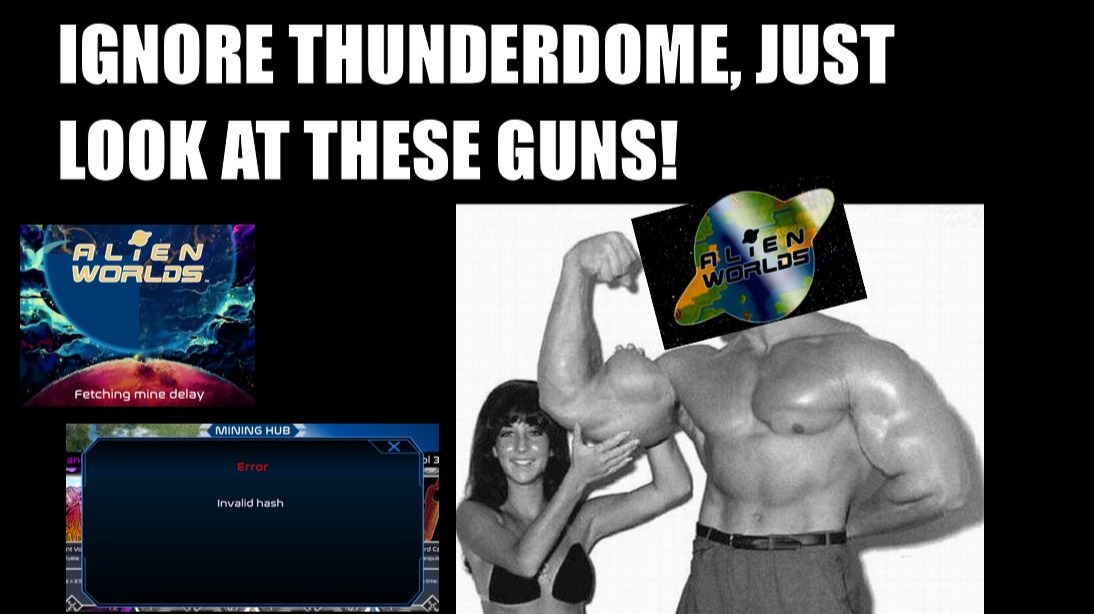 Last week, I posted on noise.cash that I had managed to mine AlienWorlds successfully 6 times in a row!

No one believed me and that brief moment of celebration melted into time, like an M&M dropped onto the airplane seat next to you...

Oh Alien Worlds, you were the 2nd game I ever started playing on blockchain (I think Gods Unchained beat you), and you have fallen on hard times, my friend. Hard times.

Using your interface always was a pain in the alien. It had cool space music and a cool furry-looking planet (why furry?????), and a cool retro Commodore PET era space game interface, but why so much missing functionality? Yes, the clunky stinky site you built did spawn a creative burst of backend and 3rd party solutions, so in that way you increased the agility of the crypto economy. But still. Other than promising Thunderdome forEVER, almost every other option does a better job. Can that be a good thing?

But this is NOT another one of the many kick Alien Worlds around posts that have turned Alien Worlds into the Justin Bieber of crypto (except AW never spit on his presumably deaf fans).

No, this is a sincere and heartfelt thanks to this insane platform for the one thing it did better than any other platform I have been involved in.

I remember trading 1000 TLM for 0.2 WAX or something like that back in the day. I had traded up to some mediocre tools and was stacking TLM on TLM. I even staked some to a planet hoping to get NFTs. I was jealous of people who had all that land, but they were making 1/10000th of a WAX per TLM just like me, so more power to them!

It was then that Alien Worlds executed the greatest ever gift to shrimpy little blockchain players like me. They created to portal to get TLM out of the game, out of Alcor, almost anywhere you wanted it. OK, that is not true, it was only to MetaMask or whatever. But you see the point right? As all these platforms announce listings on exchanges here there and everywhere while your tokens are locked on the site falling, falling, falling in price, you see how really great that 1 Shining Moment was from Alien Worlds, right?

They gave us control over moving our ingame tokens BEFORE they were listed!!!

This meant that we could trade right away if we wanted to.

Also, they gave us plenty of warning that the Binance listing and the crazy FOMO was going to happen, giving us *almost* enough time to prepare (unstaking from planets took a little too long for me to hit the exact peak TLM price).

You add these two things up - 1. I can do what I want with my TLM, 2. I know when the boom will be - and it gave us the opportunity to soar along with them!

I am STILL moving weird BSC tokens around that I seeded with my one little burst of glory from when TLM Mooooooooonnnnnnnnedddd! In fact, I was just celebrating the fact that I got a little nugget of a different game's prized token (Splinterland's SPS) by staking CAKE *which I bought with TLM money!*

But it does not matter to my little wallet. They launched their ingame token into the real big world better than any other project I have been a part of and I am very, very grateful that of all the things they could get right, that was what they picked!

Believe it or not, there ARE games out that there are even more engaging than Alien Worlds:

Jump aboard the runaway Splinterlands train while there is still an airdrop of the SPS governance token and a new set of packs dropping in the very, very near future. Not Free 2 Play, but even a shrimp like me can earn by my investment and more using the many resources, communities, and guides out there: https://splinterlands.com?ref=pregosauce

Play a FREE 2 PLAY NFT game that doesn't destroy you in transaction fees! And, build your presence in the HIVE community while you do it, with Rising Star: https://www.risingstargame.com?referrer=pregosauce

(parts of this post were modified from my work on other blogging sites, but all writing is original and mine)