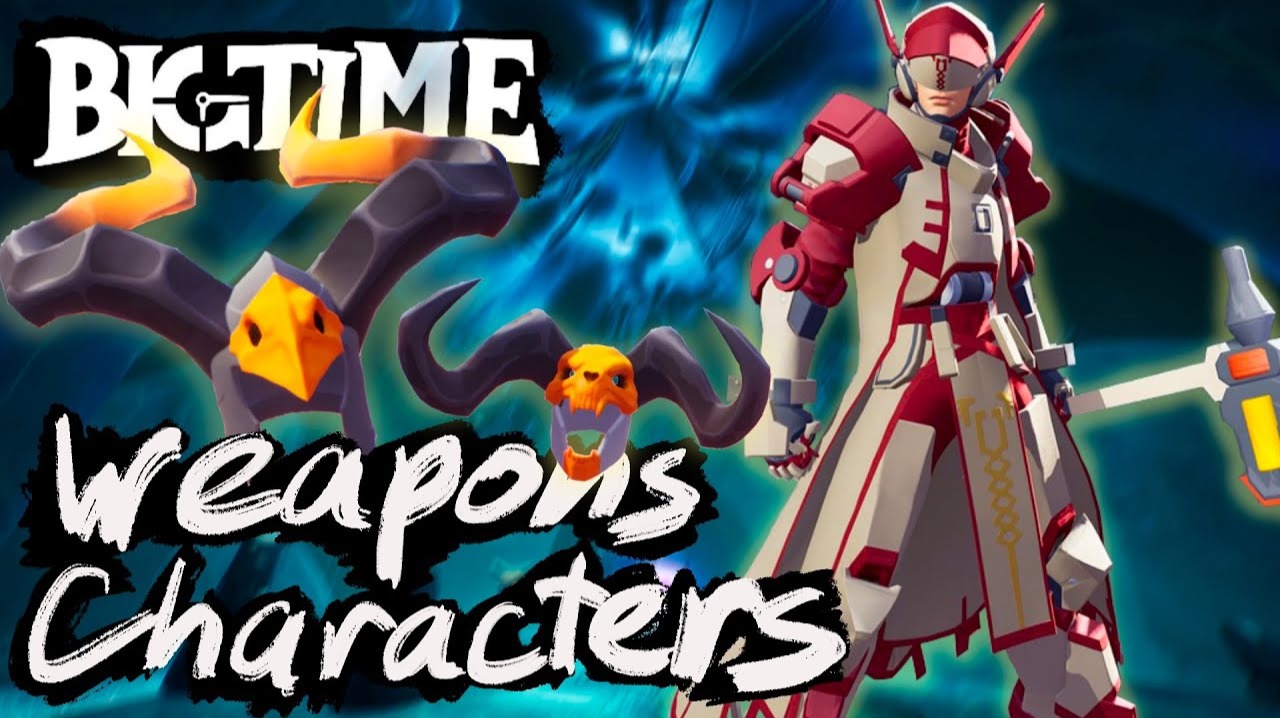 Welcome back to another Big Time blog, we’ve just finished talking about the Big Time’s story, Space NFTs, and the future Token.

It’s about time that we talk about the details of Big Time’s 4 Character Classes, the weapons, and armor tiers.

If you haven’t watched the last video yet, be sure to check it out first, since in order to understand the characters better, you need to have a good grasp about the story and lore of Big Time’s Universe!

And here we go, ladies and gents! Time to go Big Time!

The Time Warrior is probably going to be the gold standard of all classes. They are the most basic, but that also comes with the fact that they are proven time and time again to be efficient in battle.

They are the ones who mows through their enemies with aggression and brute force.

Basically everything that you’d expect from Warrior Classes -tanky and strong with high HP, Strength, and Physical Defense.

Big Time’s storywriters has put these guys into a very well thought situation.

All thorugh-out history, no group of people has ever been so misunderstood by the masses.

Whatever science and technology that’s too advanced for people to understand, they call it magic.

And these Chronomancers aren’t any different. In the simplest sense, they are the most advanced spell casters, witches, doctors, technopriests, and mage warrior heroes.

Shadowblade… like I said in the previous blog, a shadowblade is like a very cool speedy ninja assassin rogue… expert.

They have been called nimble rogues and are described as part ninja and part hacker, or thief

-hence they are clearly the assassin types of fighters that don’t have particularly high HP and DPS, but surely are very effective when it comes to high speed and high evasion, and landing chains of attacks with critical hits.

When forming a team, they are a must have. Why? If ever your party is in a pinch because turrets have pinned down your party, or because deadly traps are triggered by your teammates during a raid, the Shadowblade can slip in quickly to disarm them.

Quantum Fixers are the 4th and last class member of the 4. And they stand as the party’s Support Class.

They are called “Evermore’s Secret Weapon in the battle for history.”

Be warned to never underestimate how important Fixers are. They are literally present to fix all problems, since muscle strength, magic power, and stealth can only get you so far.
On some point, our Time Warriors, Shadowblades, and Chronomancers are gonna reach their limits in a fight -and this is where Quantum Fixers shine in battle. Interesting ain’t it?

I guess you can call them the unpredictable genius strategists and battle analysts.

They are the likes of scientists, doctors, engineers, inventors, tinkerers, and the brightest minds from every corner of time and space.

They embody a wide range of disciplines, from cutting-edge technology to arcane knowledge.

I think the writers of Big Time were really enjoying their Quantum Fixers so much
I still don’t think they’re overselling them though, since just by the descriptions alone, I can see a lot of potential with the idea how Quantum Fixers can be useful as versatile tacticians in battles, turning the tide of the fight and ultimately controlling wins.

The writers compares them to scientists and researchers such as Stephen Hawking, Hippocrates, and Marie Curie.

And ultimately, to one of the world’s greatest minds: Leonardo Da Vinci.

Using advanced tech as support… or Tech Support (TOINKS), they serve as field medics and gadgeteers, the provide buffs for allies.

They have a wide array of skill sets for both offense and defense which works with the coordination of the team.

If you’re interested in doing Big Brain Plays, then Quantum Fixers are probably the way to go!

Now let’s talk about the game’s initial lineup of weapons which they call: Alien Weapons of Destruction

Yep, the weapons we’ll be using are of alien tech origin.

Now let’s take a look at their starting arsenal. First, we have

It’s a relic of a long-forgotten war which specializes in single melee combat. Its razor-sharp edge is ideal for whittling down an individual target. This one’s obviously for our Time Warriors. Based on the stats graph, we can see that this weapon is gonna be our most balanced of all 6. Pretty much average in speed, combo, and all the other stats, with a little more damage and blocking ability for a little trade off of range.

An extremely fast weapon that’s most ideal for players who love to flank behind enemy lines. These could be a pair of short blades, or perhaps dual axes that are light enough to allow the bearer to dance their way across the battlefield, delivering a rapid series of combos against enemies.

And I think it’s pretty much already given, these are the most ideal weapons for our shadowblades. These dual blades offer little to no blocking ability, and even less damage and range than the battle axe, but the very high speed and combo more than makes up for it. And I’m sure it’s gonna be a lot of fun to use!

The Big Daddy. If it takes two hands to wield this sword, then it’s definitely the heaviest and slowest of the bunch. Not that it’s actually slow! It’s just not as fast as the others hehe. The writers don’t want to call it “slow” so I won’t LMAO. They said, “Who would have built something so massive yet so light and nimble?”

Must be true since it’s alien tech -and if an ordinary man like me can wield it then it really has to be a lot lighter than it looks! The two-handed greatsword can be swung in a large arc, cleaving a path through enemies and parting the sea for spell slingers and ranged attackers alike.

Decent Blocking, Good Range, and Very High Damage. I have a lot of experience using these kinds of weapons in games, it may not be as flashy as the combos ninjas do, but whoever has been using these can definitely assure you that EACH BLOW YOU HIT IS A GUARANTEED SATISFACTION

This, ladies & gentlemen, is a classic pair. Tried and true, the sword and shield combo provides a decent offense and excellent defense! The one handed sabre is a well-balanced blade that’s decently powerful and quite fast enough for multiple combos.

No other arms can be better than a shield for blocking, although this form factor is a bit short in range since you need to get close to your enemies always. This one is a favorite of many, since it involves strategic use of blocking and striking with proper timing. Another good one for the Time Warrior eh?

Let’s give some love to our Chronomancers this time, actually, this is a lot of Love to begin with. The Quantum Staff is an ancient artifact which radiates immense temporal energy from the arcane power it wields.

It’s speed and combo is equal to the Time Warrior’s War Hammer, but Its length provides an even better blocking ability and this weapon can attack by casting spells from long range.

Yours truly, the Time Warrior having a Viking aesthetic, this particular one would definitely feel like THOR putting the Hammer down making powerful slams that allows us to push away even our bigger foes. It’s like the middle ground of the the Battle Axe and the Two-handed Greatsword, but not exactly.

The hammer is slightly slower and a little less useful in blocking compared to the axe, but the range is way better and it can damage more foes in each blow.

So let’s take a look at that… Each armor in the game always has 2 main components: Functionality & Cosmetics

These are handled independently because Big Time is NOT going to be a “pay-to-win” game.

Big Time GG is going to take skills and teamwork from players in order to actually progress and win further.

So it takes crucial decision making on choosing which armors to wear before battling.

And come on, how can we forget the fact that we just love when there are a lot of aesthetic options to choose from.

Who doesn’t love having a huge wardrobe with lots of fancy designed armors?

And I know I’m not alone on that one.

So there you have it for today’s blog!

Stay tuned for more content about Big Time and other blockchain games in this site.

Next time, we will also talk more about the enemies, factions, and adventures that can be found in the game.