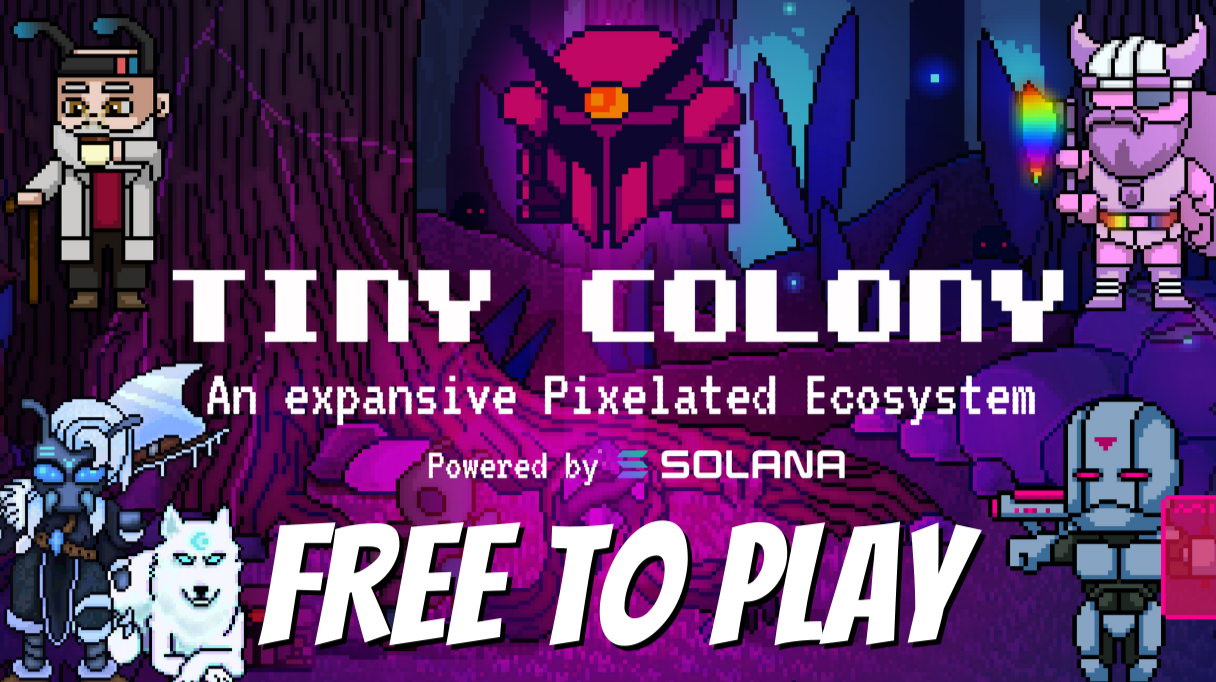 Tiny Colony is a play-to-earn gaming metaverse where players can earn tokens and NFTs through skilled gameplay and contributing to the Tiny Colony ecosystem, AKA the Tinyverse.

The Tiny Colony universe or Tinyverse is a fictional world of pixelated,  highly intelligent ants, containing a rich history dating back a thousand years.

Here players can build their underground colony, assemble their army, trade in the in-game marketplace and participate in engaging games and activities in the pixelated ecosystem.

Tiny Colony is integrated within the Solana Blockchain, the same as the games we featured here before like SolChicks, Seoul Stars, and Wizardia.

With numerous game modes within the Tiny Colony game, the importance of a fast, reliable, and affordable blockchain integration is paramount.

The Tiny Colony Base Game allows players to start building a colony without requiring any NFTs.

Beyond that, a plethora of NFTs is available for players who want to maximize their experience and participate in community events.

In the Tiny Colony Metaverse, players can build and grow advanced Humanoid Ant Colonies,  defend their bases against dark forces that roam the underground, challenge other colonies to battles, form alliances, and trade with one another to participate in large scale community events.

Here are various game modes that will be available:

Gladiator Arena (PvP) — Wager TeenyBits and NFTs! Pit your strongest Character NFT against another player’s NFT in the battle to win loot, experience points, and large amounts of TeenyBits. This game mode is limited to Legendary or Mythic Characters only. Spectators can watch these battles and bet TeenyBits on their favorite Character NFT in the Gladiator Wars Events!

Battle Arena (PvP and PvE) — Gather a squad of up to 5 of your Character NFTs and fight to clear wave after wave of dark creatures to win larger and larger amounts of loot and TeenyBits! Or, go squad-versus-squad against other players.

Tiny Wars (PvP and PvE) — Join forces with other players in a community-wide event. This is total Tiny Warfare and offers the largest share of rewards among Tiny Colony Events.

Tiny Slots –  It’s not all building and fighting, though; with Tiny Slots, users can play minigames for a chance to earn more TeenyBits (or perhaps a rare NFT).

And lastly, their unique Tiny Theater. Here users can pay a small fee in TeenyBits to watch animated short films set in the Tinyverse.

As per the team, players can look forward to many more events and experiences to come. Over time, the Tiny Colony metaverse will expand to a full open-world survival MMORPG and beyond.

For those unfamiliar, Fractal is an open marketplace for gaming NFTs.  Blockchain gaming companies are able to list NFT drops for durable in-game assets and safely sell directly to players.

Players are able to discover new NFT games, buy NFTs and resell their NFTs.  The Fractal team consists of an all-star cast of serial entrepreneurs, including Justin Kan  (co-founder of Twitch), David Wurtz (co-founder of Google Drive), and Robin Chan (founder of XPD Media, acquired by Zynga), and Mike Angell (previously with Fast and Shopify).

These virtual land NFTs upon game launch will allow the users to build colonies,  earn royalties, rent their land for use, and many other income-earning potentials.

Also, Holders of Colony NFTs will be given voting and decision-making rights pertaining to certain Tiny Colony development and protocols.

Prior to the game launch, Colony holders have an incredible number of benefits,  perks, and access to all things Tiny Colony.

The more colonies that a user holds, the more pets they will receive. The higher the tier colony they hold, the higher rarity of pets airdropped to them.

Again, Tiny Colony is a free-to-play game.  A user does not have to purchase a Colony or Character NFT to enjoy certain aspects of the game.

However, to fully engage in the rich story and lore, play multiple game modes, and be rewarded in the numerous play and earn models, the team encourages to hold and integrate an NFT.

Character NFTs play a major role in the Tinyverse. They are unique to the various factions and offer different functionality and gameplay. Each character is developed with distinguishable abilities that range from fighting styles,  weapon choices, upgradability, and many others.

The characters are faction-specific that are derived from the rich story and lore. These characters include The Samurai, The Persian Army, Vikings, Spirits, Sorcerers, Nobles, and much more.

And coming off their highly successful Colony mint that took place on Fractal Marketplace, they have announced the upcoming tiny Colony Character NFTs sale happening on April 28, 2022.

Users will be able to choose the Character NFT based on one of the nine Factions.  The mint will produce a randomized Character of different rarity.  Each character can have various assets that allow for Game and Market Rarity.

So if you are intested to get one, make sure to click the link provided below to join their character NFT Whitelist.

$TINY (or TinyBits) is Tiny Colony’s native token and it has already been launched last year.

Players can use TinyBits to buy, sell or trade Tiny Colony NFTs at the marketplace (“Bazaar”), including characters, weapons, cells, quests, theme packs, cosmetic items, and much more.

Effectively, TinyBits act as the portal between the Solana blockchain and the Tinyverse.

On the other hand, $TEENY (a.k.a. TeenyBits) is the in-game currency token for Tiny Colony and is earned by simply playing the game!

TeenyBits can be earned by engaging in a variety of activities, starting with the construction and management of your ant colony.

As you build and grow your colony, you will be able to use TeenyBits earned from gameplay to take on quests posted at the Mission Center. In addition to using TeenyBits to meet mission requirements, you can spend TeenyBits repairing your base and upgrading NFTs purchased at the Bazaar.

Tiny Colony’s team is FULLY doxxed, has completed an AMA as well and  is featured on Binance Live. They’ve expanded to over 40 members, including 18 dedicated employees from iLogos.

Tiny Colony has established a partnership with iLogos.  With over 400 games developed including Angry Birds and Simpsons: Tapped Out,. iLogos is the ideal Partner to bring Tiny Colony to life.

A world-class game studio with clients that include Disney, Rovio, Ubisoft, EA, Warner Bros., and many more.

The entire Tiny Colony team is passionately dedicated to the project and provides extensive experience in development, blockchain, and design that will allow long-term success.

More information about the team can be found on their discord server along with links to their Twitter, linked in and other personal social media accounts.

As I’ve mentioned, their TINY BIT token Presale happened last year, followed by the Colony Sale early this year. Something to look forward to is the character NFT sale happening this April.

The roadmap for the rest of 2022 through early 2023 will be characterized by quarterly releases of new in-game battle functionality.

Early Access for the game will be released in Q2.  In late 2022, players can form alliances, make clans and participate in Tiny Wars to collect some of the largest rewards offered in the Tinyverse.

IS IT WORTH IT?

Tiny Colony is an all-encompassing Metaverse with limitless opportunity for expansion. Through multiple game modes and enormous play-to-earn opportunities, they said they plan to compete against Axie and Sandbox.

And what I personally love about Tiny Colony is how solid its team and partnerships are.

The team is backed by Ilogos, Titmouse Animation Studios, StarLaunch IDO platform, and several other major investors. Their team is public and very active in their social community.

So I can say it’s definitely worth a try, after all, it’s FREE TO PLAY.

Accessibility is a major priority and will allow anyone to play Tiny Colony, through a web browser, without the purchase of an NFT.

Tiny Colony’s number 1 priority is to create value for its holders – besides developing an incredibly fun and profitable game.

As the Tinyverse grows, the community can expect the utilities for both TeenyBits and TinyBits to grow along with it, ultimately leading to continually improving gameplay, a vibrant economy, and long-term sustainability of the Tiny Colony platform. And I’m definitely looking forward to it.