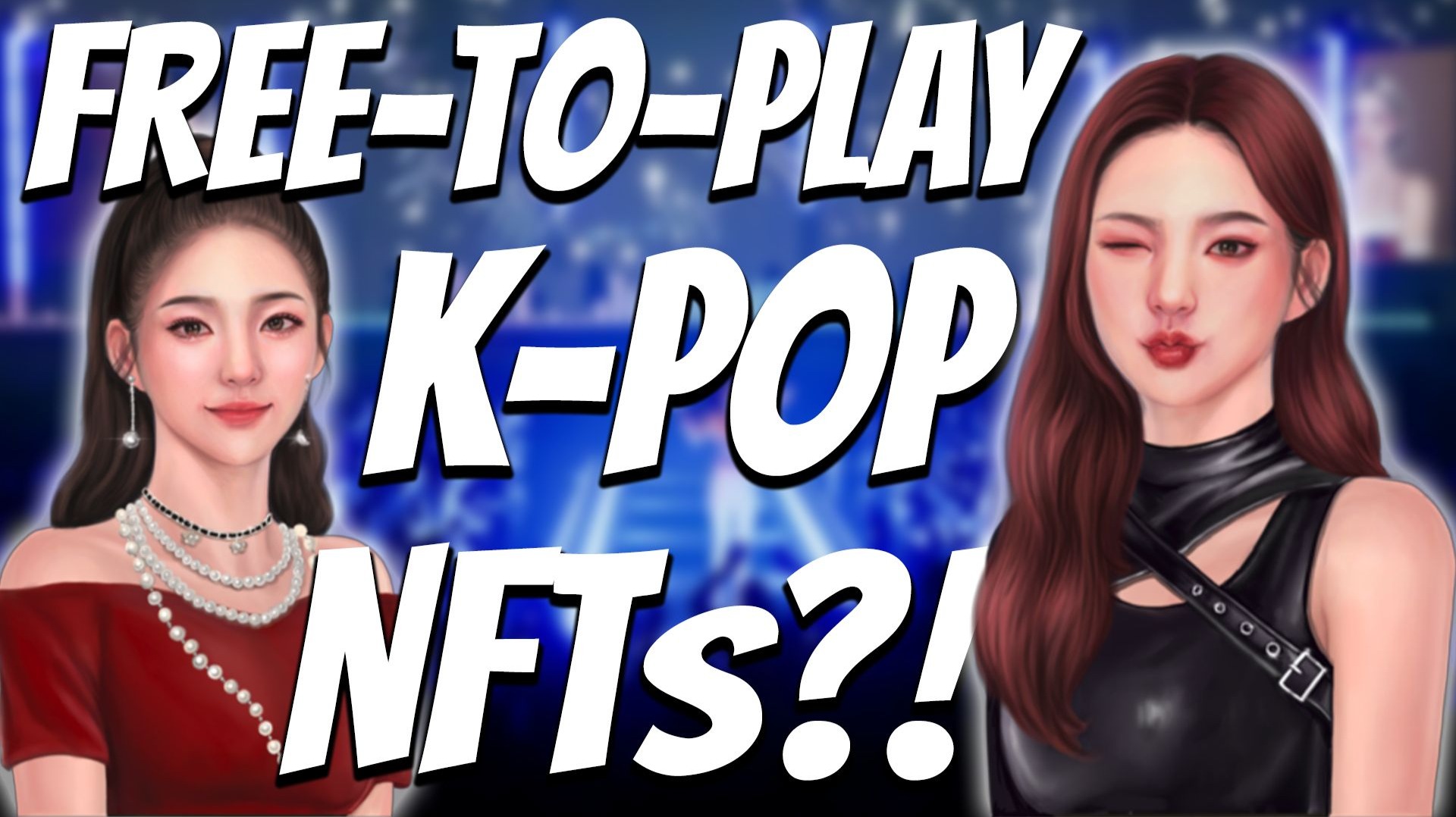 Anyeonghaseyo! Calling out all our K-Pop Fans!

If you’ve been following the channel for a while now, then you know I also played as Blackpink’s Lisa in another game.

Dead giveaway that I’m a blink? Haha! Who knows?

Well, what are we waiting for?

Wouldn’t wanna waste time on this intro so let’s just get on with it and we have a hell lotta things to talk about this new blockchain game called Seoul Stars.

Seoul Stars is a new blockchain project which is created by people whose vision is to create the very first virtual K-Pop idol, named Yuna,

And build her on the blockchain with an abundant collection of content in the form of songs, albums, virtual concerts, and games.

They are doing their best to make the vision come to life soon, so we can all see Yuna eventually become a relaistic 3D virtual idol who gets to be featured in real-life mainstream media and the metaverse as well.

They have the famous music producer Tommy Lee making music with them, and they even have plenty of endorsements with real-life K-Pop Celebrities.

The Korean K-pop agency, HUMAP Contents, will be the leader for the production of their realistic 3D virtual idols.

And Yuna, their very first virtual idol, is already making albums and will soon host virtual concerts across the world in the metaverse.

Seoul Stars is creating their game with Catheon Gaming as their advisor. And in case you haven’t heard of them, Catheon Gaming is the one responsible for the success of SolChicks.

And we all know how well that went just last month.

Just don’t interchange the names of Seoul Chicks with SolStars, ok? Those chicks are definitely not from Seoul Korea.

And perhaps, this has always been what both NFTs and K-Pop are all about: to breathtakingly capture the whole world’s attention.

Hehe… Do you agree with me? Anyhow…

Now let’s talk about the important part: The Play-to-Earn game itself.

They actually call it as both DJ-to-earn and Sing-to-earn games.

It’s basically just like karaoke with scoring and Dance Dance Revolution, Guitar Hero, or O2 Jam but with the utilization of NFTs.

Oh and another good news, there are many opportunities to get yourself an NFT for playing the game, but they are not required for anyone to start getting their hands on the game.

Yep! It is Free-to-play! Daebak!

The best players with the most consistent and highest scores from the 2 different games will be able to earn ranking points and be classified into different ranking tiers.

These leaderboard rankings reset every 1-2 weeks.

And what’s the reward you may be asking? It’s crypto named SSTAR Tokens. More on that later.

For the Rhythm Game, we have 2 game modes: Single Player and PvP

For Single Player, each song gets its own leaderboard, and only the top ranked players gets SSTAR Tokens.

As for the songs, we can expect that some will be easier or harder than the others, and obviously the most popular songs will get to be played a lot more by players, so competition is expected to be tighter.

Scoring system is based on accuracy of hitting the beat in either perfect, great, or good timing.

Obviously “missing” a beat amounts to zero points, or maybe even negative points, which can make things even more difficult.

I believe everything here is familiar, since most of us has already played Dance Dance Revo way back in the 90s hehe.

The second mode is the PvP Mode. It’s practically similar in mechanics and scoring, but the only catch is that it’s going to be a live matchup between 2 closely ranked players.

And the only goal is to score more points than your opponent. You either rank up or down depending on who wins.

Winners get better chances in winning more Yuna Coins and Casting Tickets which are important in the game. More about them later.

Next, is the Karaoke Game. And it’s pretty much self-explanatory.

Scoring is based on pitch, rhythm, and tone accuracy as players… or rather, singers, perform and sing along Yuna’s instrumentals.

There will be solo mode, duet mode, and even competition mode.

I guess we’ll see with our own eyes and we’ll definitely know what to do once the 2 games are out.

How to Earn (Tokenomics)

The game currently works with 3 currencies. The first one is the main cryptocurrency, called $SSTAR Tokens.

SSTAR Tokens will serve as the game’s Governance token that provides governance rights to holders.

The way to earn them is through making it on the weekly leaderboard rankings.

The second is the Casting Ticket which can also be earned through gameplay.

Third, we have the YunaCoin -which is the game’s in-game currency.

Yuna Coins is used for purchasing in-game items. Some of which are autograph items from Yuna and other real K-Pop idols.

And these autographs can be equipped to boost the player’s rate of earning in the game.

For every profit generated by the virtual artist Yuna, 30% will go directly to the community wallet.

These would come from Yuna’s ads, concerts, albums, and merch!

And from the collective funds, 80% of the whole community wallet will be used for buying and burning SSTAR Tokens.

And the remaining 20% is for giveaway events to the NFT holders in the form of tickets, metaverse goods, merch, physical albums, and webtoon hard copies.

Mark your calendars because the first ever IDO for SSTAR tokens will happen sometime in February 2022.

The game is Free-to-Play, yes, but owning an NFT to play the game surely brings significant benefits.

Firstly, NFT holders gets a much higher rate of earing when playing -and the more valuable and rare your NFT, the higher the rate improves even more.

And secondly, NFTs contain certain skills and abilities that players can use in-game to get some edge.

These are going to be the 7 Skill Sockets that’s based on Yuna NFT Attributes.

Each player has a total of 10 fillable sockets for equipping.

7 slots are for the skills that we get from Yuna NFTs, and 3 slots for in-game items.

We don’t have info about these in-game items for now, so stay tuned and subscribe to the channel to keep yourself posted for future news and updates.

But for the NFTs, we do have a good amount of knowledge about them.

Each Yuna NFT gets 12 unique traits based on clothing, facial expression, hairstyle, accessories, and other things.

And the skills and rarities are based on these traits.

These are all the potential skills that your Yuna NFTs can have depending on their value and rarity.

Seoul Stars have actually had 2 NFT sale events. 1st Gen NFTs were minted in less than 20 minutes way back in November when it just released.

2nd Gen Yuna NFTs were minted just 2 days ago on January 19. I imagine it sold out just as quickly.

Soon to be announced is the 3rd Generation Yuna NFTs -the official release date soon to be determined.

And here’s a summary of the other benefits holders get.

One particular benefit that I want to emphasize is that holder of Yuna NFTs will automatically get whitelist privileges for the $SSTAR token IDO that’s coming next month.

This also means that holders can get the benefit from the 30% profit generated by the virtual idol indirectly through the system.

If you want to get your hands on some Yuna NFTs, you can either wait for the 3rd Gen sale event, or you can just go to magiceden.io/marketplace/seoul_stars right now and purchase some Gen 1s and Gen 2s that are for sale.

According to the roadmap, we’ve got more things coming next month aside from the release of SSTAR Tokens.

We also have Yuna’s 3rd song and her showcase in other metaverse platforms,

So we all better keep our eyes pealed for that!

If you want even more details and info about Seoul Stars, you can check their official website and whitepaper in seoulstars.io

Here you can learn more about the Ranking and Tier System, Debut Cards, and more, including the Character Decoration System which seems to have a lot of in-game in-depth elements.

And another notable thing…

Produce-Song-to-Earn is mainly a very new thing for now. And in my knowledge, it’s the very first time the Blockchain Industry has gotten this.

If you happen to be a songwriter and a composer and a music producer as well, then you get a chance to actually get your songs into Seoul Stars Game and you can earn Token Royalties from them depending on their popularity.

Pretty good opportunity don’t you think? Maybe I should change my career into a K-Pop Star, too!

So what do you think about Seoul Stars? Are you huge of both K-Pop and NFTs?