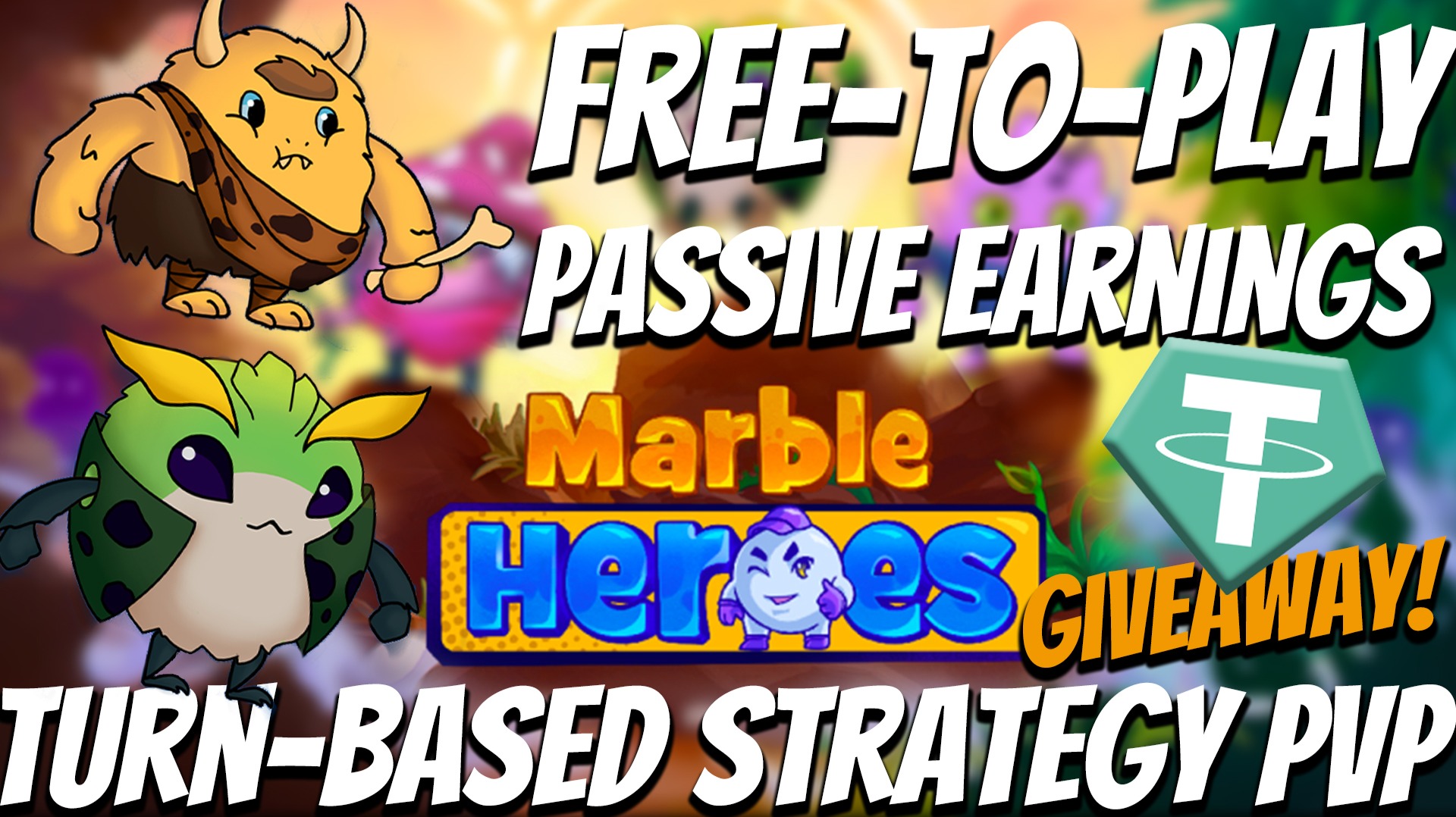 It’s already almost a year since the hype of NFT games has started to become very bullish. And Axie Infinity is the very game itself that carried the whole Play2Earn Industry back in June 2021.

This was around the time when NFT games, in general, were still very unpopular and very quickly rose into popularity -with Axie setting the high standards. And there’s been so many Play2Earn games that started to get developed since then.

And one of which is the very upcoming game we are going to talk about today. It’s a totally different game in so many aspects. But, let’s take a look at just how differently made is Marble Heroes.

Marble Heroes is a new upcoming Free-to-Play Play-2-Earn Game that capitalizes on many key revenue drivers.

Such drivers are NFT sales (including equipment, and the heroes themselves, and some other in-game assets), in-game transaction fees with MBH Tokens, and other extra revenue including things like advertisements and premium player subscriptions & services.

We can all expect that the gameplay of Marble Heroes is going to be very familiar to Axie Infinity players since it is quite obviously modeled after it.

And as you can see here, these are a few examples of cards that you could use to win battles in the game. And it’s not just the cards, but the very characters as well.

Now let’s take a look at this. They have even prepared a table for us so we can see just how differently Marble Heroes is played in comparison to Axie Infinity.

So in summary, there are major differences between combat strategies and how the NFTs are utilized.

The PvE and PvP Battles will be action-packed and will involve a unique counter mechanic which will add more strategic depth.

Especially since the game will feature deep levels of skill customization.

Their character NFTs are already available in their own marketplace. You can buy them with Tether or USDT using the Binance Smart Chain Network.

These Marble Heroes are divided into 3 groups:

First, we have Humanoid Supernatural Creatures, and these include earthlings, aliens, and robots.

And Third is the Classification of Orcs, and these are the beasts, the undead, and the insects.

Each character has a core body -which determines the group it belongs to and will consist of other parts such as arms, hands, legs, hair, eyes, mouth, and other things.

While the body determines the NFT’s core group, it’s these other parts that make each and every Marble Hero NFT Character unique.

Some or maybe each of these parts provides different values of attributes for the character, too -like for Defense, Attack, Speed, and Magic.

And once these body parts and their corresponding attributes have gotten their vitality, they will then have the following basic functions and indicators.

And here’s how it works, each character is born (or minted) with four cards, corresponding to the four parts of the body which are the hand for the attack, the leg for the speed, the body for defense, and wisdom (or perhaps the hair) for spell power (or simply Magic stats).

Then after each body part is spawned, it will be assigned with specific values of health, speed, skills, and moral evaluation.

But you may be asking, what is the relevance of the three classified groups? Well, they are basically like Rock Paper Scissors.

And according to them, Roles play a key part in their Game Design. Marble heroes are actually divided into three races, and in each race, there are three different types of heroes.

The 3 races are Terran, Spirit, and Warcraft.

-The Terran race is known for being creative and intelligent but isn’t very physically potent.  And the 3 types under Terran are Earthlings, Aliens, and Artificial Humans.

-The race of the Spirits is known for its mysterious magical skills of transforming natural energy. Under Spirits, we have the: Plants, Animals, and Elements.

And finally, the Warcraft Race. These abominations are the result of evil magic that mutated from the elves. Magic has excessively strengthened their physical abilities.

Their 3 types are The Orcs, the Undead, and Zergs.

This provides a very clear advantage because the restrainer always causes additional 30% damage to the restrained enemy.  And in the same way, different types of heroes also have corresponding restraint relationships, but instead of 30% additional damage, it’s just 15%.

Hero rarity is also very important. The rarer the hero’s rarity, the higher is the growth potential. But this also comes at a larger cost, since the accessories are more difficult to obtain for heroes that are rarer.

It’s easier to make common heroes stronger, especially at the start, but the ceiling is very low.

Attributes also play a key role in determining the value of each Marble Hero and just how useful they are in battle and in forming teams.

Here’s a long list of what attributes and functions are already documented for the game:

CryptoMarble Project claims that there are many ways you can earn Marble Heroes Coins by playing Marble Heroes.

Like earning from NFT sales (including equipment, and the heroes themselves, and some other in-game assets), in-game transaction fees with MBH Tokens, and other extra revenue including things like advertisements and premium player subscriptions & services.

As of now, they have 2 tokens that are going to be in circulation: CLS Tokens and MBH Tokens. And all of this is going to be in their own Metaverse soon.

Marble Heroes is currently doing a $50 giveaway event on Gleam! And it just started less than a day ago.

All you have to do is just subscribe to Monster Heroes’ Social Pages. Hey! This could be the easiest $50 of my life haha!

Here’s the fully doxed developer team of Marble Heroes and their roadmap.

Currently, we’re still here in Version 1, which is the origin. No playable game yet, but the trading market is already open and accessible.

The next one that’s coming is Version 2 which will bring us forging. To simplify the long explanation, forging is basically just like staking NFTs for profit. There will be different levels of grades with different levels of rewards. And of course, bigger investments, bigger potential earnings.

Then later, Version 3 will bring us PvE and PvP Battles Modes. Finally!

V4 will be for balance and V5 for the Great Home update.

There’s a detailed explanation about more things in Marble Heroes, and you can check them out yourself by visiting their website and reading their whitepaper.

So what do you think about Marble Heroes? Do you think they have what it takes to be better than Axie or maybe even become the next trendsetter?