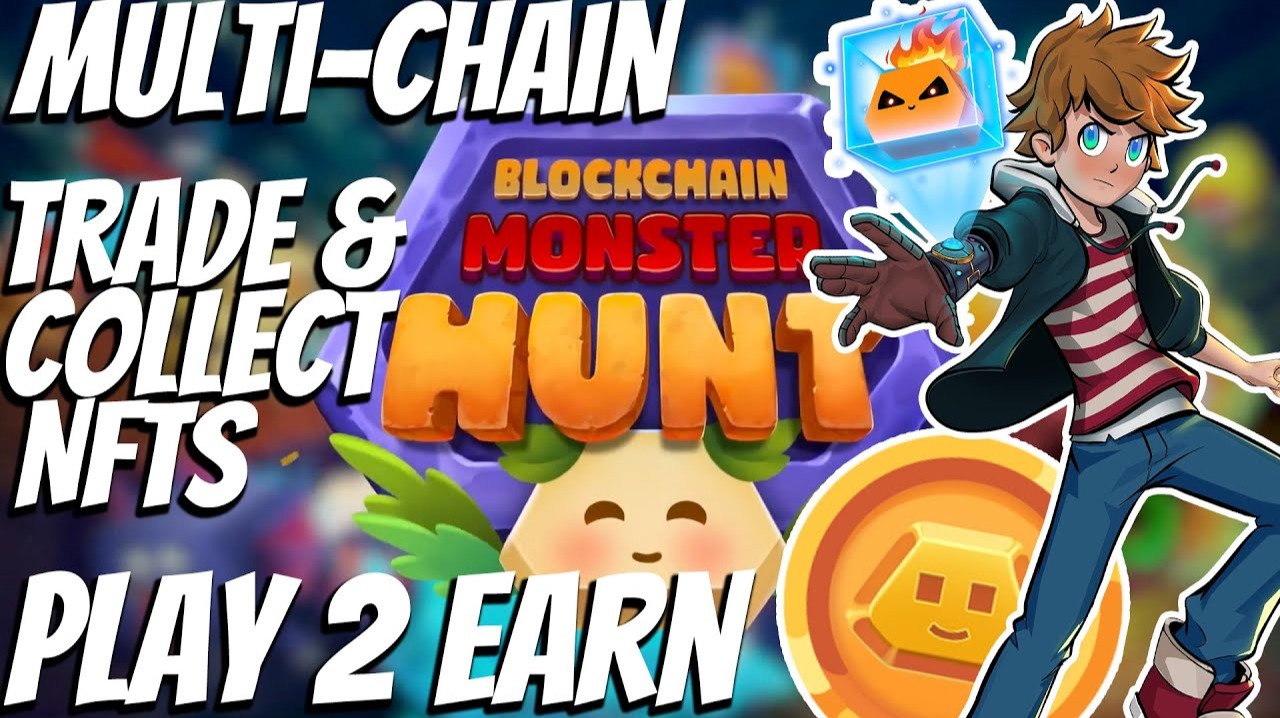 Remember the 90s? Yeah those were the days when we were still little kids just enjoying playing with our old gameboy.

And more likely than not, the games we’ve spent most of our time playing on it are non other than Pokemon games.

And even years after that, gamers still found themselves playing the newer iterations.

Well for 2022, we’ll be greeted by a team of game developers by bringing us a new Play-to-Earn game that is pokemon-go inspired.

And they are giving us Blockchain Monster Hunt.

Blockchain Monster Hunt is a multiplayer monster catching RPG that is heavily incorporated in multiple blockchain networks for the purpose of Play2Earn.

Players can choose to travel the world, catch the rarest monsters you can find, fight wild monsters or battle it out with other players’ monsters for PvP, or even do business by breeding monsters and selling their kids to other players.

There are so many different kinds of monsters that you can collect and fight with and they have a big world you can explore.

But as always, the best part about blockchain games isn’t just earning potential, but fun gameplay elements, too!

And the game developers know this. And speaking of, here’s the game’s core dev team.

You can visit the website yourself and click on them to check out their Linked In profiles.

And you’ll see that the co-founders are former Google and Facebook software engineers who are well versed in blockchain technology.

And they say that they are passionate about connecting gamers all over the world.

So they promise to be honest and to listen to player feedback and prioritize getting involved with their communities in Discord and Telegram.

Blockchain Monster Hunt has sold a total worth of $3.6 Million during one of their biggest Initial NFT Offerings -and just by that fact, you know this game has the potential to be really huge in the future!

Looking at their infrastructure partners, they have the likes of Polygon, Moonbeam, Avalanche, KCC, and even more, well the game does show good signs.

Plus the fact that they have already raised $3.8 Million with Animoca Brands leading the investment round.

You can choose to already play and provide some feedback in their discord server, plus participate in a series of community events for a chance to win some airdrops.

What’s quite special about Blockchain Monster Hunt is that it doesn’t operate on just one blockchain network, but instead, it operates with multi-chain and cross-chain features.

This means that the game is integrated into multiple chains in the ecosystem including Ethereum Network, Binance Smart Chain, Polygon, Moonbeam, and Avalanche. Plus even more in the future!

They pride themselves of this project having an in-house infrastructure where players can move assets cross-chain.

The tokens and the NFTs of Blockchain Monster Hunt will be tradable in many different marketplaces cross-chain without the need of the traditional bridging we already know from the Ethereum Network.

So when playing and earning, you are not forced to pay Ethereum gas fees if you don’t want to. Polygon and BSC are way cheaper!

And not only that, players from different blockchain networks can interact in a multi-chain metaverse and play PvP Battles and such.

How to Earn (Tokenomics)

BlockChain Monster Coin or BCMC is an ERC20 token which players can earn and spend in-game.

This token also serves as the governance token of the whole game.

BCMC is going to be so important since it is needed for use on almost everything you need to do in-game.

Like, increasing the probability of catching monsters, for paying trading fees, for staking and mining BCMC, and even with buying insurance to protect your Monsters by preventing NFT burn battles.

BCMC stake holders are even given VIP special priority as first ones to try out the newest game features -among receiving other significant advantages.

BCMC is earned by staking and also as in-game rewards -but do take note that the rewards amount is adjusted based on game difficulty.

This operates in a manner similar to bitcoin mining rewards which get increasingly difficult when more hash rate is added to the network.

Pretty neat huh? This is very well though of, since it’s a really important feature to help keep the game economy balanced.

Another in-game currency that’s available in the game is ENERGY.

It’s not exactly cryptocurrency, instead it serves as a special currency that is parallelly rewarded along with BCMC tokens.

So after a battle, players can receive either ENERGY or BCMC.

This system keeps BCMC’s value from inflating -and it requires players to develop a deeper playing strategy.

How to Earn (NFTs)

Blockchain Monsters are the very monster NFTs that players hunt for in this blockchain game.

The supply and demand of these NFTs are also regulated through the game difficulty mechanism that we’ve just talked about a few seconds ago.

These NFTs are completely tradable on their multi-chain marketplaces.

There are 3 classes of Monsters in the game: Genesis, Wild, and Artificial.

Those that belong to the Genesis Class are those that are pre-minted and are only obtainable by buying from the launchpads or from other players on the marketplace.

Wild, well as the name suggests, they are those that were caught by the players directly from the blockchain game by playing.

And the Artificial species are those that are a product of breeding. And obviously, you can also earn in the game as a monster breeder.

There are 500 types of different wild monster species and an unknown number of artificial ones.

These 500 different species of Wild Monsters are divided into 50 Genus groups each having 10 species.

And this is a simple table that explains the rarity of each species according to Genus number and frequency of appearances.
The higher the Genus Group number, the more rare the NFT.

And we all know what more rare means. That’s right! More valuable.

The rarest wild monster of all is the one that only appears once in 25 years. Imagine the odds right?

And better yet, imagine being able to catch one. Hehe… Caching!

For more info about the monsters, you can visit their whitepaper or their local encyclopedia.

These are the highlights of the game’s upcoming plans for 2022.

By early January, Blockchain Monster Hunt will be having their Mainnet launch

They’ll also be launching their first ever PvP feature, along with the staking program.

And there’s even more to come soon.

Blockchain Monster Hunt has been continuously giving airdrop events for the community and their still going.

So if you still haven’t joined them on their socials, there’s no better time to join than as soon as now.

So what do you think about Blockchain Monster Hunt? Tell us in the comments below.