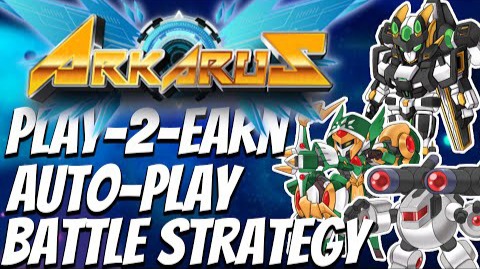 We are back with even more high-tech robot NFTs guys! And this time we’re going to take a look at a project from Thailand that has been in development since last year.

They are getting ready to launch soon, and the information we can get from their game is really plenty.

So today we’re going into a little bit of a deep dive. Lot of cool things to talk about.

ARKARUS is a new upcoming NFT game where Seekers, which is what the players are called in-game, can earn Arkarus Tokens (or $AKS) and some exclusive rewards in the form of NFT art and other collectibles.

ARKARUS is a strategic auto-battle game where every Seeker can build his own roster of robots to engage with other teams of robots from other Seekers.

It is set in a post-apocalyptic galaxy that was once flourishing with plenty of intergalactic trading, technological advancements, and welfare.

But is now devastated by a historic cataclysmic supernova. So the situation now is, the new galaxy that we are in is filled and scavenged by many people of different lifeforms who are all escapees from the old broken galaxy.

ARKARUS is the name of the galaxy we’re in. And every player is called a Seeker -who are the chosen leaders by every group of survivors searching for new inhabitable worlds.

While all are aboard a giant spaceship called Ark. -AKA the Mothership.

Like I said earlier, ARKARUS already has a lot of elements that you will find in the game as a Seeker, so let’s do a little run down about them.

Starting off with the mothership, called Ark. This giant spaceship is equipped with a single-use FTL Drive. FTL means faster than light.  It’s the only vessel strong enough to withstand the supernova blast and be able to transport to neighboring galaxies.

So, at the start of the game, each seeker will evacuate from the old galaxy in the ARK, the first series of motherships invented in the old galaxy.

Seekers will have options to upgrade their mothership, increase robot performance, resource gathering rates and unlock some other special options.

Oh and these motherships are limited NFTs by the way.

So everything you have, all your tech and all your people and crew, are all in here. Including your very own Fabricator.

Your Fabricator is the most important piece of tech in your Ark. It’s the very device that uses your materials to build and manufacture your robot NFTs.

Now, while every Ark has a Seeker, every Seeker has an assistant robot called Marat. Marat is known as the luckiest penguin robot in the galaxy. And he is always there as the one true friend you can always trust.

Vaults! Spreading across ARKARUS are mysterious vaults. Every vault is protected by a barrier of some sort. And it’s not easy to breach them.

But some of these vaults contain some really really importan vaults-protected-by-force-shields-related kind of stuff.

And Apex! Or more accurately, apex predators. I mean, just look at these ancient archives recovered by some of the Seekers. These illustrations depict images of very unsettling creatures.

Lastly, it’s important to understand that ARKARUS is occupied by 6 different factions, and these are remnants from the old galaxy:

The Olympia, Sacred Utopia of Belestia, Empire of Velas, Techno Council of Galann, Free People of Neonite, and The Holy Sanctum of Walkyr.

They are the results of a long history of civilizations of different races and cultures joining together as factions, and these 6 factions somehow remained intact after the supernova event.

What relevance will they have in our galaxy? I guess we’ll know soon enough.

Starbase is ARKARUS’s version of plot lands. A Seeker with a Starbase can form a guild with other Seekers and receive benefits together.

Pilots are also gonna be making their debut soon, I mean if I was a leader in an Ark, I want to have pilots I can rely on.

Operations are all about exploring uncharted territory in Arkarus and collecting valuable in-game resources by breaking inside Vaults.  Battle Mode is going to be playable soon with other Seekers.

And finally, some Gacha! Yep! We’re also gonna have a gacha game system here in ARKARUS.

The way it works is just like the classic random draw. Whether it’s a normal Robot Fabrication or a Xenotech Robot Fabrication, it’s gonna be about random chances of getting normal robots or pulling an SSR robot. And soon to follow, there’s also gonna be some similar functions on getting robot parts and other items.

Now let’s talk about the most important thing in ARKARUS: the Robots!

They are the main elements of this game. Every content is designed to revolve around robots. And these robots have incredibly many different varieties, starting with the robot classes.

There are 4 groups of robots with each group consisting of 2 classes, making a total of 8 different classes:

Under the group of Juggernaut, we have the robot class that’s called “Defensive” -otherwise known as the Tank types, and the class called Heavy Weapon.

Well, the name Juggernaut does seem pretty much on point.

Then we have the Gladiators: Evasive class, otherwise known as Elusive, and Close Combat -or more popularly known as Melee class.

Next is Predator with Covert and Sniper classes. Plus, Sentinels can either be Support class or Range Combat types.

Now, of course, NFTs always have different rarities, and for the Robot NFTs of ARKARUS, there’s SSR, SR, Rare, Uncommon, and Common.

Now Stats! These robots will have different values of stats such as HP, Energy, Attack, Defense, Speed, HIT accuracy, Operation Power, Durability, and probably even some more soon as the game keeps developing.

Things like HP and Attack are pretty much self-explanatory, but Operation Power and Durability is a little more complicated. And here’s how it works.

So basically, Operation Power indicates how efficiently your robots perform operations. It can be improved by robot enhancement.

And this stat is related to Operation Points. Each robot has a maximum of 20 Ops each day. And each operation costs 5 points. So that’s 4 operations a day.

Now Durability is like a finite resource that is replenished only by Recovery Modules which are only available as in-game rewards and as in-game shop items. Every action in-game costs your robot 5 Durability points, and reaching zero renders them pretty much as useless as a broken toaster can.

Now let’s talk about Enhancement. In order to get robots with better stars, you’ll need to fuse the same robot with the same stars.

So one duplicate is needed to enhance a one star to two stars, and 2 duplicates to enhance them to 3 stars, which is the best version of a robot we have as of now.

Skins and ornaments will be available soon, too! And these are only cosmetic and are purely for fashion only. They won’t offer additional stats, which means skins won’t become a pay-to-win problem, which is good in my opinion!

And now, saving the best for last, let’s talk about the Interchangeable Parts of our robots.

Interchangeable parts offer a way for your robot to gain new abilities or even be able to use an attack or ability from a robot of another class.

This system allows you to formulate new plans of attack, and create endless combos and synergies with your team.

Personally I think being able to switch parts of your robots with different abilities and stats is a really cool feature that will make me feel that my robot is really personalized. Really cool! Not gonna lie.

Okay, so now that we already know about the gameplay elements and the robot nfts, let’s talk about what to expect when the game launches soon.

We’ll first be starting with Phase 1, then Phase 2, and later Phase 3.

Phase 1 will be focused mainly on Operation Mode, which is breaking into the Ancient Vaults and gathering resources.

Phase 1 also has Apex Raid. These will be events that will pit Seekers against Apex creatures. Each raid will have different winning conditions and different ways to play.

There’s a chance here to be rewarded with limited items, exclusive robot blueprints, and maybe even an exclusive NFT Art or NFT planet!

Phase 2 will be the gateway to the inner part of Arkarus where we’ll start to battle it out in both PvE and PvP. Operation Mode will be sidetracked a little bit in favor of Battle Mode.

The battle system is a turn-based auto-battle game with a team of 4-5 robots.  If played well and strategized properly, each robot will be very crucial in every battle.

Roster building will be important. You will be able to position your robot in a 9×9 grid and this will affect both how your robots attack or get attacked.

So now you can see that there’s even more importance with taking Interchangeable Parts more seriously for strategic advantages.

And later in Phase 3, after we Seekers have already explored much of Arkarus and collected resources, it’s time we claim our own Starbase and recruit our own Pilots.

And having a Starbase, which is technically your NFT plot lands, will allow you to found and lead your own Union and allow other Seekers to join your cause.

The concept is the same as leading a Guild or a Clan from other games. And this can bring many sorts of benefits.

HOW TO EARN (TOKENOMICS)

$AKS Tokens or ARKARUS is the game’s sole Cryptocurrency and Governance Token.

This token is also a Binance Smart Chain Network token. And to be able to utilize these tokens in-game, they will be converted into in-game credits.

Credits are used to create new robots, upgrade motherships, and purchase from the marketplace and in-game shops.

And as we can see, there aren’t many integrations yet for other passive earnings like Yields and Staking. Coz this game is really more about playing the game and really trading NFTs with other players.

To know more about the Tokenomics and even more details about the gameplay itself, you can check their website and whitepaper. Link in the description below.

Here’s the Development Team of ARKARUS. I checked them out in their socials, and most of them seem to have been working full-time in ARKARUS since last year.

Looking at their roadmap, the next thing in line is the Presale Gacha Bundle with exclusive items game release.

No official date for this yet, but you can keep posted by following them on their socials.

So what do you think about ARKARUS? Tell us in the comments below.