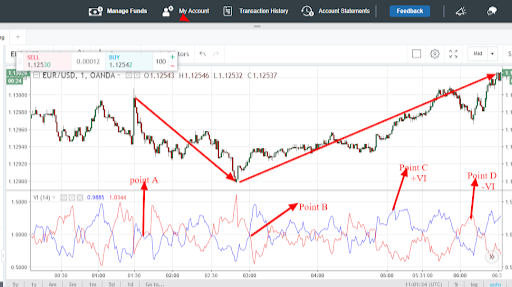 Vortex Indicator(VI): How to analyze the direction of the financial market using vortex indicator

Vortex indicator is a kind of crossover oscillator indicator.

Being crossover oscillator indicator, Vortex indicator was created by Etienne Botes and Douglas Siepman with the main objective of helping traders to know whether the market is in uptrend or downwtrend through crossover points.

According to Etienne Botes and Douglas Siepman, the vortex indicator is composed of two curve lines,that is uptrend which is positive(+VI) and downtrend which is negative(-VI).The uptrend line is normally indicated using the blue/green line while the downtrend line is indicated using the red line. These two curve lines will enable traders to know when to buy and to sell when they are crossing over each other thus making vortex indicator to be considered as a crossover indicator for the oversold and overbought market conditions.

According to Etienne Botes and Douglas Siepman, the values of Vortex indicator is calculated using the following steps;

-By calculating the positive and negative trend movements,that is of +VI and -VI based on previous high and low of current and previous periods as follows;

-By calculating the true range of the last 14 periods as follows;

-The result will be as follows;

Recommendation: If you are a day trader,just use 1 min,5 min,15 min and 30 min time frame while if you are a swing trader just use 1 hour and above time frame if you want vortex indicator to work well for you