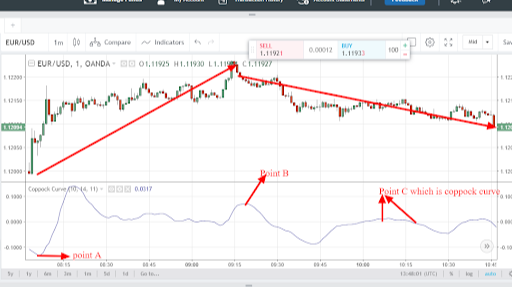 Coppock curve is a kind of momemntum oscillator indicator.

Being a momentum oscillator indicator, Coppock curve indicator was created by Edwin Sedge Coppock with the main objective of mostly identifying the buy entry point mostly in stock though to some extent traders can use it to also identify the sell entry point .According to Edwin Sedge, these entry point will help traders to know whether the market is in oversold or overbought condition.

According to Edwin Sedge Coppock, Coppock curve has 3 period,that is 10 period,14 period and 11 period which are used to derive its value as follows;

ROC is Rate Of Change indicator;

Therefore, Since coppock curve has an oscillation at point 0,it therefore follows that when the coppock curve falls below 0.000 that will be an indication that the market has become an oversold market thus the trader should close any sell position and enter a buy position.On the other hand though not recommendable ,when the coppock curve has risen above 0.000,that will be an indication of an overbought market thus the trader should close any buy position and enter a sell position.This is indicated as from the candle sticks chart below;

From the candle sticks chart above,there are 3 points,point A,B and C. Point A is the point below 0.000 while point B is the point above 0.000 .Point C represents the coppock curve.

At point A ,the coppock curve has fallen below 0.000 thus an indication of an oversold market.This will signal the traders to close any sell position and open a buy position since the market is starting to  move upwards.

On the other hand though not recommendable,at point B ,the coppock curve has risen above 0.000 thus an indication of an overbought market.This will signal the traders to close any buy position and enter a sell position since the market is starting to move downwards.

Recommendation:If you are a day trader,just use 1 min,5 min, 15 min and 30 min time frame while if you are a swing trader just use 1 hour and above time frame if you want coppock curve indicator to work well for you