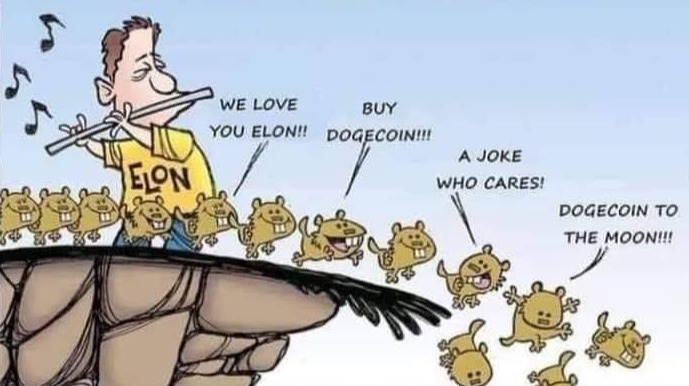 $STOPELON - This is like the dark version of Doge

"This is like the dark version of Doge. The opposite of Elon pumping. Every time he manipulates markets for his amusement, this is the token to express your dissent."

Elon Musk is an influential, if controversial public figure. The wealthiest man alive with a vision for the future, but a penchant for divisive tweets and public statements that has captured the imagination of part of the crypto space for better or worse. His influence on Doge is brazen, and Tesla's high profile interactions with Bitcoin have grabbed headlines this year as well.

However, the crypto markets were sent reeling recently when the TechnoKing announced to the world that Tesla would no longer be accepting bitcoin payments after citing environmental concerns, though they had no plans to divest themselves further of current holdings.

This has sparked a wave of backlash, anger, and the emergence of a token on the Binance Smart Chain called "StopElon" which has surpassed $3 million dollars in market cap recently. The creators of this token have the following criticisms of the tech billionaire:

1) Tesla and Elon both must have been aware of the environmental impacts of bitcoin mining from the outset. To come out months later with these concerns after spending 1.5 billion dollars on the asset seems manipulative. Many articles compare the environmental costs of mining Bitcoin and authenticating transactions on the block chain favorably to traditional financial system transaction costs and gold mining operations around the world.

2) Immediately following this, Elon posted: "Working with Doge devs to improve system transaction efficiency. Potentially promising." It should be noted that, in the past, Elon was personally pumping Doge the whole time Tesla was buying Bitcoin. It should be noted that a recent anticipated Saturday Night Live appearance disappointed fans of Dogecoin earlier in the week though it is holding strong since.

3) Tesla has already profited significantly off of its Bitcoin investment, but the details of halting payments for its vehicles in the digital asset were only released well after closing out 10% of its holdings for a massive profit.

With the recent surge in popularity of the token, (and other knock-offs of a similar name,) it's clear his critics are seeking ways to express themselves. This token may be interesting to watch in the future as controversial moves and comments seem to be a regular occurrence for Elon.

A lot of us folks lost money when Elon Musk took a u turn on his support for bitcoin after cashing in on some of the investment himself and in Tesla. We proudly present to you a token which signifies the opposite of giving up on its supporters. Relaunched after spotting a mistake on the code, the devs could have easily cheated and ran away with money like Elon would do, but instead they chose to return the coins and strengthened the faith in its investors.