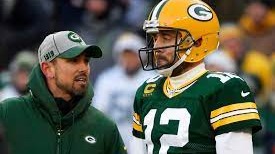 In last years draft the Green Bay Packers under new head coach Matt Lefleur chose to draft QB Jordan Love and it later came out that Aaron Rodgers was not happy about being left in the dark about the choice.  Rodgers was obviously blindsided by the pick as more statements came forth in the following weeks.  Thus began the now more explosive topic of why the Packers didn't draft to further build around Rodgers.  It's an explosive topic at this point because there was a leak of Rodgers speaking privately to some within the organization that he no longer wants to be a Green Bay Packer.  Slice it up however you wanna, but his disappointment/anger/however he feels is fully justified in my opinion.  Aaron Rodgers who at one point was projected to be drafted at the top of his class fell in the draft to the Packers who at the time still had Brett Favre under still fairly new coach Mike McCarthy.  I watched that draft and with absolute certainty knew that Rodgers would be drafted by the 49ers who at the time desperately needed a QB.  With Rodgers being available and being a California native who dreamed of playing for the 49ers it was a no brainer to me.  For whatever reasons they didn't take Rodgers and I remember watching ESPN cutting the camera's back to Rodgers many times and there was a point where he just shook his head in disbelief as he had yet to hear his name called in the draft.  I watched in disbelief as it happened and while watching, I turned to a friend I was watching the draft with and said "The league is about to do the Packers a favor because Favre is leaving and you can't have one of the founding franchises in the league become irrelevant for an extended period of time".  I said it at that moment because I knew the Packers were gonna get Rodgers after seeing so many teams pass on him despite his high ceiling of potential and the level he was already at as a QB going to the next level.  Keep in mind also that Rodgers was drafted in a dying era of draftees having to sit on the bench and learn how to be a leader of men on the field first unless the team was in a position to make immediate improvement at certain positions.  He sat on the bench for 3yrs after being drafted and he was able to learn from Favre in many ways about many things.  When it was his time to take the field and lead the Packers through the transition, he did it more than well and won a Super Bowl.

This brings me to the next topic that most people are quick to point out and I quote many who've said it "What has he done and what is his record since the SB that he won?".  I personally don't think that is the question to be asked.  The question should be what has the organization done since he won the SB?  Here you have a QB that is clearly one of the best in his draft/generation and one who's continuously had the franchise be named as a SB contender year in and year out, but when the team doesn't get a SB title, the finger is pointed at him.  Year after year surrounding him with developmental talent and that's not a knock on any offensive player that played with him because not everyone respond's to the playoff atmosphere the same way.  Yes, he's had some bad games too, but that is why in my eyes free agency is more important than the draft.  Just go back and look at the free agent's the Packers have signed since Rodgers took the helm and how many complimented him as a QB on offense and defense.  Here you have a once in a lifetime talent of an arm with Aaron Rodgers and they just didnt get it right.  I watched the same thing happen to Dan Marino and in my opinion, Rodgers has the greatest arm at QB since Dan Marino.  When you have a guy like Rodgers, you go all in for as long as you can to win the trophy. Patriots did it with Brady and as much as everybody tries to knock them for moving off of Brady, they did the right thing, but that's another topic.  My point is that the Patriots built a hell of a defense to support Brady during the style of play in that era and that's a fact.  Brady didn't have eye popping stats, but he did what he was supposed to in clutch moments and that 's it.  The year they built around him they went undefeated in the regular season, but lost the SB.  That's not a knock Brady, it's more of  a nod to management because they went on to win SB's after having a high powered offense.  They went back to having player's that compliment the offensive scheme and that complimented what Brady was best at as a QB.

My last point is that Aaron Rodgers has been undersupported for many years and since winning the SB deserved the opportunity to be in the meeting room pre-draft.  They haven't landed a big name free agent since Reggie White(God Bless His Soul) and the Coach at the time(Miike Holmgren)who made a classic recruiting pitch(look it up) believed and knew he was the missing piece to the puzzle on defense for the Packers to get the trophy back in "Title Town".  Rodgers isn't the bad guy here. No matter how much sports media will try to make you think he's "Diva", "Whiney", etc.  The real truth here is that when a team get's a new coach and/or new GM there's usually a QB change to follow.  That is the way of the league for as long as I can remember.  Rodgers' situation is no different.  I knew off top that this would be the end result as a fan of football. Many of great players have ended up with other teams a result of age or a regime change in the front office.  However, I don't think this will end with Rodgers finishing his career as a Green Pay Packer. The question is how long will it be before he's moved to another team or flat out retires to host Jeopardy for a season?