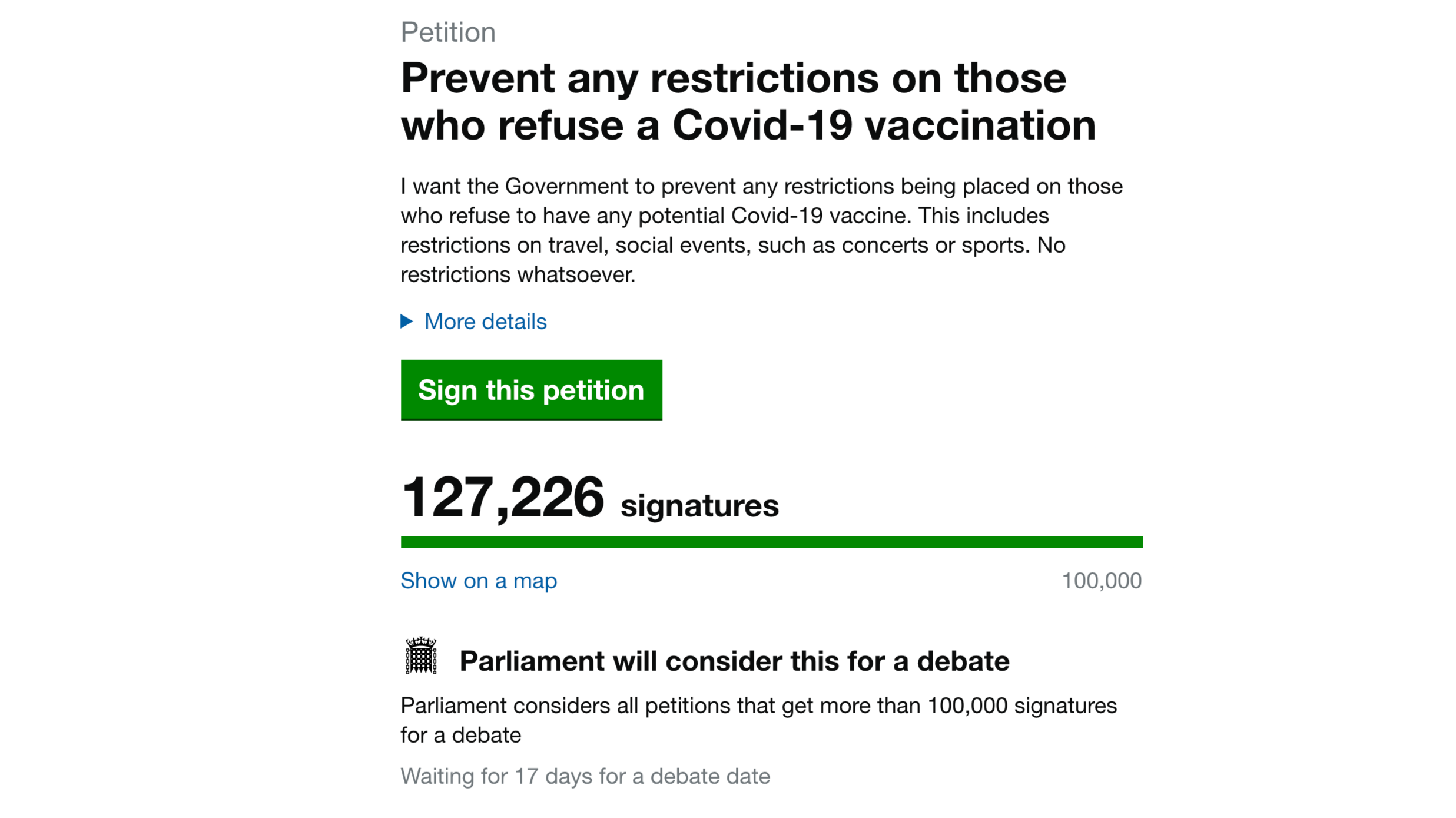 (ADDED NOTE 17/09/2020: You may well now see a see green banner has been added to the top of this article by PublishOx directing you to the World Health Organisation's website for more information regarding COVID-19.  It is worth remembering the 2nd largest financial contributor to the WHO is the Bill and Melinda Gates Foundation.

The very same organisation that is financing and promoting the introduction of a worldwide mandatory vaccination.  Also if you research the WHO website beyond the recommendation and dictates, you will find the according to their own statistics, the global recovery rate for the COVID-19 virus is 99.6%.

Thank you PublishOx for supporting the sharing of truth and the countering of misinformation......or at least I think that was your intention wasn't it?)

If you saw my article posted on the 13th September 2020, then you will know that a UK Parliamentary Anti COVID-19 Vaccination Petition Has Passed 119,000 Signatures.

Since then things have taken on a new pace and it seem right to publish a new update on how things now stand.

During the intervening 48 hours the UK's Ministry of Health and Social Security has issued the required response to the petition as it had passed the 10,000 signature threshold.  The UK government's response was slow in coming, take 36 day to be issues and clarified little in regard to the concerns raised by the petition.

This noncommittal response probably should not come as any surprise and almost certain should not be relied upon, as the present UK administration, under Prime Minster Boris Johnson, has a strong track record of stating one thing only to do the opposite a short time later.  A case in point being the current UK lockdown which was stated as unlikely and unnecessary but then introduced, almost without warning, 3 days later.

The lack of comfort and reassurance gained from this official response may be partly responsible for the the acceleration in the number of people now signing this petition.  When writing the previous article the number of signatories stood at 119,000.  This has now leaped by more than 7,000 name and is currently increasing at the rate of 145 new signatures per hour.

While some argue that in proportion to the UK's whole population this is still a low ratio, it is worth noting that since its first publication on the 4th August, it has received no promotion from any other source apart from the organic sharing of it link amongst concerned citizens.

Also a point that has sometime been made in opposite to the concerns raised by the petition, is that those signing it are against a vaccine for COVID-19.  Although this may be the position of many signing the petition, this is not the concern highlighted by it.  The petition calls for the rights of those who chose not to receive any vaccine to be respected and for them not to suffer any direct or indirect limitation of their liberties because of this.  This is a civil and human rights issue and not a health one.

The UK Government's full response outline the benefits of vaccination to society and its mentions a number of historical examples of vaccine contributing the the improvement of the general health of humanity.  Depending upon ones perspective one may or may not agree with these statements, however they again do not address the underlying concerns of the petition.  Also it would not be unreasonable to suggest that if the majority of the UK population choose to receive a COVID-19 vaccine then, according to the UK Governments own argument, those who choose to not to receive it pose no threat to anyone but themselves.

Surely as intelligent and mature individuals, in this case we all should be allowed to make the same judgement to our personal risk as we do if we choose to smoke a cigarette, parachute out of a plane, hunting with a gun, etc.

All activities that have their inherit risk and dangers but are as of yet not illegal.  The last one in fact, 'hunting with a gun', has received special dispensation from the UK Government to allow it to continue no matter many people participate.  This despite the limitation that social gathering can not involve more than 6 people placed upon the general population - now officially know as the 'Rule of 6".

At the time of writing, the current total for this petition stands at 127,226 with the UK Parliament still to respond as to whether it will debate these concerns.

If you are a UK citizen and are also concerned to preserve your civil liberties and right of sovereignty over your own body, you can sign the petition here:

Thank you for reading this article and watch this space for further updates.

Also if you have a few moments then is a very interest video to watch: