FOMO. The fear of missing out.

I guess, a lot of you have already heard about it. But what exactly is the meaning behind FOMO?

It's a weird psychological effect. You can see an example of it at different places. For example, the cinema. I live in Austria and if you go to the cinema, you have to buy a ticket. Every ticket is for a certain seat, that means, as soon as you buy the ticket, you know exactly where your place in the room will be.

You buy some snacks before the movie starts and then you are allowed to enter the room where you can watch the movie. But wait, what's that?
A waiting line? Seriously? A waiting line before the entrance to the room? And the people are really waiting 5 minutes or even more to enter the room. The people even cut in line and push to the front to enter the room as the first. Why? You have absolutely NO advantage of being the first there. It doesn't matter if you are first or last, because you have your fixed seat anyway. Why are so many people still doing this?
It’s FOMO. Once again, the irrational fear of missing out. Even if they know, that they have a reserved seat and that it doesn’t matter, they are still under the influence of FOMO. 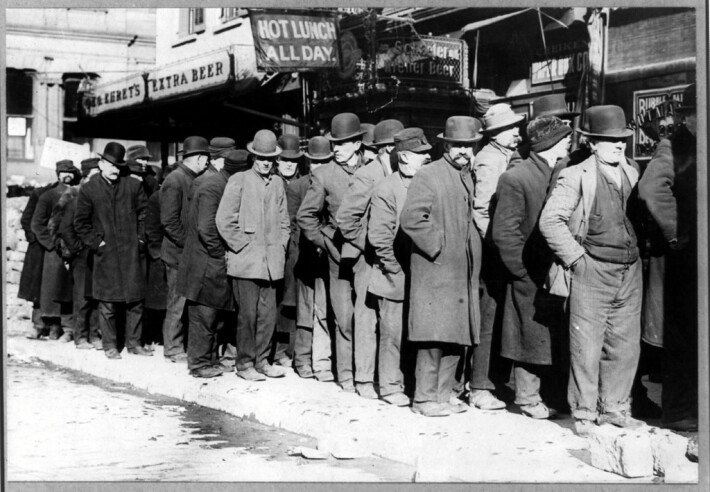 (Yes, this is a waiting line. Maybe it's an old picture or just an opening for a new Apple-Store, who knows?)

But why is that relevant for the world of cryptocurrencies?

Because FOMO, once again. As Bitcoin started, a lot of people missed out on it. Of course they did, noone could have known before, that the price of Bitcoin would rise to the sky. But now everybody knows it and everybody is afraid of missing out on this business opportunity. But that’s a wrong assumption. If everybody knows about something, it won’t rise that high again. The surprise effect is gone now.

The price keeps going up and down and of course you can earn money with it. But the chance to become a millionaire by investing 100 Dollars is gone and it will never be back. At least not for Bitcoin or other cryptocurrencies.

Why is the time to become a millionaire with bitcoing one?

Currently, 1 Bitcoin is around 10.000 Dollars. That's a large amount of money. And it is possible, that in a few years, 1 Bitcoin will be worth 50.000 Dollars. It would be a good, even a great investment then. But it's still "just" 5 times the amount you invested. A few years before, you could buy 1 Bitcoin for 3 Dollar. If you invested 3 Dollars back then, you would have around 10.000 Dollar now. But that's not going to happen again. The amount of money someone needs to invest to let Bitcoin grow that much again is way too high. That's just not gonna happen, if you think about it for a few seconds.

People will have to realize, that the world of cryptocurrencies is no hidden world anymore, it's mainstream. And you can’t become rich out of nowhere if you go with the flow. But still, people buy Bitcoin and lose money, because they have no clue what they are doing. Because FOMO. This god damn FOMO. Everybody hopes to become rich with Bitcoin and nearly everybody loses.

What can you do against it?

Well, that’s easy. First of all, be aware of it. That’s the first step. And now that you read my article, you are aware of it.
Next time, before you invest money in a new cryptocurrency or Bitcoin, think! Is it a good investment? Or are you just influenced by FOMO? And what do you want to achieve?

If you want to make some money and if you believe in cryptocurrencies, go ahead and put some money in it. You can earn with it. But don't invest money and hope, that you will be the next crypto-millionaire. That ain't gonna happen, except if you invest 500.000 Dollars before.

Bitcoin (BTC) FOMO What are you waiting for?

I am a blogger and write about legitimate methods to earn money online at www.shantisplace.com. I am also a crypto enthusiastic and write about cryptocurrencys. I also write sarcastic posts about random things. Don't take my articles too serious :-)

Here I write about different weird and funny things. Don't take it too seriously :-)