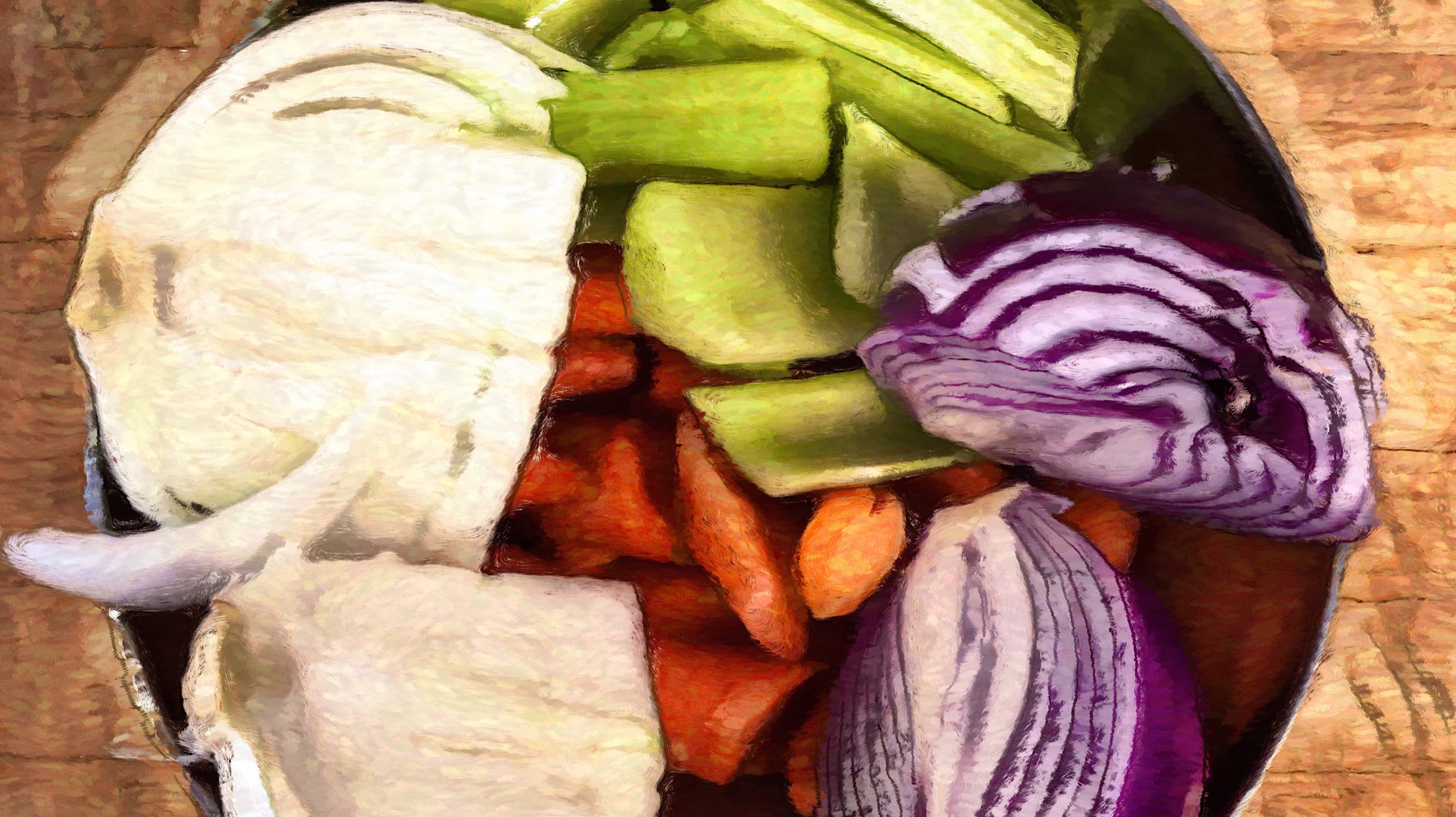 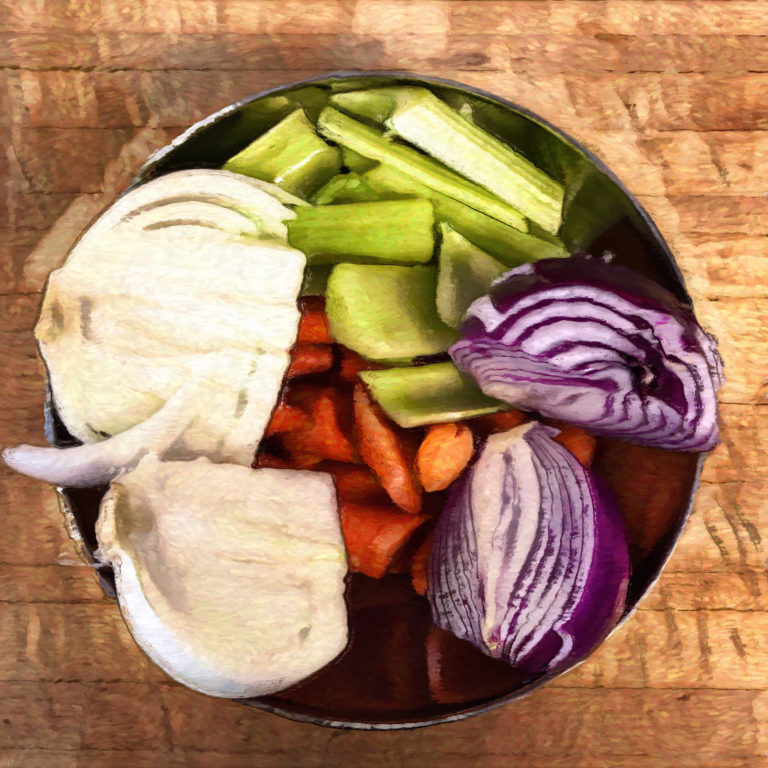 Mirepoix by way of Kadinsky (Oilist)

Mirepoix. The flavor base of French cuisine consisting of diced onions, carrots and celery cooked in butter or oil at a low temperature to sweeten the mixture and then used in everything from pan sauce to grandma’s chicken noodle soup. This concoction dates back to 18th century France and is largely attributed to Charles-Pierre-Gaston Francois de Levis who was a field marshall in the French army. By the 19th century, the term “Mirepoix” was enshrined in many books about cooking and preparing foods that it had become commonplace in the French vernacular.

When making mirepoix – whether it be for soup, stew, or pan sauce – you should keep to the traditional ratio of 2:1:1; two onions, one carrot and one stick of celery. If you are using too much carrot then the dish will be too sweet as carrots have a lot of sugar. Keep the leaves from the celery separate. They are excellent chopped up and put into the dish’s final simmer before service. Celery leaves are an amazing secret ingredient that your grandmother knew about but you are in the dark about how it imparts amazing flavor to soups. The leaves of the celery also have the highest amount of nutritional value in the plant and contain Potassium, Calcium and Vitamin C.

Whenever you are cooking mirepoix you do not want to overcook or brown the vegetables but merely get them to the point where they are translucent and soft but yet still have a little bit of bite to them. The classic method involves using either butter or oil and frying them in a skillet or dutch oven. If you are making a meat dish, sear the meat first before adding more fat and cooking the mirepoix.

The Italian version of this trinity is the same although it is typically fried in olive oil with the addition of fresh parsley and garlic. Italians call this soffritto (which means “fried slowly”) if it is already cooked and battuto if the vegetables are still raw. The word “battuto” translated from Italian means “beaten” so the vegetables are sometimes more finely diced or smashed down.

The Russian version of mirepoix is called smazhennya (in the Ukraine it is known as zazharka) and it has the popular onions, carrots and celery but also often includes beets and sometimes also parsley root. 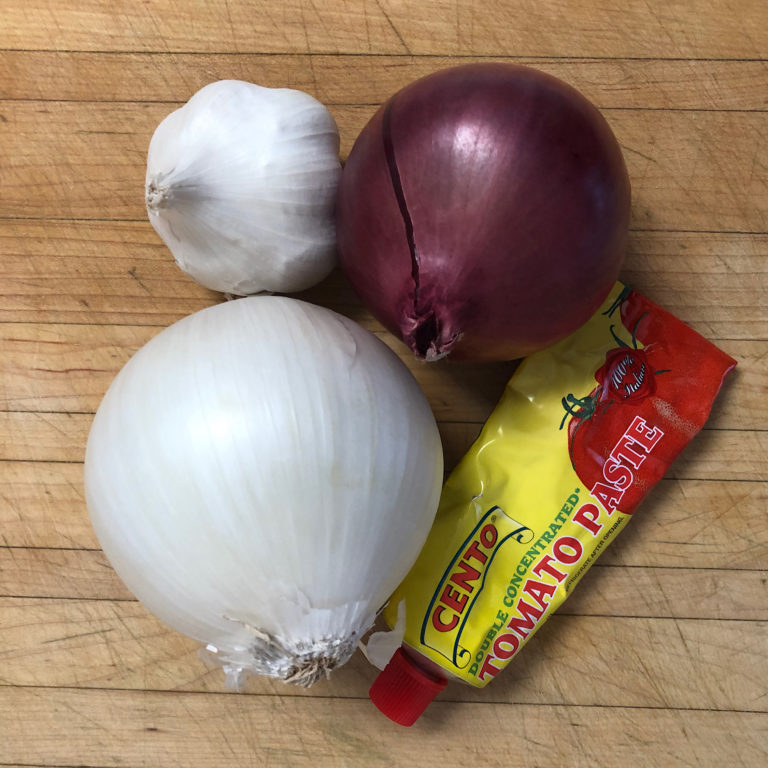 Spanish Sofrito (In Portugal referred to as refogada) is the equivalent of French mirepoix or Italian soffritto and is the flavor base for empanadas, paella, soups and stews. A good quality olive oil is the fat used and also a sweet green pepper is often added. The vegetable mixture is slowly cooked until the sugars start to deepen and bloom. It is almost always supplemented with a good smoked paprika such as Chiquilin from Spain. Of course, you could always learn how to grow your own peppers and smoke your own paprika like I do!

First, you finely dice the onions and start to cook them over low heat for a few minutes until they begin to soften and turn translucent. Then you add a finely diced sweet green pepper such as a green bell pepper, or if you want to make a Puerto Rican/Caribbean version then use Cubanelle or aji dulce. Most versions of this use your standard bell pepper  and if you do not have those varieties at your local grocer or do not grow them yourself (but you should.) Aji dulce is a pepper in the Chinese capsicum family that looks similar to a habanero pepper but lacks the intense heat. Then add your garlic and sauté until it becomes fragrant before finally adding your fresh chopped tomatoes and smoked paprika. Continue to cook over low heat until the mixture takes on the consistency of a sauce. You can make this ahead of time and store it in the fridge to give any dish some added flavor. If you are storing in the refrigerator it should last about a week. 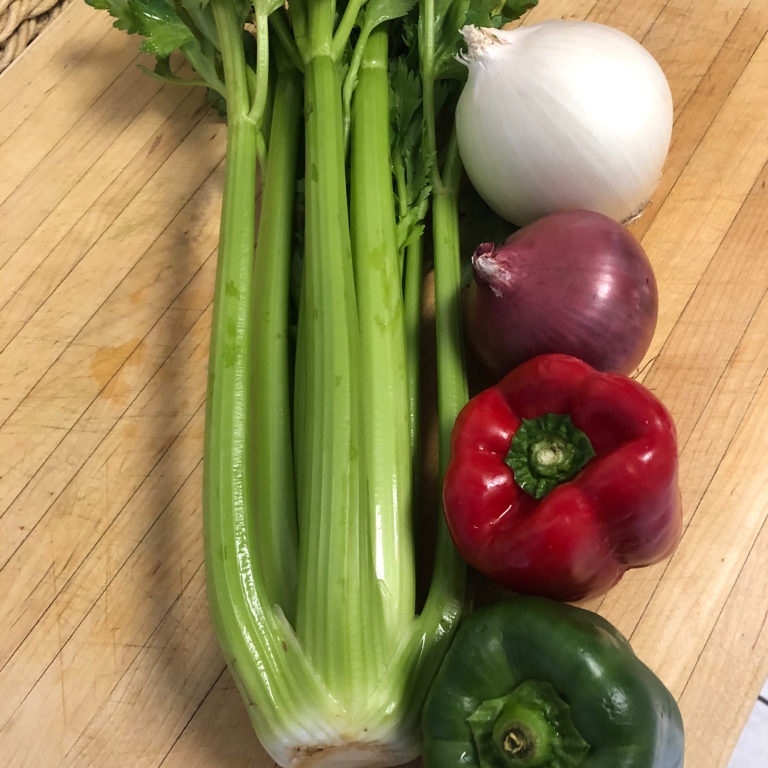 The term “Holy Trinity” is largely attributed to being coined by New Orleans chef Paul Prodhomme to describe the three main ingredients of onions, celery and green bell pepper and is a reference to the Father, Son, and Holy Spirit in Christian theology (the addition of garlic to the mix is called “adding the Pope.”) This is the vegetable base that gives amazing flavor to dishes that are famous to New Orleans such as Étouffée and jambalaya. The vegetables used bear more resemblance to the Spanish sofrito then they do the French mirepoix but it is unknown why carrots were omitted. The ratio for the holy trinity is 1:1:1; one onion, one celery stalk, and one green pepper although I have seen some use a ratio that is closer to traditional French mirepoix using the ratio 2:1:1 with onions being doubled. While Cajun and Creole are often lumped into the same category, they are actually somewhat distinct from each other. Cajun cooking comes from the French-Canadian settlers who adapted traditional French techniques (such as using mirepoix) to their new surroundings creating their own unique sort of rural cooking while Creole is sort of a “catch all” ethnic term that comprises all the other groups that influenced Louisiana cuisine from the Native Americans to the Africans as well as the Spanish and people from the Caribbean islands. The traditional trio is made up of green bell peppers, onions and celery but many add red bell pepper and garlic as well. The phrase “holy trinity” also is applied to spice and herb mixes as well with it being a blend of both black and white pepper with cayenne for spices and oregano, bay leaves and parsley for herbs. 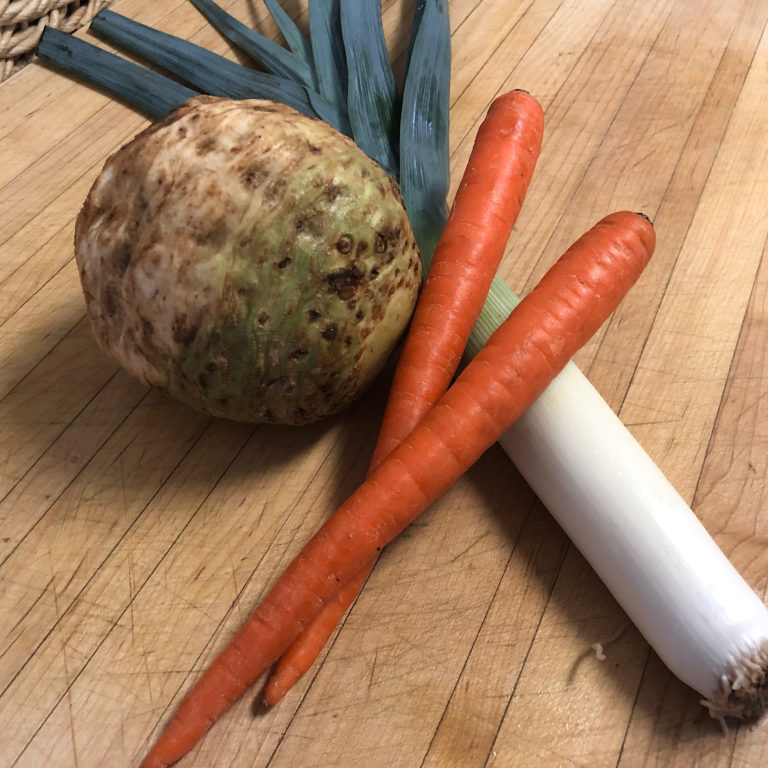 Suppengrün is a German soup base mix of two carrots, one leek and one quarter of celeriac. It is the German equivalent to mirepoix in many dishes and the name translated means “soup greens.” If you are an American then chances are you are not familiar with celeriac. Celeriac is cultivated for its root while the celery we tend to eat is cultivated for its stalks. It has nearly the same flavor as the celery we are familiar with but if the root is harvested while young it will have a more intense flavor as well as softer flesh. The older the harvested root gets the more its flavor diminishes over time. Parsley is also typically used in this German flavor base and also they use the kind with the super-curled up leaves, not to be confused with Italian Parsely which has a more intense flavor and can have a much bitter flavor. In markets all over Germany, these “soup bundles” can be purchased pre-made for a cheap price as it is a staple of the country’s cuisine.

The Polish have a very similar flavor base that is called włoszczyzna and it has carrots, leeks and celeriac but also adds parsley root as well as bay leaves and all-spice. The word włoszczyzna translated from Polish literally means “Italian stuff” and comes from the 16th century when a Polish king married an Italian princess and the Polish people were introduced to tomatoes as well as other vegetables. Hitherto, they only knew cabbage and root vegetables and ate diet that was heavy on meat as well hearty soups and stews using root vegetables and cabbage.