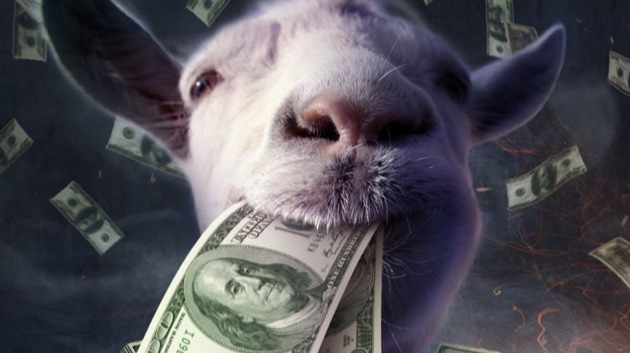 What could Mark Zuckerberg's goats reveal?

That's a funny story I just found out...

As we all know Mark Zuckerberg is the unquestionable and well known player in the digital entrepreneurial digital world. For the silly uninformed ones, he is simply the founder and CEO of Facebook, the largest social network in the world.

The billionaire behind the world's largest social network posted on his profile a simple photo of two goats he has on his personal farm. So what??? What is the fuss all about?

It's also a known fact that, differently from many huge tycoons out there, Zuckerberg has a very discreet attitude, being usually quite reserved and private about his personal investments.

Surprise, surprise... Guess what are the names of his beloved goats? Max and Bitcoin.

Could we read his recent 'goat' post as a subliminal, perhaps even like a 'secret message' to his enthusiasts? Is it possible that, maybe, Facebook god decided to fall for the charms of Elon Musk's hype of Dogecoin?

I'm not sure if it's just my perspective and if many people get the link about the goat names. The expression “Max Bitcoin” is occasionally used as a hint to people to buy Bitcoins. It's almost like he is saying, 'hey everyone, bump your BTC portfolio and keep it safe and sound there.'

It just seems to be too much of a coincidence, considering that the sentence is very familiar to many BTC maximalists. I have even found other sharers of the same opinion, like in an article written by the Brazilian author Matheus Henrique (link bellow).

In his text, he also points out 2 extra factors I didn't even think about. Firstly, he mentions the alternative use of the word GOAT - 'Greatest Of All Times'. In the end, he also reminds us that it is the very first time ever that Zuckerberg publicly mentions anything that is related to cryptocurrencies.

Will we we have a new super bullish push on BTC soon?  Is this just pure speculation/conspiracy/creative thinking? Let's keep our eyes open and for the ones that can read between the lines, perhaps it's time to further boost their BTC wallets

Trying to become a crypto geek

Comments, news, and basic opinion about the crypto universe