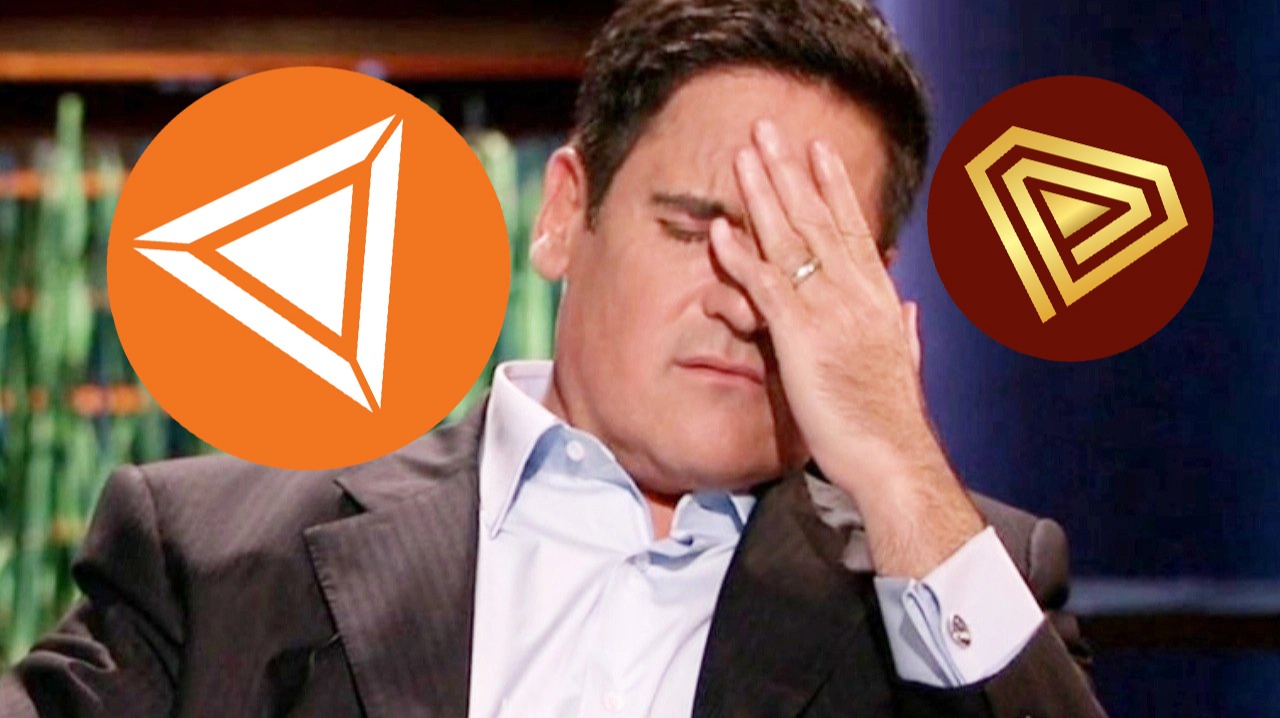 Before detailing the crisis Iron Finance faced recently, it is first needed to define what a bank run is. Wikipedia explains well what a bank run is, and so will be used to define the term. According to Wikipedia, a bank run is "when many clients withdraw their money from a bank because they believe the bank may cease to function in the near future." The webpage on bank runs is attached below in Further Reading for additional reading if desired. 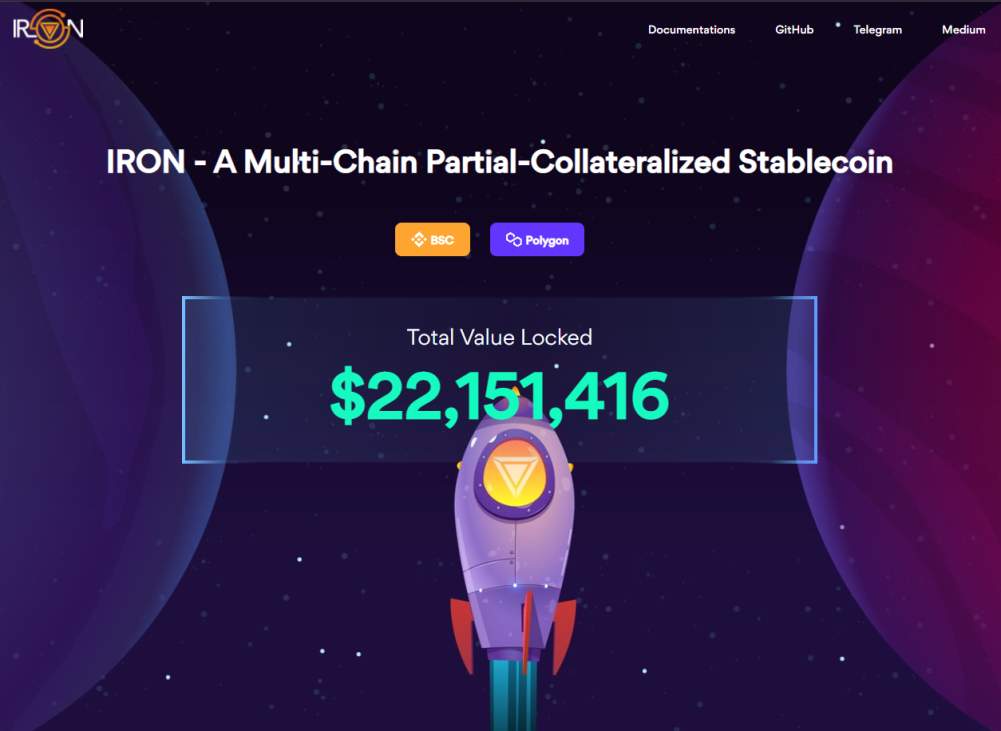 The first indication of a crash for Iron Finance was around 10 am UTC (Coordinated Universal Time) on June 16. It was noticed by the Iron Finance team, which went as follows in their post-mortem announcement on the bank run:

Around 10 am UTC on 16-June-2021, we noticed some whales began to remove liquidity from IRON/USDC, then sold TITAN to IRON and then IRON to USDC directly to liquidity pools instead of redeeming IRON, which caused the IRON price off-peg. TITAN dropped from 65$ to 30$ in 2 hours, which later recovered in 1 hour to 52$ and IRON fully recovered its peg.

After this event, Iron Finance went back to usual. However, around 3 pm UTC, the crash occurred, sparked by an exploit. A couple of big holders of Iron Finance began to sell, which was similar to the previous situation. However, rather than having the Defi's users being calm and trusting the code as before, users began to panic. Many started to redeem IRON, which converts the US soft peg into about 75% USD Coin (USDC) and 25% TITAN (rates fluctuate), and sell TITAN, causing a massive sellout demand for the market. TITAN fell from its ATH (All-Time High) of $64.19 a few days ago to now virtually $0, a completely surprising event for one of the MATIC Defi big guns, not many other Defis available as opposed to other blockchains like BSC (Binance Smart Chain) and the ETH (Ethereum) blockchain. 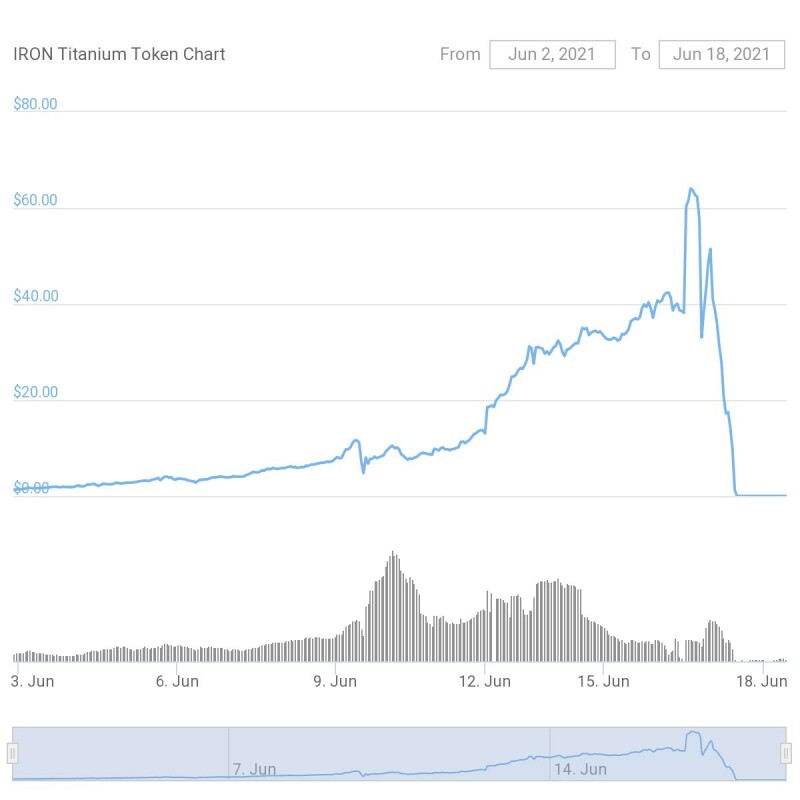 Iron Finance claims that "nothing could be fixed in the current system," though plans to introduce more products in the future, learning their lesson from the bank run. The Defi promises that an in-depth analysis of the protocol will be conducted, hiring a third party, to understand how the bank run came about. Coming soon Iron Finance services IronBank (lending service) and IronSwap (pegged assets-focused swap) have already been made and are projected to become live for testing soon. Iron Finance also claims that Iron stablecoin v2 will come, perhaps to replace the current IRON stablecoin, which does have some issues in terms of reliability, experiencing many crashes for the stablecoin even before the bank run happened. 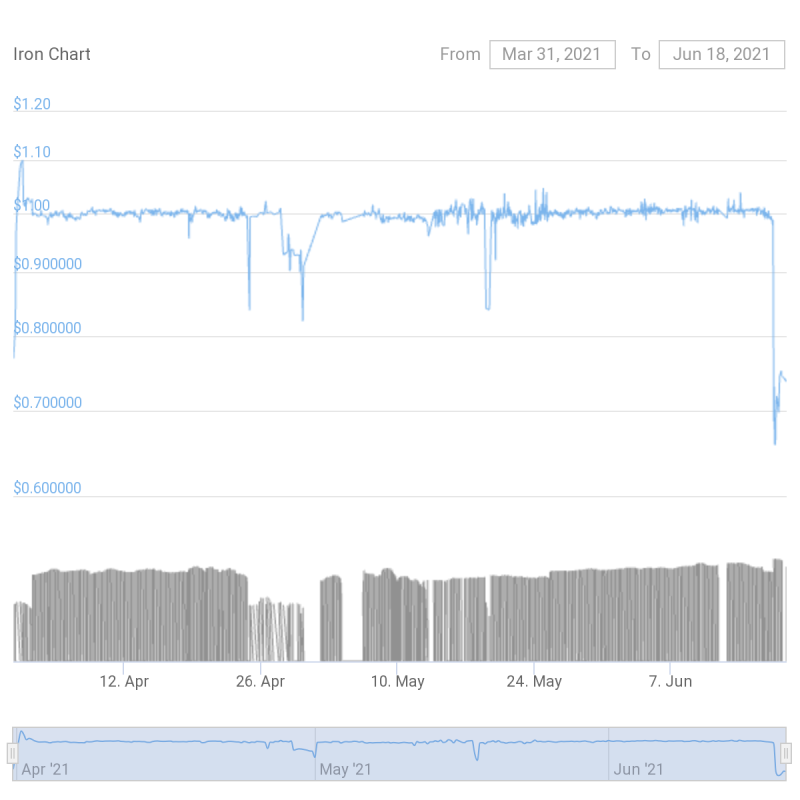 In a blog post, linked in Further Reading, by Mark Cuban, he reveals to have provided $75000 for an LP (Liquidity Pool) of LP pair DAI (US soft peg) and TITAN, or DAI/TITAN conventionally, on the MATIC Defi Quickswap. This allows users to swap between the DAI and TITAN, Cuban collecting a percentage of the remaining fees, 0.25% to be exact. He details his situation as follows:

I’m a small LP for QuickSwap. I provide 2 different tokens (DAI/TITAN) that enable QuikSwap to offer swaps between these two tokens. As you can see here, this pair is one of many, and you can also see that based on the .25 pct of volume in this swap that Quickswap pays, my return on my initial $75k investment (based on fees only) as of this writing, is an annualized return of about 206% (Based on the fees earned in the last 24 hours. This return percentage will vary all over the map depending on the activity.) But the cool thing is while I don’t get any extra rewards for this pair (you reading this Titan and Quickswap ???), I am currently the only LP in this pool, so I get 100pct of the fees. In every pool, the LPs, get a percentage of the fees based on the percentage of the liquidity they provide. 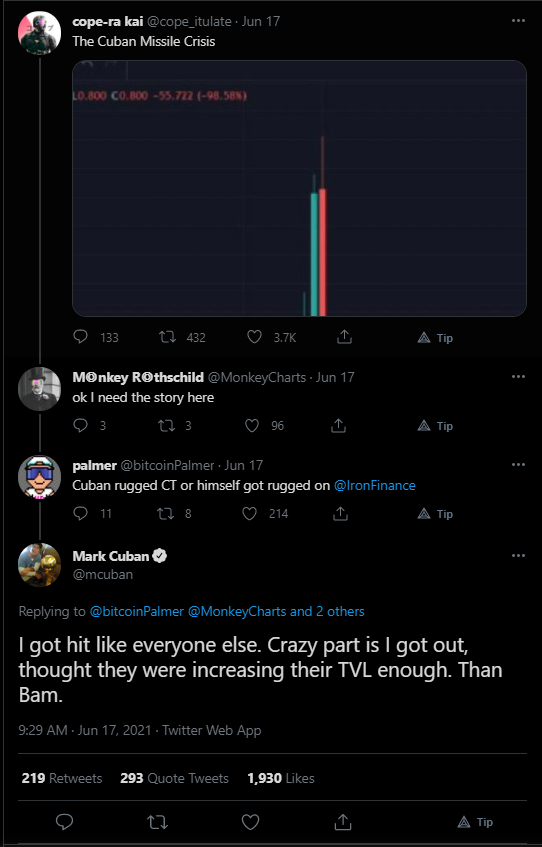 In a letter to media company Bloomberg, Cuban explains his relationship to TITAN, going as follows:

I read about it. Decided to try it. Got out. Then got back in when the TVL start to rise back up. As a percentage of my crypto portfolio it was small. But it was enough that I wasn’t happy about it.

Although unhappy and impacted, Cuban states that "it's really on me for being lazy."

In response to the bank of Iron Finance, Cuban has called out for stablecoin regulations, the bank run being an example of why regulations are needed. The ideas concerning how the regulations should become established and expressed go as follows:

Should we require $1 in U.S. currency for every dollar or define acceptable collateralization options, like U.S. treasuries or to be able to call itself a stable coin? Where collateralization is not 1 to 1, should the math of the risks have to be clearly defined for all users and approved before release? Probably given stable coins most likely need to get to hundreds of millions or more in value in order to be useful, they should have to register.

The US has already considered regulations on stablecoins before. In 2020 December, the bill nicknamed the 'STABLE Act' was passed that makes stablecoin issuers get a banking charting and follow traditional banking regulations. With the crypto crash over May, there has been an increased usage of stablecoins, which has called on for regulations on stablecoins. Federal Reserve Chair Jerome Powell on the 20th May states that "as stablecoins’ use increases, so must our attention to the appropriate regulatory and oversight framework."