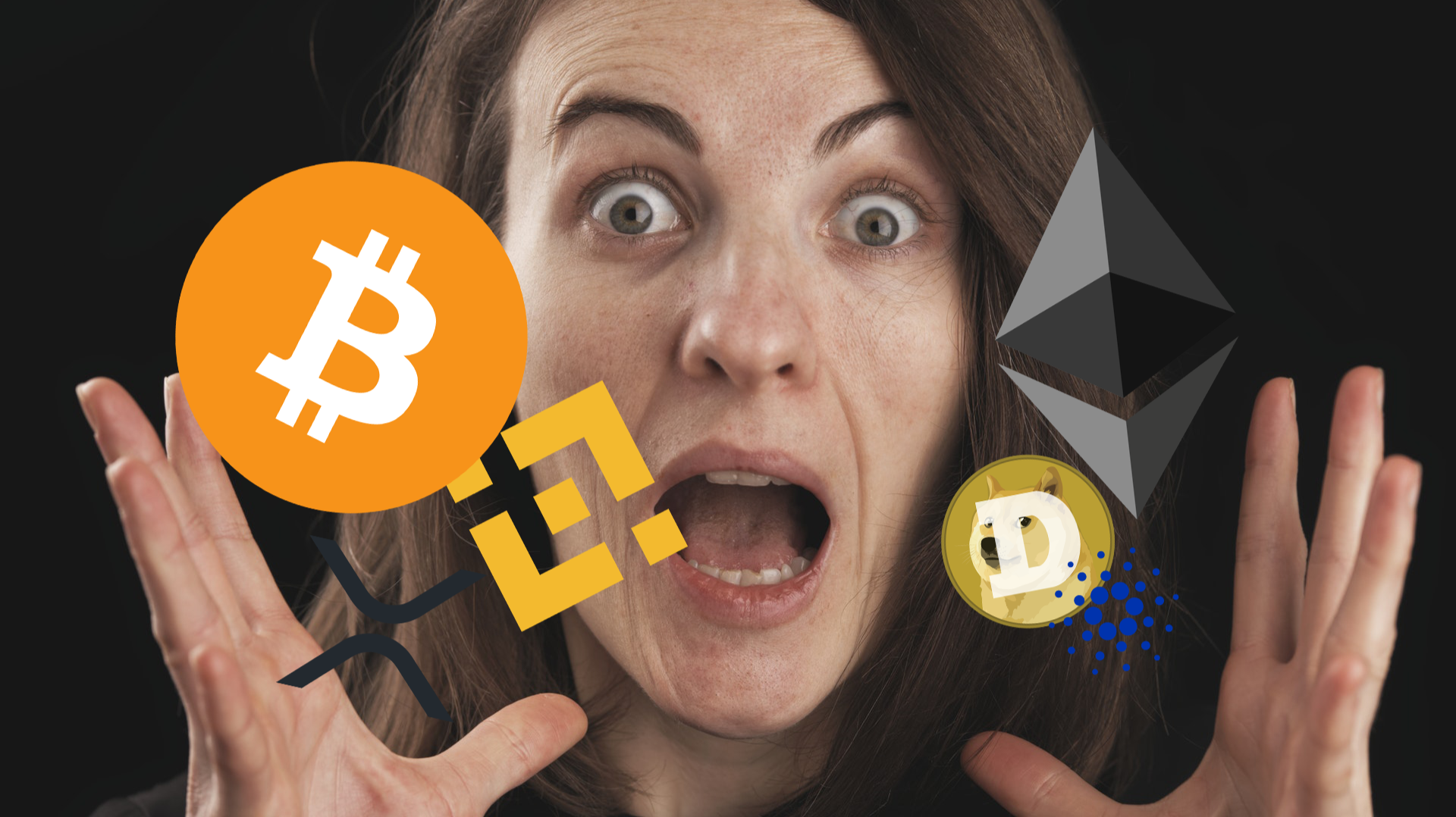 Crypto Market Completely Crashes With Drops Over 20% - Here's Why

The crypto market, appearing to recover over the past few days from a major crash linked to notorious crypto influencer Elon Musk, has utterly crashed even further, breaking month record losses.

Whenever a crypto crash occurs, the best indicator of the situation is with Bitcoin (BTC). It has the highest dominance of the market and thus has the highest influence on the market's trends to provide insights into the general market trends. However, it is important to note that the dominance of BTC has dropped considerably over the past few weeks, sitting currently just above 40%. Analysing BTC will analyse the general market trend, so it shall be done briefly in scopes of the past day, month and year, as provided by TradingView on the Binance exchange pair BTC/USDT.

When zooming out to the 1-year scale, the current crash instantly becomes noticeable. It is a solid line straight down, which would be disheartening to many looking for BTC to recover from what has already been a fatal crash. Through the graph, there does not appear to be any drop matching the recent one, the closest being in April, though it is about half the length of the current one. With the drop in April, it went from over $60k to a little under $50k - about a 20% drop - before quickly recovering, though some distance from its ATH (All-Time Highest) it achieved from its April run. This drop ran for about one week. In the current crash, it has also been about a week, so if BTC is following the trend pattern, a recovering should be happening soon, presumably within the next few days. 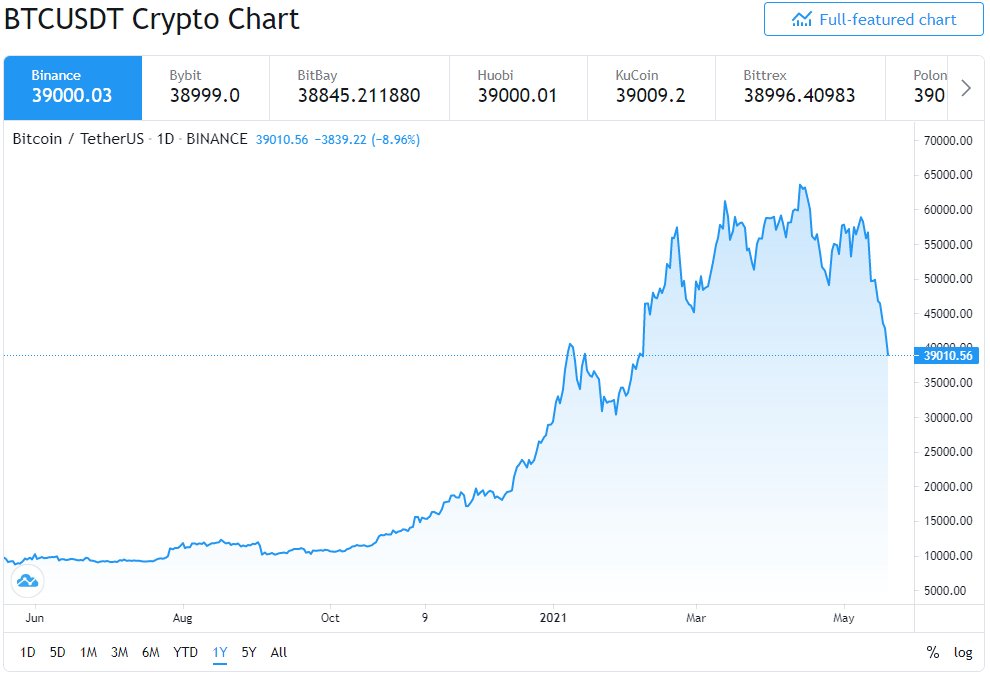 Going into 1 month, the crash becomes much more tragic. From the beginning of the graph, there is a decent drop that quickly recovers in a few days, then sitting at a stable price. When the graph comes to the last quarter area, it just goes chaotic, throwing all stability away to plunge ever downwards. There are some small recoveries along the way, though the drop outweighs the gains to sink deeper into the darkness. 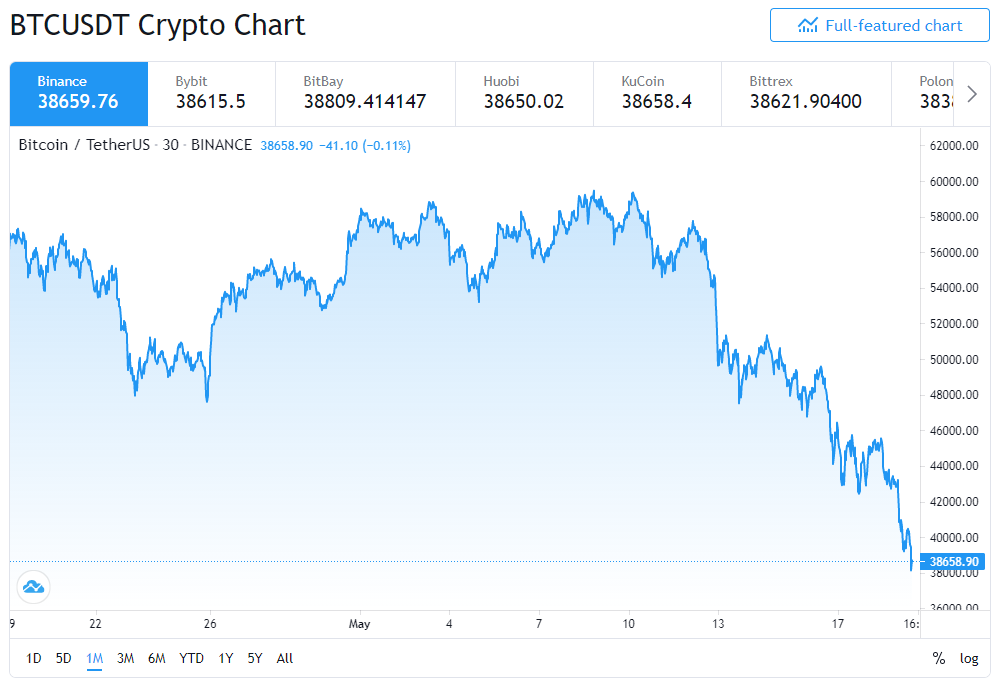 On a 1 day scale, the crash of BTC appears to be stabilising. There is a drop over the first hours, but after that, BTC appears to have hit a resistance point. There is one instance, occurring a few hours ago, where BTC dumped quickly, though it quickly recovered to its original state. This quick dump and pump suggest that BTC is at a strong resistance point, likely to stay here to then recover upwards, coming out towards the light. However, it is still important to note that a stronger dump is still possible. 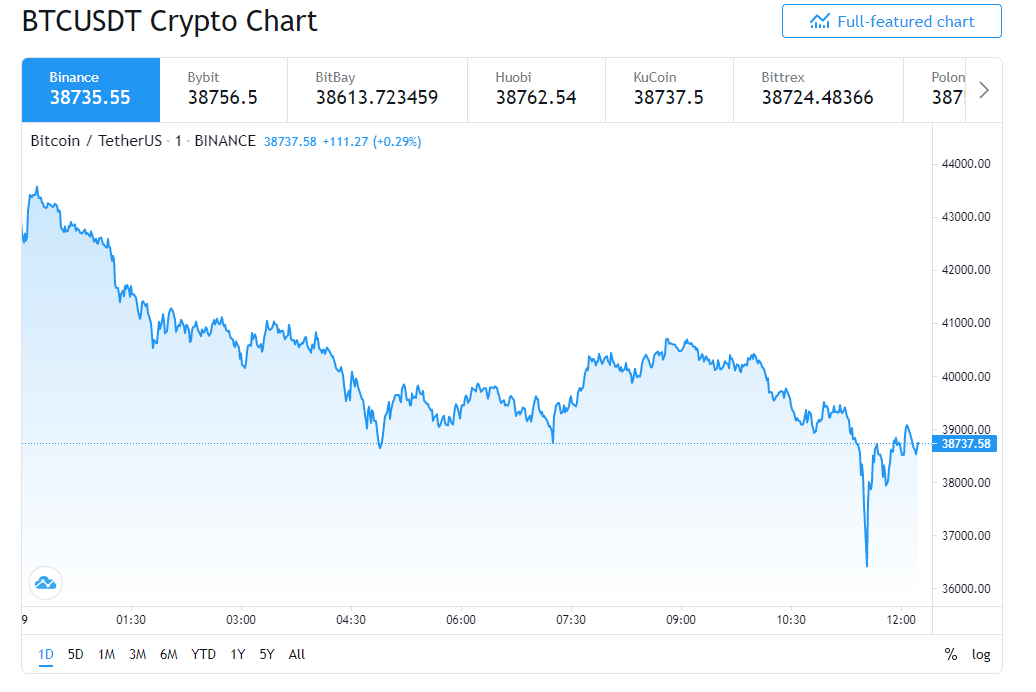 As an interesting note, BTC has not reached under $40,000 for months. When looking at the 6 month scale and following the dotted line of the price, the last time the price was what it was is presented. This is at the start of February - around the 7th - which is more than 3 months. That is how big this crash is. 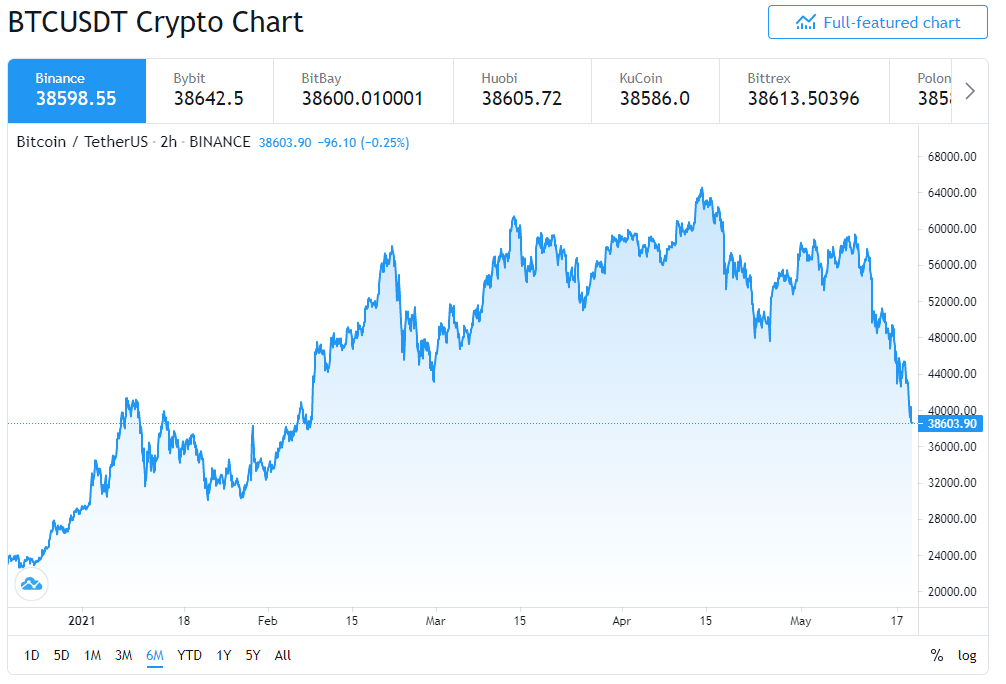 The current statistics of BTC are as follows:

The biggest reason for the market crash is most likely FUDers. FUDers are those who have FUD (Fear Uncertainty Doubt), which is then self-explanatory. Essentially the previous crash sparked arguably by Elon Musk has made another crash from the mass sell-out of crypto holders, seeking to take out their crypto before it gets worse. Some may also look at buying the dips, which is where to price hits quite low and looks to go up, and this is possibly why the dips recover quickly to then crash further done: people are buying for the dips and rises.

Another possible reason, though this is uncertain, is the introduction of new regulations regarding crypto for some countries. There has been news on regulation considerations for crypto in Australia and India (articles Further Reading), which could have played a part in the market's crash. EDIT: China is also another country which needs to be mentioned, though I missed it (thanks to Ngrd1!). With China, they have placed a new crypto ban, which obviously is a big impact, a lot of the crypto in the world being based there.

Overall, the main reason for the market's crash is FUD, sparked by the previous crash from Elon Musk, and possibly the introduction of new regulations on crypto. There are of course other reasons that are missed, but these two appear to be significant in reasoning the market crash.