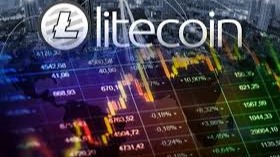 On Sunday the bulls increased the upward pressure, however the profit taking was practically immediate and brought the price back to the opening values, forming a gravestone. On the other hand, the price did not break the support, at least for now, and litecoin moved sideways throughout the week. Today we are witnessing a new upward pressure, it remains to be seen if the bulls will be able to give continuity to their action or if instead even today's candle will be dried up by profit taking.

BTC / LTC let's get ready for the blood bath

The candle of the month opened abundantly below the pivot point and, first of all, went to test the S1; hard to believe that this support will hold up, easier instead to hypothesize that it is broken and that there is at least a test of the S2, if not also of the S3, within this month. Looking at the weekly chart, the first thing we notice is that litecoin has scored a new low lower than that reached at the end of August, consequently any increase should be understood as a trivial retracement waiting for the bears to push the price even further bass. The 1D chart, however, seems to suggest that there is a good chance of a rebound up to 0.006BTC, but apart from the fact that the game does not seem to be worth the candle, moving on 4H time frame we immediately notice that a triangle has formed bearish and that the current price of 0.00566BTC led the quotes to test resistance. The most likely scenario, therefore, is that the bulls will be pushed back and the price will go back down, continuing to move inside the triangle until it breaks the base going to mark a new low.

Currently we are just waiting for litecoin to break the support in the 0.0055BTC zone to see if the new minimum that will be touched will coincide with an inversion signal or not; litecoin is definitely a currency to keep an eye on, also because it has always moved with a certain regularity and the times seem to be ripe for a reversal, although there is still no trace on the graphs. I think that between January and February this coin will probably come back good to buy, but for now it's better to be careful and let the bears play their game.

Please note: this post is not intended to provide in any way financial advice relating to how to invest your money but it is purely educational