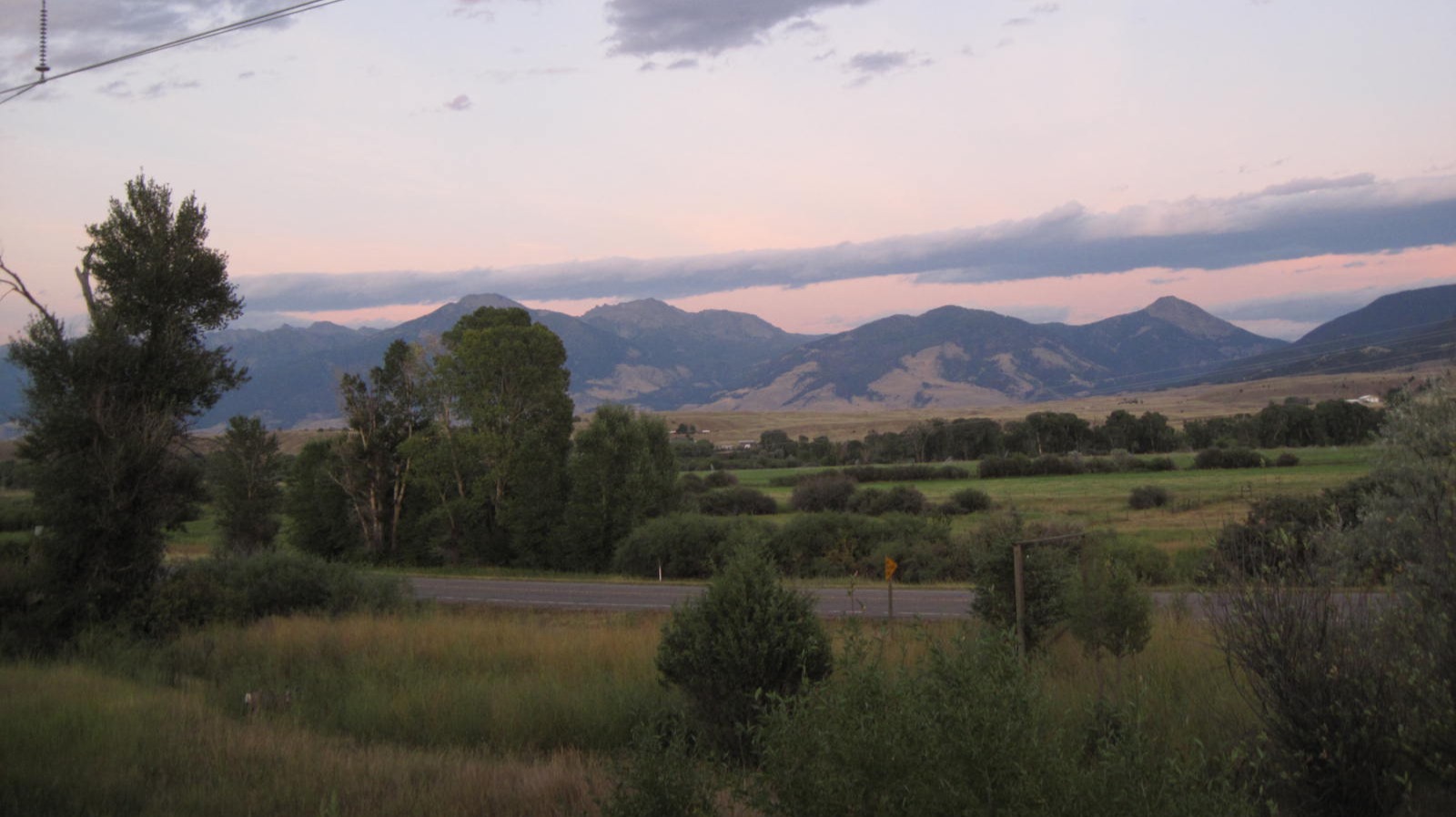 The Going, Beyond Nature

Went to town yesterday. Bought a shovel and a bow saw. Was feelin’ kinda naked without them. (My derriere’s still showin’ for a pick ax.) ‘Man in Montana without a shovel and bow saw’s just courtin’ future trouble. On the way, thought a lot about the Indians used to live and roam this valley horseback. Then, all the horses powering my exploring Ford condensed to THAT of the One spunky pony carrying me swiftly through the valley-rimming snow capped ranges. Those whitened Elders stood their snowy ground as I skidded by at 65.

I figured the Indians lived here unimpressed by those mountains like they do me. Their hulky masses weren’t items to them. They just fanned out from their lodging in those naturally wild hearts. Like another kind of torso-limb way out away from the ones gripping and guiding their pony. Their plating-on familiarity sealed them same; same as the flowing Yellowstone and their fellow herding creatures.

So much striving all around. Surviving just like them. The horseback roamers must have drawn comfort from the self-satisfied, never-not-grazing deer, bighorn sheep, elk, antelope, even the scurrying jack rabbits, and mice, along with the lofting birds, which gift the landed with notions of skyway freedom. The snows and windy, below-zero fangs clutching at their body warmth were not “endured.” No, they were just another kind of doinwhatchagottado.

Elementals surviving the elements complemented their more inwardly potentiated, Self-organizing cohorts. BEING, corralled in choiring nature, suffused nature’s players, All hosted divine Being striving through them. Yet, the human denizens stood out. Fiery special wisdom somehow found place in those outright Ones surveying their vast, Spirit-questing dominion.

Time’s passage packed in and uncovered Great Spirit’s own longing to know and be known. Life’s why centered a rounded vision bounded with exigency, unbounded with zeitgeist’s yearning soul.

Even as Life’s oft-harsh cascade sets sentience to revere and honor strength, Life’s denizens, each one, grasps their rightful, natural place. All creatures, including a significant percentage of humans (however loath they may be to admit it) take and defend whatever their strength allows. Such humans, not yet wised up to the Golden Rule, aren’t necessarily mean. They just unconsciously engage and enforce natural order.

I swab bread with leftover oil and break it. I squeeze it into pellets and scatter those upon my lawn for the magpie family who has wintered here with me. Their strength and inner fortitude awes me. They brave snow and below-zero cold, scoured by high winds, which they skillfully fly about in, undaunted. They bestow upon me a sort of satisfied, gratified ongoingness, which I derive from my ability to help them a little with my bread. Even so, my Golden Rule sensibilities are offended as I watch the stronger ones push the weaker aside to hog a morsel. I try to avoid that offense by scattering the bread widely, so that they will not be able to fight over it. Even so, sometimes a bigger maggie will push over a weaker one to steal its piece, even though there are many other wonderful pieces all around them. Asserting strength seems to be more important to magpies than appeasing hunger. I often feel impelled to deliver a Reaganesque “peace through strength” lecture to them, but I can see that all they are built to understand is i-me-mine through strength. I supposed that assertive power is what keeps nature clean and pure. Whatever cannot self-sustain is discarded to Shiva’s cleanup crew to remove.

On the other hand, Golden-Rule attuned humans are capable of sacrifice. Living in and driven by nature, most all still retain its “i-me-mine through strength” proclivity. “Follow the money” greed, power playing shenanigans, war; they all still plague us. Nevertheless, divine Love’s interlacings seem to by gathering strength of a different kind. That difference has always been present, but now it’s time for it to become preponderant. We need to grow beyond the way of the everyday Montana Indian, more or less one with nature’s Great Spirit. Our calling now is to be the medicine man, the tribe’s Great Mother, the shaman standing at the Gate.

In Aquarius, it’s no longer good (God) enough to simply be one with nature and its strength asserting, self-justifying ways. The One’s Real estate is coming in for a landing. So, pave a hearty runway for it. Make your way straight like a taxi signalman to guide your Real Selfhood to its designated berth where I AM. Eschew your phantom wimp. Assert your Peace through strength. Let those who choose to fight like the birds wrangle over that one particular bread particle, while choosing to ignore that they are surrounded by much else of Life’s abundance. Let the birds learn their own strength-demanding lessons while you learn your strength-revealing divine embrace.

So trade in your natural, human-longevity instincts for the out-of-this-world, humanly ascending instincts of your big-sky-Montana, great-horizons landed flight.