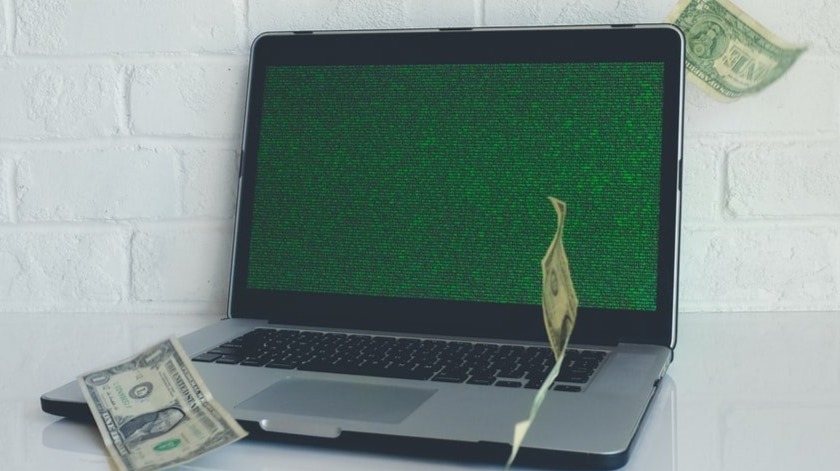 It’s been a month since I published my last Play2Earn summary. Life has been busy for me and Cryptoland suddenly going crazy with a still ongoing bull-run and projects like Alien Worlds exploding in market cap didn’t exactly help to keep track of everything and do my daily tasks. I still managed to complete most of my activities, though, but time for creating content was scarce. Now that I have a spare moment, let us review what happened over the last ~30 days.

There has been no way to escape Alien Worlds over the course of these past weeks. After the announcement of its Trillium (TLM) token to be listed on Binance, the project exploded. What used to be a niche project in its early Alpha stage (which it still is btw) became the #1 trending dapp with the token rising in value from a fraction of cents to 0.50 USD. The run on TLM even broke the Wax Cloud Wallet which suddenly was at the limits of its capacity and had to introduce Captchas in several places to deal with botting. To my surprise this level is still not only holding but further increased to 0.80 USD as of the time of writing!

As somebody who was involved in the game ‘before it was cool’, it was a good decision to always only sell half of my TLM (when it was still worth scraps) for WAX that I needed to fund my RAM. I was always hoping that there would be a surprise airdrop or something to early holders and so I kept the other half staked on planet Neri. This resulted in an accumulated stack of 900 TLM which I immediately sold for 450 USD in WAX as soon as the markets opened.

After burning a lot of money with failed crypto projects and exit scams in 2017/18 it felt great to get back 500 USD (I also sold some NFTs) from a project in which I didn’t invest a single Cent or Satoshi!

While still an underdog game, Rising Star is making rapid progress, delivering one update after the other. Over these past weeks we have seen the release of Production Crafting, Music NFTs and STARBIT staking, new Runner cards that finish missions for you instantly and an entirely new game mode Music Promoter with a new game token called STARPRO.

I have been super active in this game and started a new mission from my mobile as often as possible. All Starbits I earn from playing are re-invested in packs and I finally got lucky to unpack my first Epic vehicle.

The Trike gave me the fan boost I needed and now for the first time, I am not limited by the number of fans anymore but can do every mission accessible with my current level 50 account.

Neon District is the second of the two games I am grinding hard from my mobile. I managed to complete 2-3 delivery shifts per day and was thus able to buy a considerable amount of gear. I got lucky unboxing and added three super rare items to my collection.

My collection of Neon District NFTs on the Matic network has now exceeded 50 pieces and I am starting to get duplicates from the crates I am buying. These I listed on OpenSea and was surprised to find takers for my orders within 1-3 days every time. There seems to be a thriving community of collectors for this game already. I listed my commons for 0.0001 ETH and my uncommons for 0.0004 ETH. This was slightly below market price and sold really quick,

I guess it’s possible to make even more out of these trades. Personally, I think 0.0001 ETH is a good price for a common NFT, considering most common Splinterlands cards, that also come in packs of five, only fetch a tenth of that.

Lost Relics greatly contributed to me not having time to write any new posts. After initial troubles with the patch, the Easter event was going on for two weeks. During this time, you could collect Golden Eggs from dungeons and either open them for a (very, very, very tiny) chance of receiving a special blockchain item, or sell them for insane prices at the in-game marketplace for gold. A single egg would fetch 1k gold coins at the peak of the event. Collecting 6-7 of these in an hour was easy and that would already give you enough gold to upgrade to premium membership for a day.

Even with the little time I had for playing, I managed to grind enough gold for 4 one-day premium passes (pendants), 1 seven-day pass and even 1 thirty-day pass. I consumed two of the one-day passes for easier grinding during the event and have the rest sitting neatly in my stash. 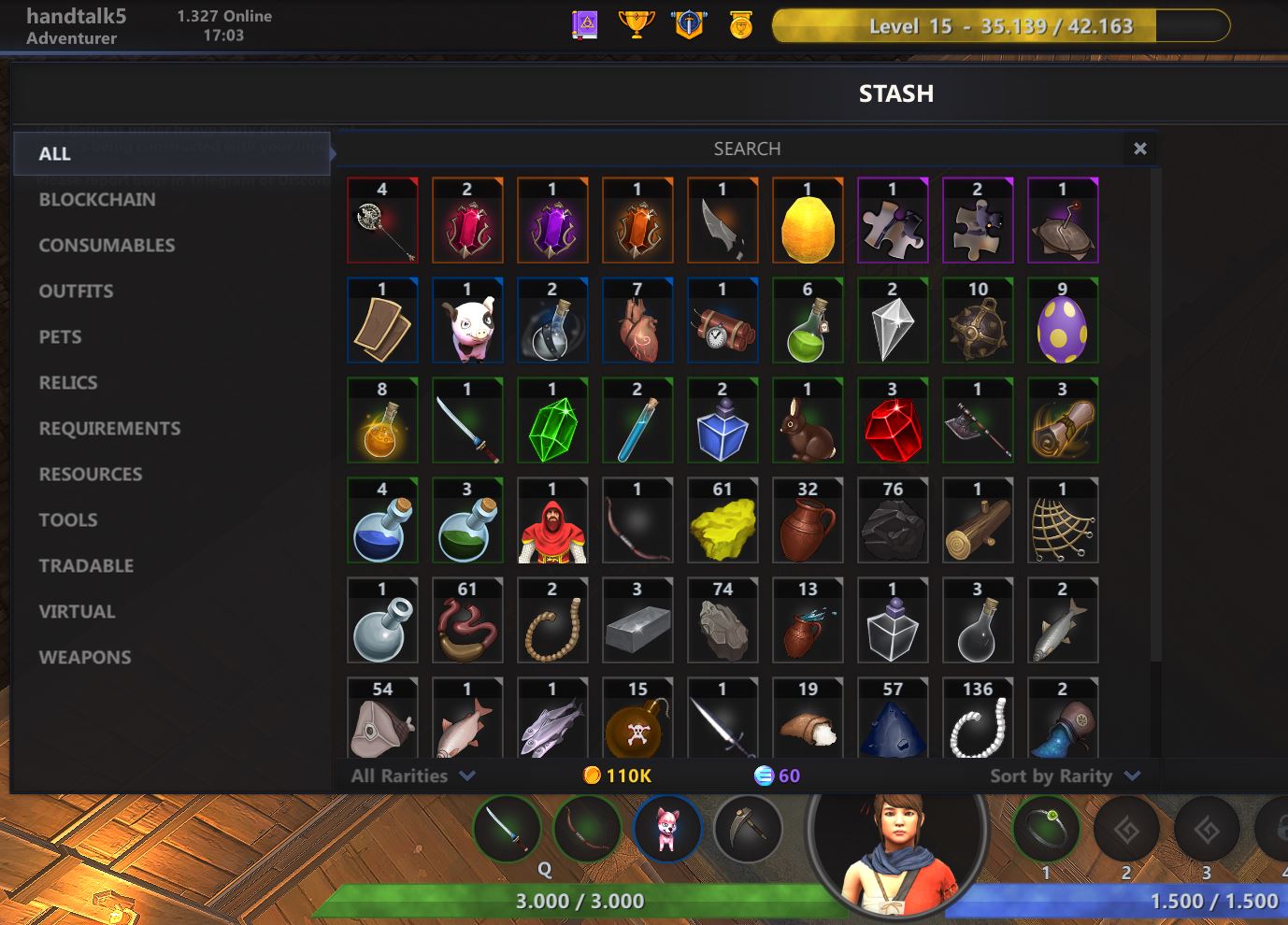 Even though I opened several dozen eggs myself (no luck…) I still had an extra 30k gold left over that I will save for future needs.

The game’s developer delayed the launch of the integration with the Ethereum scaling solution JumpNet. As some items have already been minted on the main net, he didn’t want things to get messy with the newer items being minted on JumpNet and thus having players to understand which was on which. The solution he came up with features an in-game marketplace for blockchain items, so that these do not have to be transferred out of the game in the first place.

While I get the idea, as this makes things easier to understand and handle, I dislike the fact that what is supposed to be decentralized storage of assets in wallets solely owned by the player, will now be mere in-game items with most of them not being minted and the marketplace also being controlled by the dev.

Anyways, the game is still in Alpha stage and as a matter of fact it just turned from open Alpha to closed Alpha. So, if you don’t have an account yet, you’ll have to wait for further updates. At the moment, it is also no possible (realistically) to earn any blockchain items by playing as the first edition is out-of-print, but new ones are expected to start dropping in about three weeks. I will be needing my premium pendants then, to get as many from the dungeons as possible.

Not much to say about Splinterlands, unless that this game is still my number one cash cow. I make more crypto from Splinterlands than from all other blockchain games and blogging combined.

I have been more serious about re-investing these past weeks and added several BCX of Owster Rotwell, Mother Khala and War Chaang to my possession. I also bought the remaining 69 BCX of Rusty Android that I was missing to max out that card and upgraded it to level 10. I expect the Android to rise greatly in price in the future, either because it could be a super good card to have in the upcoming land expansion, or simply as a meme collectors’ card (DOGE showed us what’s possible). 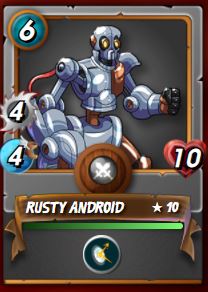 After a long draught with Legendaries, I was almost showered with them towards the end of the last season. Most of them were Spirit Druids, but even these sell for considerable prices currently. 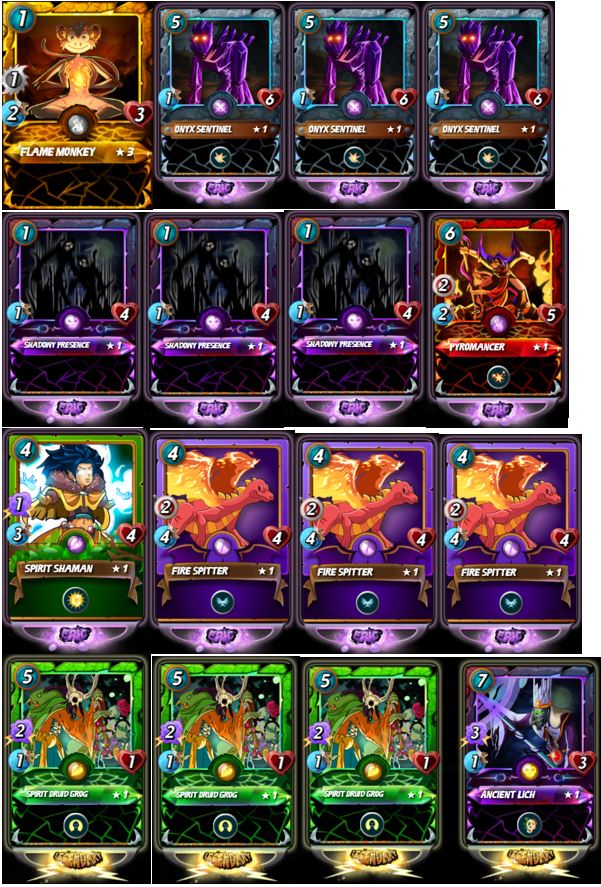