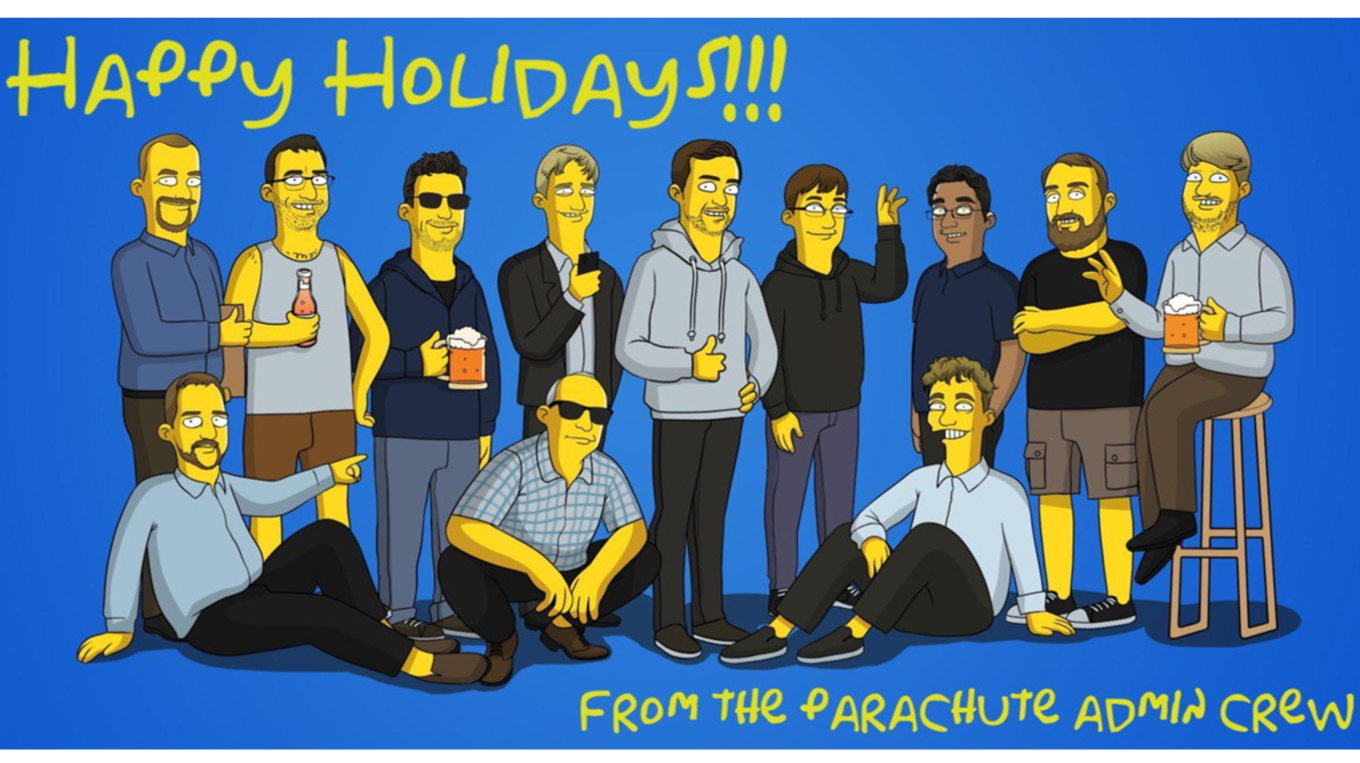 Richi hosted a movie trivia in TTR for a 25k $PAR prize pool. While going through the ParJar stats this week, Cap found that FlareofFlame is in the clear lead at tipping with 33k tips so far. Whoa! The College Football Bowl Season kicked off this week with a 100k $PAR pool and 21 participants. Best of Luck! This week's creative #donkeycronicles prompt by Jason was based on Doc Vic's latest episode of #parachutetwistedhospital: "Draw this story in either a single picture or a comic book style" and win some cool $PAR. Neat! Jason also hosted 3 more prompts for Christmas: draw an unorthodox Christmas scene (#donkeychristmas), share your crazy Christmas traditions (#crazychristmas) and send a photo of your holiday decorations (#happyholidays). Remember the recent Parachute World Map survey? Here are the results: 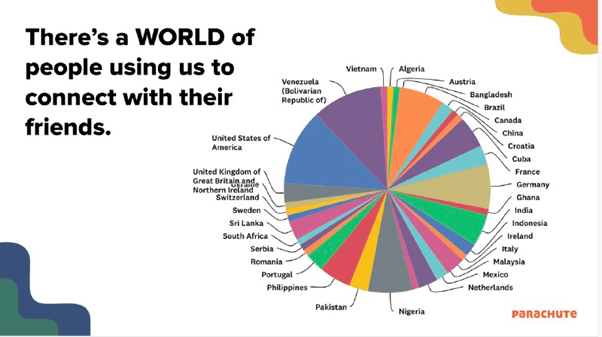 So cool to see Parachuters distributed across the globe

Andy put up a riddle for Parachuters for 50k $PAR: "Today starts my Half-Adam Sandler. 25000 PAR + (25000 from Jason) to first person to get the reference. Clue : Tis the season, think theaters, animation". Travis cracked this one. The answer is 4 days of Christmas. Derived from “8 crazy nights”. Thank you for the shoutout Rogel. And congrats on the win! This week’s Parena saw Nico’s Anteater beat Jimpanze’s Unicorn in the finale to take home a cool 25k $PAR prize. Several new assets were added to ParJar this week including $CALL. Great intro video too. Awesome feature on Yahoo Finance as well. Plus, the TTR crew picked up a project on the decline and are trying something interesting to see if they can bring it back from hibernation - $DYT. It was listed on ParJar as well. Welcome to the fam! In this week’s #FPL update by LordHades, we continue to have LH, NovelCloud and Alexis in the lead. For a change, Alexis hosted a Champions League wager in TTR. Guess Doc Vic needs a break sometimes to run the ParachuteWarZone. The #wholesomewed task for this week involved talking about presents we gave or received during the holidays.

The Week 51 aXpire recap video by Joakim can be seen here. Like clockwork, the weekly 20k $AXPR burn went ahead as usual. This was the last burn event for 2019. Two great article published by the crew this week covered the topics of accurate legal billing (and how Bilr helps) and expense management by fund administrators (and how Resolvr fits in). Koinsquare co-founder Tiziano Tridico featured 2gether and its card in his latest video for his Italian fans. In this week’s XIO Discussions (that included a ton of #XIOSocial ones too), Citizens talked about democratized startup recruitment, Citizen AMAs, newly discovered blockchain startups and the Reserve Protocol project. Engaged Citizens can find themselves featured on the updated XSI Leaderboard. Click here for an early sneak peek into the automated portal under development. Uniswap fans will be thrilled. The XLP has now crossed 30k USD in liquidity. Sweet! ETHOS’ Voyager app will now have interest earning on $ETH, $LTC and $BCH from next week. Switch-backed McAfeeSwap was released this week. It is a DEX aggregator that supports automated swaps using best rates. Some of the liquidity sources for McAfeeSwap include Bancor and Uniswap. Blockonomi released a featured article explaining XAR Network, the first mainnet based on Fantom. Fantom announced a partnership with COTI to work on a payment solution for Fantom-based networks and to make CSDTs (collateralised stable debt tokens) usable. Click here for an ELI5 on CSDTs. Michael (Chen) made a video to explain how to swap BEP2 $FTM to XAR Network $FTM. And another one on minting CSDTs and staking on the XAR Network. The Opera Mainnet will be launching next week. Michael (Kong) shared the Fantom journey and what it took to get this far. If you haven’t read up on Opera yet, you can have a look here. Michael (Chen) wrote a bit about the Fantom Community Policy which shares a lot of commonalities with the Parachute ethos. 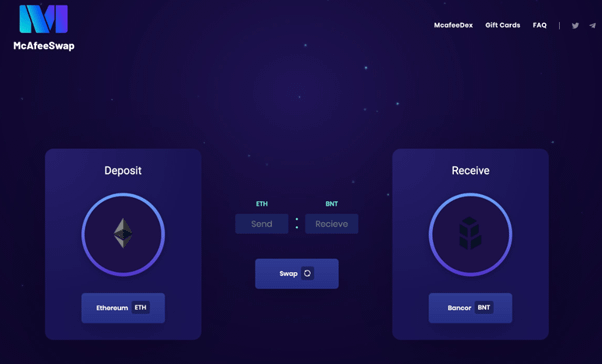 Switch fans will find McAfeeSwap uber simple to use

Payment processing platform Remroll added SelfKey’s $KEY token as a payment option. If you missed Constellation CEO Ben Jorgensen’s State of the Union last week, you can watch it here again. Plus, a quick write-up on it. A compendium of all resources for the $DAG token swap was also published. The Daily Chain released a detailed project introduction article. Congrats on making it to TradingView’s top performing cryptos for 2019 list. Enjin-based Multiverse Guild MvB joined Arena Match this week to offer their ENJoker and Bottle of Enchanted powers as perks on the AMGO gaming platform. Pynk Co-Founder Mark Little was interviewed by KAE to talk about the project and on fintech in general. Harmony hosted an AMA with P2P lending platform Constant this week. As shared in the last update, $ONE is now natively supported on Trust. The crew invited project followers to share community-problems that need resolution. Have you checked Harmony’s 2019 State of DeFi report built in collaboration with Wave Financial? You can read it here. In more Intellishare giveaways this week, the crew hosted a Christmas Wish contest. The winners of last week’s giveaway were announced along with the correct answers. Jobchain’s $JOB token was listed on DAppPocket Wallet and exchanges like KCoin Pro, Birake, Bitfare and Coinkeeper this week. GET Protocol CEO Maarten Bloemers shared a list of GET’s achievements in 2019 through a tweet thread.

As part of Uptrennd’s 24 Days of Celebration Finale week activities, the crew hosted a 12 hour trivia, game contest, level up giveaway and a 3 Round 10k $1UP giveaway contest. Whew! Congratulations on getting to 200k+ posts. The platform is now available on CryptoCanary’s Discover feed. The latest District0x Weekly Update and Dev Update can be seen here and here respectively. These contain news such as moving Memefactory to Infura, District Registry testing etc. The team appeared for an AMA with Messari. Check out the transcript here. The Hydro team, as part of their work, are one of the keenest observers of the fintech space. It would be interesting to find out which of their fintech predictions for 2020 come true. DApp developers have a great resource repository available in the form of the various documentations listed on the Hydro dApp store. A detailed feature on Silent Notary’s Integrated Distributed Ledger (IDL) platform was published on CryptoHuff this week. The first IEO is scheduled for the first week of next month. Sentivate founder Thomas Marchi sat down for several podcasts this week to talk on exchanges & regulations, downsides of Web 3.0, project updates and exchange updates. If you’re not on OST’s Pepo app yet, may be Crypto Canary founder Kevin Ting or Week in Ethereum News author Evan Van Ness could convince you to come over. MetaMorphPro founder Daniel Lew published a 2020 roadmap for the platform.

And with that, it’s a wrap. See you again with the next weekly update. Bye!

P.S. The cover pic for this article carries a message from Captain Parachute: Even though we’re all away…we digitally got together for a very special Parachute holiday photo