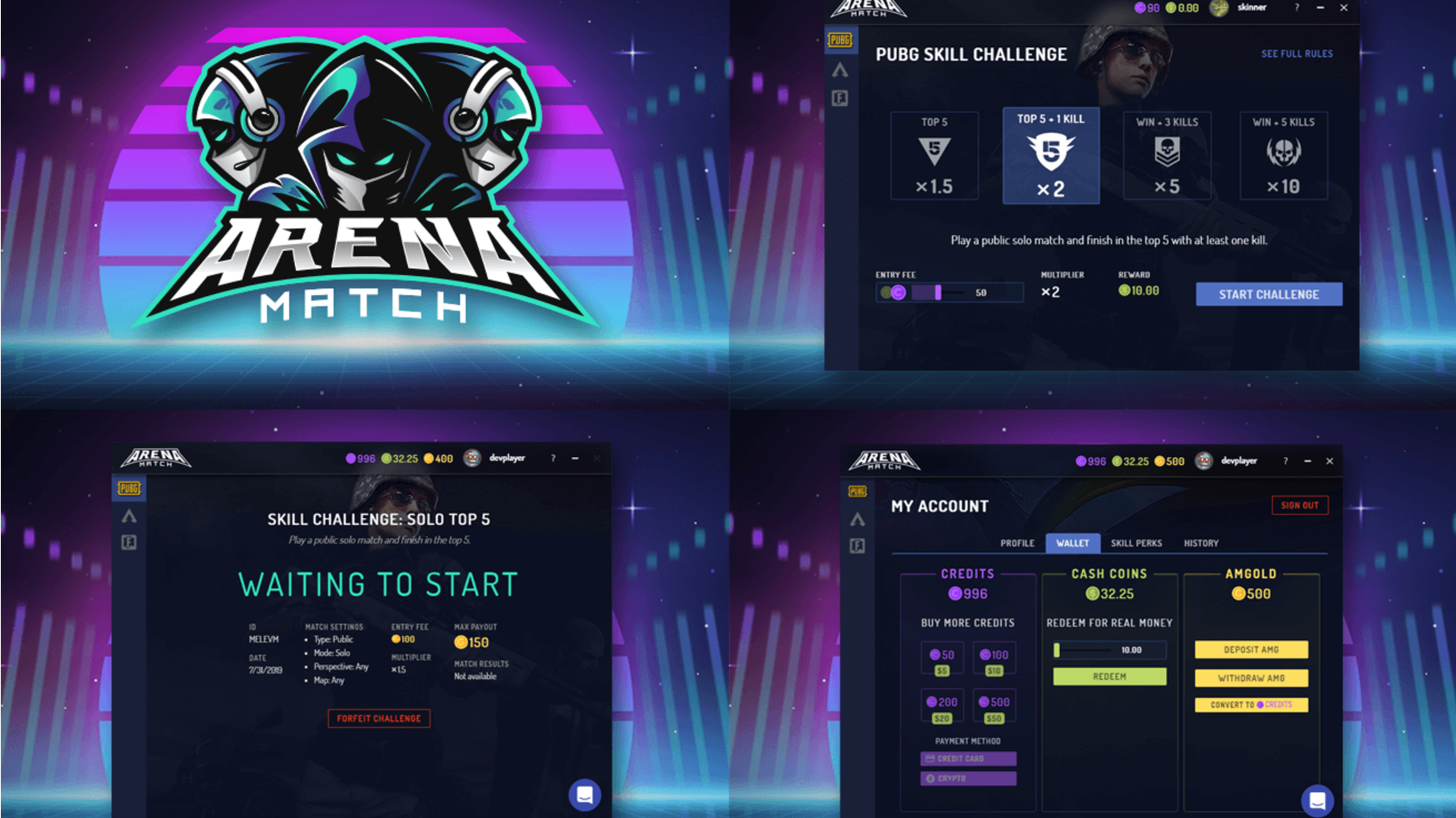 In a first for ParJar, Arena Match (whose token $AMGO was listed last week) conducted its airdrop distribution through ParJar on Telegram. So if you signed up for the airdrop, you will find your ParJar account already prefilled with 50 $AMGO tokens. A ton of new users got $AMGO dropped to their ParJar wallets. That was quick! Doc Victor hosted a medical quiz in TTR this week. 15 questions, 24k $PAR in prizes. Boom! The PARroundings photo contest started by Luis last week in TTR saw some epic entries. Rika, Syndrome Error and Mery’s pics were adjudged winners. Check out the video compilation made by Sebastian and the top 7 entries. All of these are rad. Parachuters are everywhere. And so is $PAR! 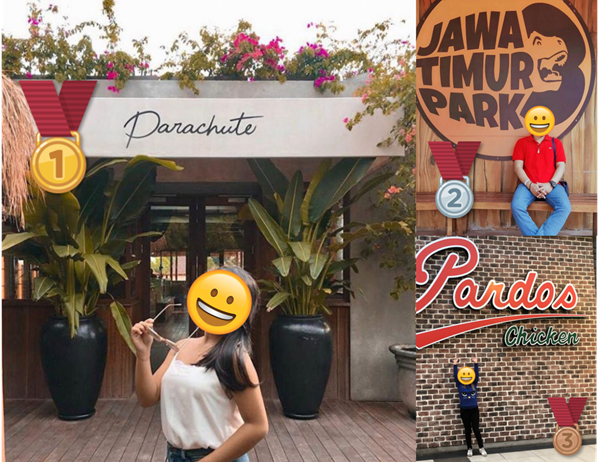 This week, GC started a Big Brother mini-contest and opened it up for everyone. BB fans who missed out on signing up for the contest back in June got their chance to get into the mini version. And don’t forget to keep brainstorming on the Parachute Partner Treasure Hunt started last week. Jordy (from Sentivate) shared that only one person had so far been able to receive the SNTVT puzzle piece. Crypto treasure worth USD 2,000 waiting to be unearthed. Go get it! Click here for all the starting branches of the treasure hunt. As Parachute continues to work on #cryptoforeveryone, the team unveiled ParJar to the Product Hunt community to “to start hooking up people with their first crypto”. Saweet! And thanks a million for the shoutout $BOMB Squad. You guys are gems. The #PAR4PAR contest entered stage 3. The stakes are higher than before. 150k $PAR to be won. Say what! 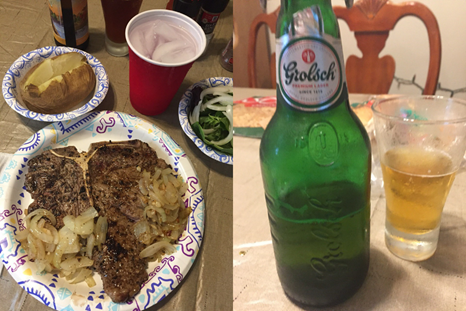 BOMBX will start a podcast featuring early stage blockchain startup founders. If you have an entrepreneur in mind whom you would like to be interviewed, let the team know. After creating the award winning BOMB artpiece in February, Corrosive Creations is back with another masterpiece. This time for BOMBX. Neat! In this week’s community discussions, Dash talks about XIO’s anti-ICO model (which could be a possible revenue stream for incubated startups). Feedback from the community suggested that this particular branding (anti-ICO) may not work going forward. But the concept seemed to stick. It is like a “zero-risk crowdfunding system”. Another topic of contention was what portion of native tokens should a team keep for themselves. We also got a quick preview into the timeline progress of XIO including a sneak peek into the roadmap (“XIO Atlas”; Big up to Prince Ulrich for an epic name). The $XIO ERC20:BEP2 bridge testnet trials have been successful. What remains is the application to list on Binance Dex for review by the Binance community. As announced last week, a BOMB Board has been set up which will be a "community-led strategic planning team dedicated to growing the BOMB project". 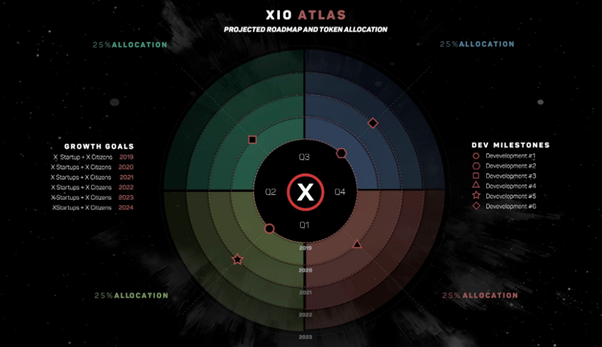 Rohit and my article for aXpire on how crypto payment platforms like PayBX compare to permissioned gateways was published. Week 37 recap video for aXpire and the cryptosphere in general can be watched here. Another episode of the Blockchain for Good video series was released this week as well. This episode featured The Pineapple Fund which was a philanthropic initiative by an anonymous benefactor that saw 5k+ $BTC given away to various charities in five months. Another 20k $AXPR burned in the latest weekly burn. 2gether, in partnership with IEB Spain, launched the first edition of a blockchain and tokenization based contest named Crypto Talent. The contest is open for students and professionals. Birdchain’s August update was released this week as well. Full release of the app (with the SMS feature) is pending for approval from app store. The OST team was in Tel Aviv this week to speak on the Pepo app and Ethereum scaling solutions. To see the slides and video from the presentation, click here and here respectively. OSTWatch is an independent $OST tracker built by community member Samuual which now shows recent token-related events as well. Devs building on the OST platform are also rewarded handsomely for their contribution to the project. So get BUIDLing! OST backed LGBT tokens now have 3k holders thanks to the Hornet app going into Phase II rollout. That is awesome! Remember CEO Jason’s tweet thread master class on session keys? Here’s an article that explains it in more detail. 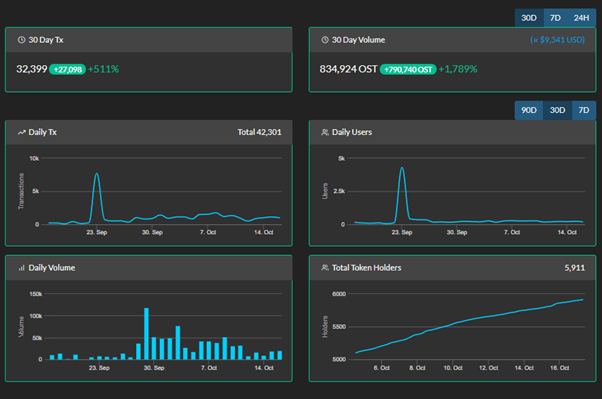 Snapshot of the OSTWatch Mainnet metrics

ETHOS tokens can now be deposited and withdrawn from the Voyager platform. Hope you took out time this week to check out the Memes contest in the Uptrennd Telegram. Lolarious memes and a ton of $1UPs given out. Remember we had shared in a past update that the platform is projected to hit a few milestones this month? Well, it happened as per expected timeline. Uptrennd got to 10k+ users and a 100k+ Alexa ranking this week. Congratulations! As mentioned in the last post, Hydro travelled to the FinnoSummit in Mexico City where Co-Founder Mike Kane was a speaker. Click here and here for pics from the event. Founder Matthew Kane was at the Oracle Open World this week and shared an overview on Open Banking. Want to use test out dApps in the Rinkeby Testnet using test Ethereum? Click here to know how. And, here’s a quick write-up from the Hydro team on the best practices of dApp development. Did you know that former CEO of Sanrio (of Hello Kitty fame), Ray Rehito Hatoyama was a Constellation advisor? Here’s his full interview with Co-Founder Benjamin Jorgensen. The DAG community is always BUIDLing cool things around Constellation. For example, check out the early look below of the mainnet wallet being built by community member Vito. Plus, a quick recap of last week at Constellation was published. The project also got into a media partnership with FomoHunt that will see, among other things, $DAG being integrated as a payment option on their platform.

Arena Match community voted to decide on which exchange to pursue for a listing. DDEX won the public vote. $AMGO deposits went live on Arena Match Beta version 0.5.0 this week. They announced a partnership with Space Misfits, the "world’s first Blockchain space MMO". Arena Match also won a public vote to get reviewed by the Uptrennd team for free. Woot woot! The revamped SwitchDex went live this week. To mark the occasion, Switch hosted a social media bounty for some cool $ESH. John McAfee is a long time supporter of the SwitchDex and talked about it in his interview with Dean Pappas. Catch up on the latest at Disctrict0x from the District Weekly and Dev Update – an explainer video for District Registry is being worked on, Ethlance front end is in finalisation stage etc. Silent Notary’s LAW token presale started this week. Plus, they hosted a referral bonus through their partner bot for 10k LAW tokens per referral. Details of the newest tokenomics of Mycro’s $MYO token came out this week. SelfKey got nominated for Disruptor Daily’s first ever Blockchain Identity Management Use Case Award. Neat! 20 new jurisdictions were added to the Bank Accounts Marketplace. In this week’s educational posts from the SelfKey, we learn about the history of crypto exchange hacks and how to prevent identity theft.

And with that, we close for this week at Parachuteverse. See you again soon with another update. Cheers!