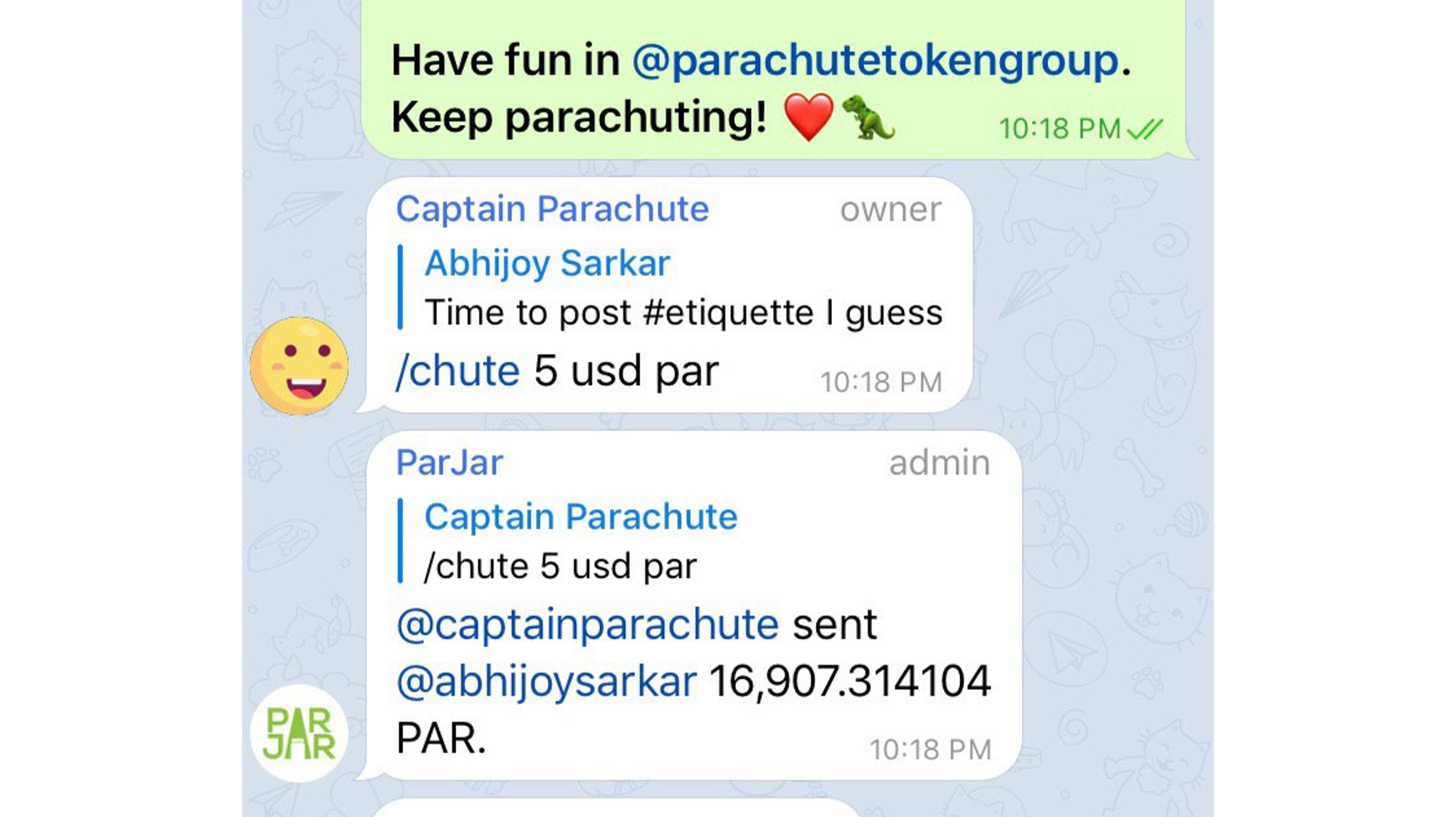 Sebastian hosted an NFT auction this week for five Enjin (ERC-1155) assets themed on the Parachute universe and designed by Jose. Check them out here! 5 lucky bidders are now proud owners of the these NFTs. Afful hosted a trivia in TTR for a 25k $PAR prize pool. Andy announced the final standings of the #bowlpickemchallenge with ShaQ (28 points and winning 60k $PAR), Andy (with 27 points and winning 30k $PAR) and Cryptodelphia (24 points and winning 10k $PAR) in top 3. CF_user’s Adventurous Alpaca took home the grand prize of 25k $PAR for winning this week’s Parena. This week Shawn also added a fun little command to ParJar. Now “/chute” will also act just like “/tip” as a homage to Parachute. Can you chute me some PAR bruh? Also, notice the slight changes in the ParJar messages? Nice, eh? Plus, a nice surprise to the Parachute community from Crypto Lawyer who featured TTR and ParJar in his latest video. Thank You and a Happy Lohri to you too! Thanks a mill u/lazymobile for sharing this with us. For Two-for-Tuesday this week, Gian got Parachuters to post videos from their favorite bands. A fun Tuesday ensued! Jason's #wholesomewed prompt for this week involved Parachuters sharing their dream job/hobby. 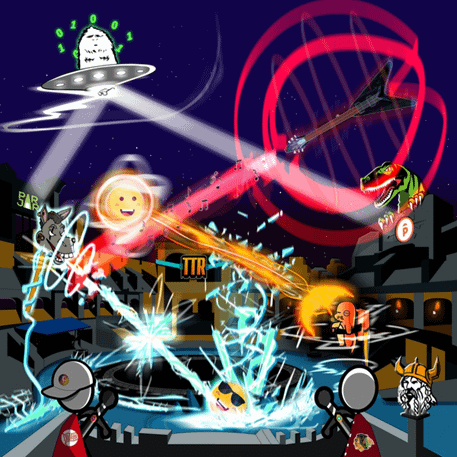 The PARverse ERC-1155 asset designed by Jose and minted by Sebastian. What a masterpiece!

aXpire CEO Gary Markham wrote about the Davids and Goliaths in the expense management software space and why “the biggest platforms are not always the best”. The latest weekly update from Joakim and the weekly 20k $AXPR burn can be seen here and here respectively. Congratulations to 2gether for being recognised as an Innovative SME by the Spanish Ministry of Science, Innovation, and Universities. 2gether’s cryptocurrency consumer analysis report was published on ZDNet this week. We will share more details on the research in the next update. CEO Ramon Ferraz talked about the 2019 journey for the project and what lies ahead in a recent podcast. Spanish speakers, have a listen. XIO announced the start of an $OPQ staking program to reward $OPQ holders with $XIO tokens. USD ~50k worth of OPQ were staked within days of the announcement. A similar staking program was announced for $1UP as well. Many of the XIO reward payouts (for portals, XSI, XLP and Insider) were released this week. In #XIOsocial discussions, Citizens talked about startup success factors, unique aspects of crypto that won’t age well and about projects they support that didn’t seem great at first glance. Click here to read up on how the Xord team helped build the BOMBX:XIO token swap bridge. Bounty0x has been working on a platform where influencers and creators can monetise their content. More details to be shared in future updates. 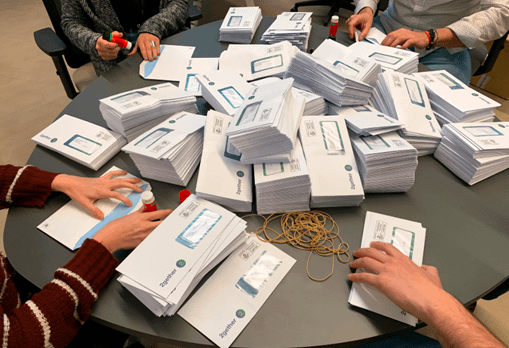 All hands on deck to get 2gether cards shipped on time

SelfKey crew released an article on the top jurisdictions for offshore wealth management. Congrats on making it to the list of 10 best blockchain dApps compiled by Computerworld. Constellation’s education initiative Stardust Collective launched a competition for creating an identity concept. 250k $DAG up for grabs. Damn! Beincrypto published a feature article on five blockchain projects to look out for in 2020. Constellation was selected as one of the five. Nice! The latest refurbished Pynk website was released this week. Big up on crossing the 11k mark on the investor waitlist. Harmony’s 2020 roadmap and all-hands vision were released this week. CEO Stephen Tse spoke about the 2020 goals though a live telecast. For the weekly roundup from the team, click here. In preparation of the upcoming swap, the Foundation’s $ONE coins were moved to new wallets. Got lost in all the Intellishare Christmas giveaways? Read this to catch up. For the latest $GET buyback and burn report, click here. Yup that’s almost 100k $GET burnt now. Noice! tehMoonwalkeR hosted an AMA with the GET Protocol crew. Last week we learnt that art installation SKALAR had partnered with GET for its next event. Read more about it here. The first Payday of Global Crypto Alliance (where earned credits are converted to $CALL tokens) happened last week. Details of it were published this week. Payday happens once every month. The crew visited NYC to talk at Nasdaq which also turned out to be a great networking opportunity. COTI announced a partnership with Celsius to use COTI’s Trustchain system for DeFi applications on the Celsius platform. COTI also released a BEP2 payment infrastructure called BEP2Pay for Binance Chain-based projects. DoYourTip’s token swap details were released this week. Plus, a fun raffle was announced.

ETHOS’s parent company Voyager added three new stablecoins to its platform and will soon introduce interest earnings on these holdings. The news was covered on The Block and Coindesk as well. Switch-backed McAfeeDex has now launched 35 white labelled portals. Great going! Nearly 33% of all $FTM is now staked on the mainnet. Staking info can also be looked up on the newly launched Fantom Staker Info dApp. Benjamin Cowen’s Foundations of Fantom series saw its fourth edition release this week. YouTuber John Patrick Acquaviva reviewed Uptrennd in a detailed video this week. As Uptrennd 2.0 takes shape, the platform branched out to include non-crypto content as well. The community voted and decided upon Gaming, Tech and Personal Growth as the new non-crypto categories to be added. Click here for more updates. An Uptrennd Espanol community was added for Spanish Uptrenndians. The constant engagement helped the project getting to trending position on CryptoCanary. The District0x community voted to have an AMA for this week’s Dapp Digest. The latest District Weekly can be seen here. The Hydro dApp store was released on mainnet this week. Hydro’s Banking-as-a-Service (BaaS) report came out as well. Hydro Labs Marketing Director Lenny Mauricio travelled to the North American BTC Conference (#BTCMiami) to spread the word on Hydro. For other updates, click here. Silent Notary’s storage platform Ubikiri’s development updates were posted in a series of daily tweets (1, 2, 3, 4, 5, 6, 7). This will be a practice starting this week onwards to post daily dev updates. Round 1 of Traders Battle concluded and a new Round started. The $LAW IEO on ExMarkets was extended. Details of the offering were listed on the masternodes online (MNO) platform. Sentivate demystified the intricacies of cryptography and UDSP through tweet threads. The first version of the Mycro Hunter app was released this week.

And with that, it’s a wrap. See you again with another weekly update. Bye!

P.S. The cover pic for this article is a snapshot of the new ParJar command in action for the first time.