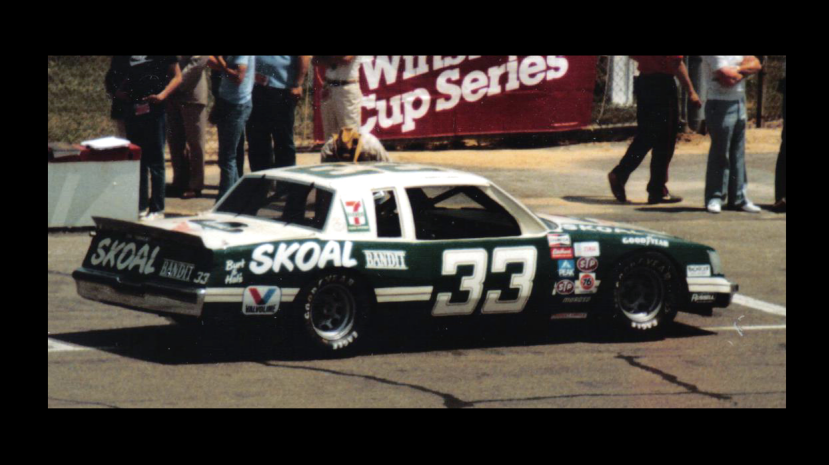 The Golden Age of NASCAR

When I was a kid, my brother, my dad, and I went to all the NASCAR races.  It was in the days when the only track that wasn't in the South was in Michigan.  Maybe that has never been the case, but in my mind it was.  Now, the tracks are everywhere:  Las Vegas, Miami, The Moon.  But at the time they were all in the South.  We'd make the roadtrip from Atlanta to wherever it was:  Talladega, Daytona, Darlington, wherever.  Sometimes we'd fly, but usually we'd drive.  We'd get a hotel room nearby, and head into the track on race day.  Buy a program, roam around the infield, looking at T-shirts and maybe buy a pin for our trucker hats.  Maybe walk around some of the cars.  Were they the cars that were about to be raced?  I didn't know, but they were cool.  Low, flat, fast-looking.  We'd stick our heads in through the windows and marvel over the stark, steel safety infrastructure and tiny steering wheels.

The din created by rednecks drinking cheap beer under clouds of exhaust and pulverized rubber created by loud cars is hard to beat.  The infield is a forest of Confederate flags and banners advertising alcohol, cigarettes, and car parts, waving in the hot metallic fumes that hurt your eyes in all the ways you like.  Among the waving banners you'd see lawn chairs on the roofs of RVs, where the hard, fun-loving Southern guys would sit drinking beer and watching the race with their wives wearing bikini tops.  Hot dogs, soda, gas fumes.  Burning rubber and hot metal.  The sound of radios and revving engines.  The rotten piss-trough in the men's room.  The strange smell of beer for the adults.  Cheap beer, beer water, in the days before "microbrews" and people caring about the difference between a lager and an IPA, when beer was just beer.  The mad roar of the engines.

There is nothing like the sound of dozens of race cars speeding by you while you're standing at the fence, inches from the track.  It's like a million huge mosquitoes, zipping by you in a flash.  And the sound of them idling and warming up their tires, following the pace car like a pack of lions follows a gazelle is even better.  Low, heavy, rumbling, it's impossible to describe.  It's the sound of carburetors, pistons, lungs.  The sound of angry dragons breathing fire.  And when they get going, man.  The music is hard to describe.  You have to be standing there, feeling the wind from the chase.

Stock-car racing is a cool sport.  It's not as cool as it used to be, in the golden heyday of Richard Petty, Harry Gant, Bill Elliott, Bobby Allison, Rusty Wallace...

In fact we saw Rusty Wallace race on the "Milwaukee Mile," when he was still a rookie.  I had an 8x10 of him stuck into my scrapbook.  It might have even been signed.  Maybe it was.  Maybe not.

We used to like going to go-kart tracks.  Was it Gatlinburg, or Pigeon Forge?

I remember coming back to my 8th-grade science class after spending the weekend at the Daytona 500.  The Daytona 500 takes place in February, and I went to school in Northern Illinois.  It isn't sunny or even remotely warm in Northern Illinois in February.  But I came back pink, pleasantly sunburned and with exhaust dirt tattooed into my skin.  I was a marvel to my pasty Yankee classmates.  It was an exotic thing to have done for the weekend, going to the Daytona 500.  It made me cool for at least a couple days.

We were at Talladega when Bobby Allison blew a tire, spun around backwards and went airborne into the fence separating the track from the crowd.  He spun around a few times and took about 100 feet of the fence with him.  Inches from the crowd.  I remember hearing the crash and turning to see the immediate aftermath; I was looking the other way when it actually happened.  It was one of those crashes that makes NASCAR re-think its safety protocol.  The world is always a lot more fun before bad things happen; one of the reasons the world isn't fun anymore is because so many bad things have happened, that there are more safety protocols in place now, than at any other time in history.  There are so many "crashes" in history to look back to, that we've bolted everything down in abject terror.  We've welded our lives into the safety seat of preventive motherly over-worry, to make sure nothing bad ever happens again.

It doesn't work.  Life is better when nobody wears seatbelts, or knows anything about beer.  Maybe after the next crash, which will happen in spite of all the safety protocols, we'll finally figure that out. 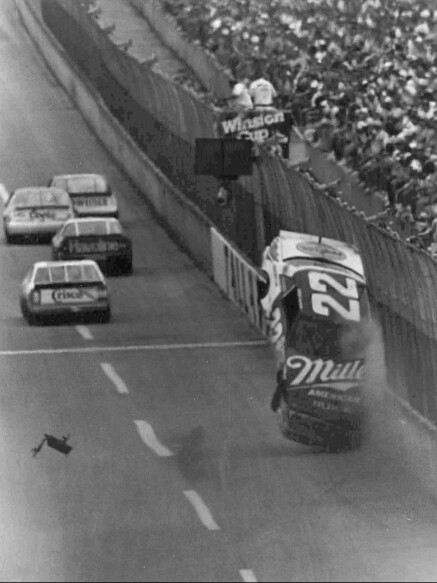 I never followed the sport after Jr. High, but the safety measures have become even more stringent in recent years.  My dad was a lifelong fan, and hasn't watched a NASCAR race in years.  He lost his taste for it, his patience for the nonsense.  I tried going back to it a few years ago, and was instantly bored by the oversafe Car of Tomorrow, and the hot-chick Crash Queen marketing ploy named Danica Patrick.  Who is from Northern Illinois, incidentally, and went to school very near to where I did.  A different district in the same county.

Hot chick, probably kills it in a Porsche 911 on the freeway, but not a NASCAR driver.  I can't imagine an old-school soul like Richard Petty competing against somebody who looks like a cheerleader.  It just isn't the same.  In a bad way.

Maybe it isn't the Car of Tomorrow or bad lady drivers that bother me.  The cars are going to change.  Always have, always will.  What bothers me, probably, is the painting of M&Ms on a race car, instead of the Miller Lite logo, or brand of motor oil or cigarettes.  It's possible I don't want to look at a car sponsored by an internet hosting company named after a weird-sounding sexual deviation.  Maybe I just don't want to watch a candy company jockeying for position with the Walmart car.  The corporate logos in racing used to have balls.  Cigarettes, alcohol, transmission fluid.  Now we get M&Ms and GoDaddy.  Harry Gant was my favorite driver back in the day, probably because his car was so cool.

I don't even like chewing tobacco.  Especially not in 8th grade.  But look at that car!  The guy on the hood is as cool as they come. 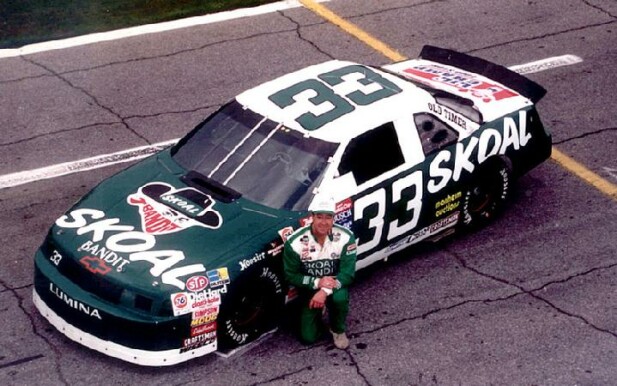 You can root for a cool-looking mascot without becoming interested in his carcinogenic product.  I never knew or cared what Skoal was, and wouldn't have been interested in it if I did.  If I had to choose a mascot for an addictive chemical, I'd probably choose the Skoal Bandit.  Maybe Spuds MacKenzie.  Here's Spuds MacKenzie drinking a beer with a hot chick at an air force base. 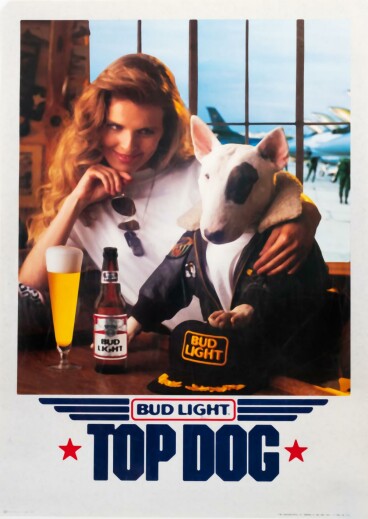 Be honest:  Why do you want to be him?  Because of the chick, or the jacket?

And Joe Camel might have been cool, but he was really, really ugly.  I know looking like Brad Pitt isn't the most important thing for chicks, but man.  Even the advertiser would rather focus on the bottom of his shoes: 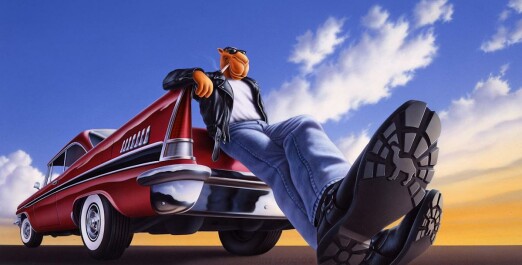 In Mexico and parts of Latin America, packs of cigarettes have photographs of people dying of lung cancer, printed in color on the box.  They'll print topless photos of somebody with stage 42 breast cancer, to prevent you from buying the product.  Entire panels of the box are printed in bright yellow, warning you in Portuguese of your slow, impending death.  Which is all probably more attractive than Joe Camel.  Whatever the case, the golden age of eating hot dogs and inhaling car fumes while watching rednecks drive 200mph in cars that look like packs of cigarettes is over.

Still, give me Joe Camel over these teeth by the guy from AC/DC any day. 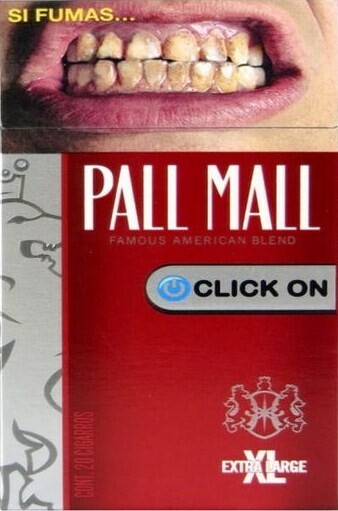 Horrific.  I'm still waiting for the DEATH JAB ADVERTISERS to catch up to the cigarette industry.  When we see images of magnetic people collapsing and having seizures on soccer fields while waiting in line for our free ice cream cone at Walmart, to warn us against taking it, I will be satisified.

But the golden age of NASCAR was great.  It was probably not the only golden age of NASCAR, but it was our golden age.  I have never been interested in sports, and wasn't entirely into it at the time.  Growing up in Northern Illinois, we were all into the '85 Bears, and the 90s Bulls were impossible to deny.  They were like ballet dancers playing basketball.  And we did go to the Indy 500 in 1986, which was pretty cool.  My dad preferred stock car racing to the open-wheel variety, and in fact I share the same preference.  But when we used to go to all the NASCAR races, all the ancient, badass tracks, I wasn't into it at the time.  I didn't hate it, but I wasn't into it.  I wasn't not into it.  But in hindsight, going to those races were some of the best memories of my life.