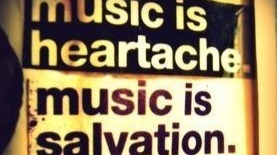 "Music became my refuge then my salvation."  Lena Horne

There's an early scene in American Hustle in which Amy Adams and Christian Bale are gushing about Duke Ellington.  Their characters share a great deal of enthusiasm about his music, and one of them says, "he saved my life," or "his music saved my life," something like that.  And it hit me:

It's because there isn't any music.  Decades of taking music for free has created an environment in which the only people who can survive are artless, propped-up shills.  The English-speaking world hasn't had a new artist with household-name independence since Amy Winehouse, who was arguably an anomaly even at the time, and who has been dead for 10 years.  The Spanish-speaking world has Lila Downs, but her videos are peppered with Illuminati imagery, for those with eyes to see.  I think she will probably live to regret selling her people out to a self-righteous group of globalist control freaks, but she's strong enough that the negative influence doesn't directly affect her art.

In English, though, there is no one.

A generation whose voice is a select group of tightly-controlled, warbling, agenda-ridden sock puppets is a generation without hope.

In a secular sense, you have rejected your own salvation.

Enjoy your free download.  That is, if you can hear it above the sound of gunfire and angry, mindless chanting, encroaching on your lawn.