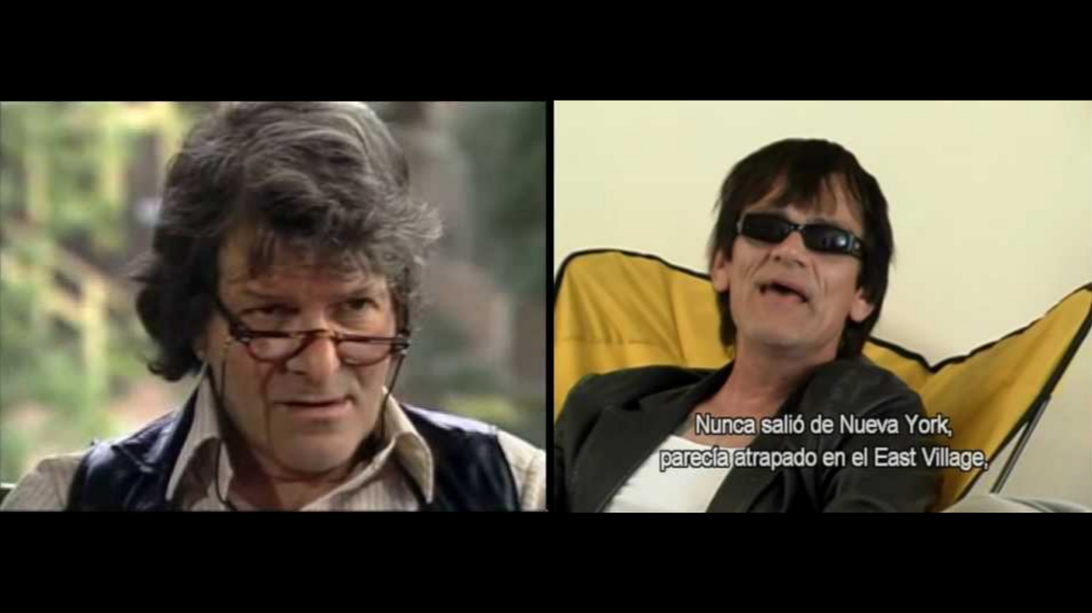 I was big on Gregory Corso in the late 90s.  He was my favorite Beat poet, along with Kerouac.  I carried a copy of Gasoline on  numerous trips; in fact I've always carried it with me, since I bought it at City Lights Books in San Francisco in '98 or '99.  I have it with me now.  I still have a slip of paper with my phone numbers on it, 2 different payphones on 2 different floors of the Sestri Hotel in Chinatown, stuck between the pages.  If you wanted to call me in those days, you had your choice of payphones at the Sestri Hotel to try, and you had to be lucky enough to call when I happened to be walking by the phone.  There was no other way to get in touch with me.

I've been a fan of Gregory Corso's for so long, that it surprised me that I liked almost nothing of what I read, while looking through Gasoline for a poem to read.  I finally settled on "Three:"

Flipping through the book, I felt like I was flipping through the English homework of a punk-rock, 7th-grade gluehead who got  his education from jail, prison, and the streets.  Which I was.  Gasoline is dedicated, after all, to "the angels of Clinton Prison who, in my seventeenth year, handed me, from all the cells surrounding me, books of illumination."  In spite of the decades of inspiration I got from the guy, I literally couldn't find a single poem I actually wanted to read on video.

Gasoline reads like something a juvenile prison junky would write:  unthought-out, random, scribbled, chemically-inspired, disjointed, every idea instantly encased like a fly in amber, forever immobile and absolutely incapable of speaking to any moment in history beyond the one in which it was conceived.  An interesting Polaroid, charting the progress of a crazy, reckless fool in the moment, at best (his influence explains a lot of my own early work).

Nothing like the brilliant, thoughtful work of Dee Dee Ramone, whose minimalist poetry rings with sadness, like a slow and poignant bassline in the night:

You by the phone

It's a long way back to Germany.

So empty.  Bleak.  The sorrow!

Death weeps because Death is human

spending all day in a movie when a child dies.

Which is pretty good, or "It's a Long Way Back To Germany" by Dee Dee Ramone?  Based on the obvious lack of effort in the Dee Dee Ramone song, compared to the Corso piece, which is beautiful but still straining for meaning, I would pick the Ramones song.

What about the middle section of "Outsider," in which Dee Dee attempts to deface himself with disjointed Corsonian ludicrosity, but still manages to come off like an inspired, lovable stuffed animal:

All messed up, hey everyone!

I've already had all my fun

I've already had all my fun

Scholars have debated for years whether the first line, "All messed up, hey everyone!" is a brilliant expression of the carefree spirit while being confronted with extreme circumstantial difficulty, or nothing more than a way to set the rhyme scheme for the rest of the stanza.  I have attended heated debates in my own mind, in which both sides make a strong case.  Personally, I think the debate is unnecessary.  It's a great Rock & Roll lyric, and that's good enough for me.

Comparing "Outsider" to this random, gratuitous, editor-starved line from the Gregory Corso poem "Bomb," which is typed out so that the words look like the explosion of a nuclear bomb on the page,

"To die by cobra is not to die by bad pork,"

which sounds like something I would have written while blacked-out on Nighttrain in 1993,

I would choose the Dee Dee poem.

It's a moot point, of course, because Gregory Corso was Dee Dee Ramone.  They were the same guy.  Watch these videos and tell me I'm wrong:

No way.  Joey Ramone was a socialist, or at least sympathetic to left-wing ideas.  Kerouac was not.  From Wikipedia:  "Kerouac found enemies on both sides of the political spectrum, the right disdaining his association with drugs and sexual libertinism and the left contemptuous of his anti-communism and Catholicism; characteristically, he watched the 1954 Senate McCarthy hearings smoking marijuana and rooting for the anti-communist crusader, Senator Joseph McCarthy.[18] In Desolation Angels he wrote, "when I went to Columbia all they tried to teach us was Marx, as if I cared."  In this photo, Joey is the only one on the fence about the "Socialist Worker's Party."  His thumb is in the middle, while the thumbs of the punk-rock Gregory Corso and the other Ramones are clearly disapproving: 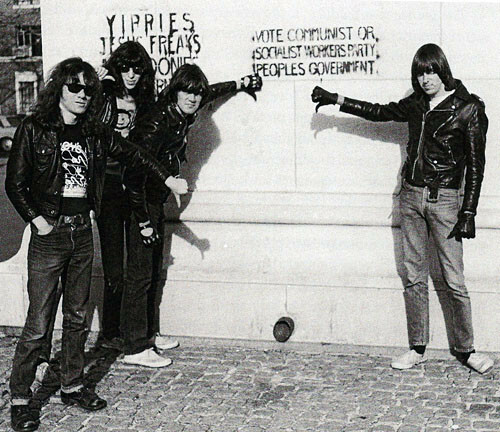 Even if reincarnation was real, and/or it was possible to be 2 different people at the same time like Dee Dee Ramone and Gregory Corso obviously were, or at least tried to be, however unwittingly, there's no way Joey Ramone was Jack Kerouac.  It's the theory of someone who drinks cough syrup for recreational purposes.

And even if Gregory Corso spent his entire career straining at the effortless poignancy that Dee Dee Ramone achieved without trying every time he picked up his bass, I will always be a fan.  He was an inspiration to me for many years.  I came to the Ramones late, by some standards.  Without the influence of Corso, who knows, I may have never gotten there.