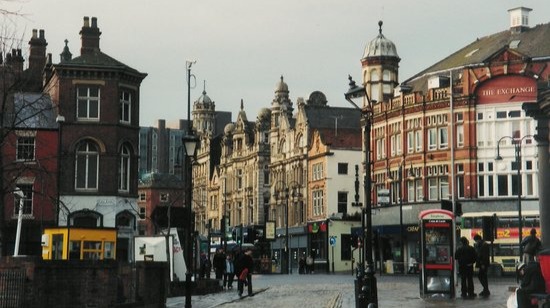 5 reasons I fell in love with Leeds

It was a cold February day when I first set off for Leeds. For whatever reason I had to take three flights to get to the Leeds-Bradford airport and my day seemed to get longer and longer with each take off and every landing. At the time , I had no idea what to expect. I've never left my country before and I've never been on an airplane. This was before the time of Google maps and there was very little information online. I had a bunch of printed maps to show me how to get from my hotel to the office but that was that.

1. My first memory of anything outside an airport on that day was a black can taxi that took me from the airport to drive me back to my hotel. I distinctly remember that the can driver had a football game on. Some fading images of narrow roads with lots of hedges on the sides and a football commentator excitedly narrating the course of the football game which of course was a Leeds United game. Little did I know at the time that Leeds United will become my team for life.

2. The next few days, in my spare time, I took it upon myself to explore the local area. I was fascinated by the architecture of the northern city, by the friendliness of the Yorkshire folk and in general by the novelty of this country, so different from my birthplace. I would spend hours reading books at Borders, I'd walk for miles across the canal or around the areas adjacent to the city centre and soak in the atmosphere and the smell from the local brewery too 😁

3. After expressing interest in Football in front of my colleagues, eventually, one of the senior guys in the team has managed to secure the company's box at Elland road for a midweek game between Leeds United and Fulham FC. This was my first visit at ER and it has left me mesmerized and forever in love with this football club. The stadium was at its 40k capacity and Leeds fans seemed to never stop singing. It's fair to say, that I have never experienced anything like it. The loyalty, the passion, the never ending enthusiasm to support the players.. I was enchanted and I knew there and then that I have finally found my club to support.

4. Over my first stay in Leeds, I went to various pubs to try different beers and Alex which is something I do to this day weather in at home or visiting some place. Now pubs were very different from what I had experienced back home. Even the "Irish pub" in my city was no match for what I saw in Leeds. And then the people I met who happened to be so friendly and chatty even if I obviously wasn't from that place and probably didn't fully understand what they were saying. I always felt the warmth of people despite the cold weather outside.

5. I went back to Leeds, several times and I loved how it has changed over the years. New buildings, new parks and roads and bars and restaurants. I've been to ER of course and walked around the same places I've been to before. I have always felt the same feelings as before which cemented my love for both the city of Leeds and Leeds United FC. I can only feel blessed that was presented with the chance to visit and get to know the place and the people of Leeds.

My most recent journey, just a few days ago, reinforced my beliefs. I fell in love with Leeds and it's for life.