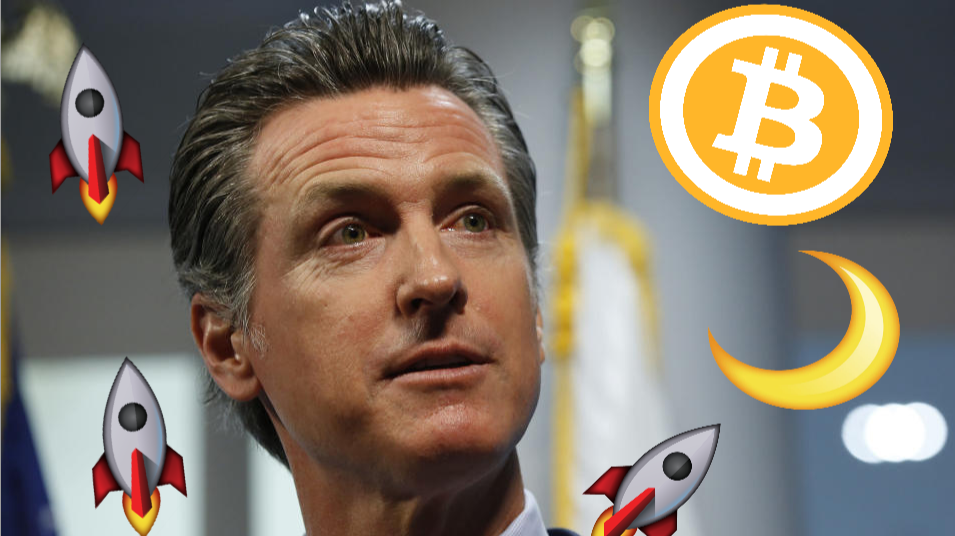 So at this point I'm certain nearly all of us (or at least some of us) have heard that Gavin Newsom, governor of California, signed an executive order which is being purported as cementing California as being the most cryptocurrency friendly state. You can go and google the fact yourself and be met with article after article purporting just that fact, however, none of them seem to even so much as reference the executive order which is allegedly cementing that fact. So, as a good Californian, I read the short, five page executive order myself which I have further linked at the bottom of this article. In short, it's a good first step but I do reserve some concerns over the order and what it means about California's likely steps. I have selected a couple of quotations from the Executive Order which can give all of us a more expanded idea of what exactly was said in the executive order than what you'll find from those in the media who are still questioning what is the block and why does it have chains.

"WHEREAS past generations of innovation lacked proactive and early engagement by public institutions, leading to unintended social consequences and inequitable benefits across society, as well as governmental attempts to regulate only after business models and interests have solidified"

This section is interesting and both exciting and concerning to me as well. Right out of the gate, California is making its intentions known that it views the past hands off nature of the dot.com era as a failure (with a good point due to failures such as the dot.com bubble). The state intends to roll out regulations before the crypto space becomes normalized with the public as well as before a proper business space has solidified, e.g. before we start talking about the "Microsoft V Apple" of Crypto. If California comes forth with forward thinking regulation that aids in the foundation of business as well as preventing anti-consumer behavior such as rug-pulls, then this is a great forward thinking policy. The only inherent risk here is that the state oversteps its bounds and the Crypto industry will spurn development within the state.

"WHEREAS over the past decade, blockchain technology has laid the foundation for a new generation of innovation, spurring a rise in entrepreneurialism in sectors including financial technology, supply chain management, and the arts"

I've included this quote as it does tell that there is value seen within Crypto by California and that a strong new sector of business is expected to emerge. As the state of Silicon Valley, California is clearly chomping at the bits for the opportunity to monopolize this early sector as well, which may prove quite lucrative for both California but entrepreneurs in California who would be hoping for a friendly business environment.

"WHEREAS the Department of Financial Protection and Innovation was established in 2020 to monitor and manage emerging risks and opportunities, with the twin goals of strengthening consumer financial protection and cultivating responsible innovation that provides value for consumers"

Supporting what was earlier said in the blurb about California's intentions to front-run regulation on the industry, we can see here that the state has already dedicated resources to monitoring the crypto space (since 2020) and plans to continue to do so and use those findings to both aid in business innovation as well as regulate to protect consumers.

"WHEREAS state agencies should work with, and concurrently to, the federal government to make California the first state to establish a comprehensive, thoughtful, and harmonized regulatory and business environment for crypto assets"

"It shall be the goal of the State to create a transparent and consistent business environment for companies operating in blockchain, including crypto assets and related financial technologies, that harmonizes federal and California laws, balances the benefits and risks to consumers, and incorporates California values, such as equity, inclusivity, and environmental protection."

With the goal of being the very first state to establish itself with an open business and regulatory environment for Crypto, California again reiterates that it wants to be seen as the most crypto friendly state in the union. One tidbit to notice within these quotes, however, though is that California specifically cites the need of environmental protection within the blockchain. This makes me feel that California may attempt to spurn Bitcoin altogether in favor of coins which are more environmentally friendly like Cardano, Avalanche, Polkadot, & Solana due to their nature as proof of stake coins. I can also see a bullish future for Etherium in California assuming that the upgrade can happen by the hopeful ~2022 goal. I also have somewhat of a feeling that a coin like Hydera may have a bullish future within California as I feel that the government would be more than happy for traditional finance to adopt crypto in their day to day usages. I also can see something like Stellar Lumens being accepted within the state due to its nature of being able to accomplish quick and cheap money transfers and in a state that is majority Latino with many inhabitants sending money across the border to their families, a cheap and safe way to do this would be appreciated by the state population. The biggest concern I have from these developments is that I feel like California is going to spurn DeFi and Americans will continue to be pushed out of opportunities for investments due to pressure from the SEC. This may potentially put California in a position for being an amazing place to operate a crypto business or invest as an accredited investor but overall in need of improvement from an average everyday citizen.

"When procuring work from blockchain vendors, all executive departments and agencies subject to my authority shall first assess the fitness of blockchain technology for the specific purpose and consider factors for appropriate applications as identified by the California Blockchain Working Group, including, but not limited to, sustainability, favoring procurement of technologies with low energy consumption when possible and appropriate."

This final quote illustrates my belief that California will spurn coins which rely on a proof of work concept due to being against the states open sustainable future. There is an amazing piece of information in here as well, Californian agencies will openly be allowed to work with vendors who utilize blockchain technology and as long as it can be established that a blockchain will indeed help with state government, we may be seeing the actual state government of California involved with a blockchain in the next couple of years. I think this shows a potentially incredibly bullish future for crypto within the state of California in the coming future but perhaps more reliant upon alt-coins and newcomers than one might expect.

In Conclusion, Gavin Newsom is buying the dip and bagholding on Solana. He's also probably a believer in the flippening. Source on those two claims? I made them up. The executive order is linked below if you'd like to read it. If you want me to go more in depth about predictions of the future crypto market in California, please show interest in a comment and I'd be happy to publish a new post just about that topic!