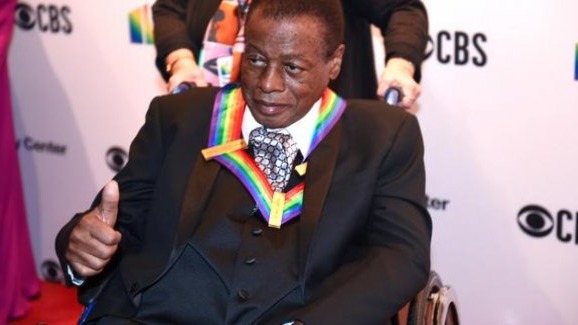 NFT and DeFi — A Promising Union for Music?

According to experts, it is the DeFi paradigm that has helped NFTs to become liquid. It has freed NFTs from being seen as an expensive proposition. In order to increase $MUS adoption inside the Musicoin platform, we should provide to our community some tools for encourage interaction with artists and generate some rewards for both. So let's make PPPs smart contracts tradables like in NFT economy and be able to generate incame like in Defi Economy.

This contract will automatically share royalties generated by the PPP smart contract (streams and tips) with fans and investors. Let's see how step by step

2) Let's say we use NFTs token (ERC751 or ERC1155). So the owner of the license of PPP smart contract it will create the NFT inside one of the many NFT creator platform as Rarible, Opensea or Mint https://app.rarible.com/create/erc1155. He will set up the NFT contract with an

One day it could be automatized inside the Musicoin Platform 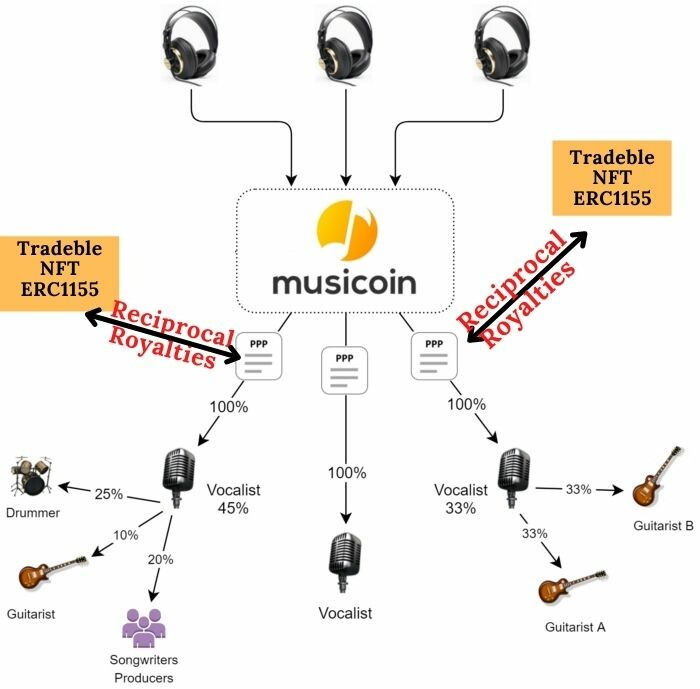 PPP smart contract and NFT token have two differents purposes. The first symply share the rewards generated from streams and tips with all the creators of the music work, the NFT token will be trade in the market and his price will change. To be able to create an interest to purchase it, the owner of the PPP license will set up the reciprocal royalties in between the two contract.

Musicoin Foundation or all the staked funds could stimulate this creation market with some daily rewards for all NFTs stakers, purchased with $music (buy pressure). This reward could be weighted according to the number of followers of the owner of the PPP smart contract (Musicoin adoption). This NFTs should be purchaseble in other cryptocurrencies as well.

Demand of a product is defined by the quantity demanded of that product or service by the consumers in the market place. So all Musicoin users and all crypto users per extension could be able to join this market with many differents cryptocurrencies (Eth, Skale, Btc and so on)

The demand function shows the relationship between the quantity demanded, the corresponding price and other factors affecting it. It is represented as-

Where, Dx = Demand for the product

Px = Price of the NFT token

T = tastes and preferences of the consumers

Y= Income of the buyers

We are going to implement Musicoin with the Skale sidechain in order to reduce gas fee and increase scalability. If you are a devs and you would like to participate to this project please do not hesitate to share your skills for music and artist, giving to blockchain a better human and cultural purpose. This document is an open source document, fell free to improve it for the common goal to let the music play all aorund the world.

Musicoin Pay Per Play (PPP) smart contract is designed exclusively with the interests of musicians in mind. All musicians on our platform retain full ownership of their content, and are rewarded fairly and automatically through autonomous smart contracts. It brings a new level of transparency and clarity to the music industry that is plagued by complex and obtuse licensing contracts. With our PPP smart contract to enforce and execute licensing terms, musicians can receive instant payments based on each playback. No intermediaries are required to facilitate payments other than the ledger of the Musicoin blockchain. 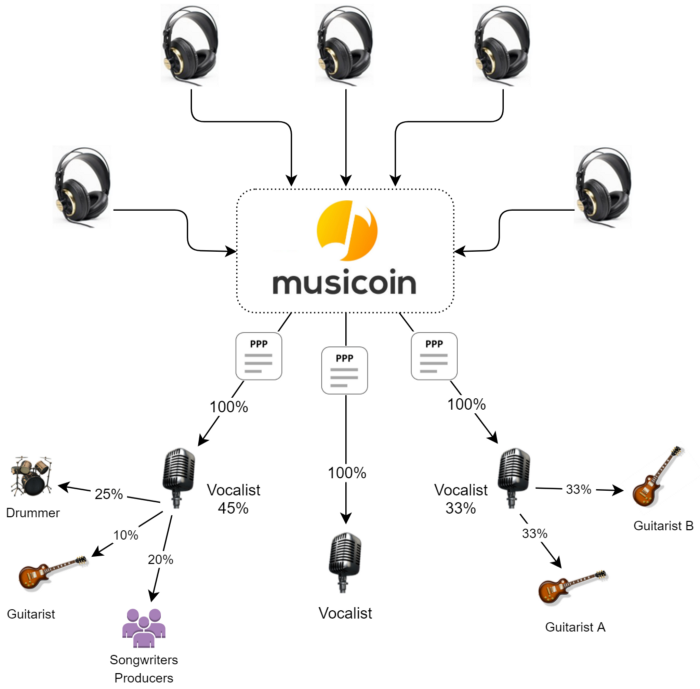 One of the advantage to a PPP smart contract is that it can execute immediate revenue split to several beneficiaries. For example (Figure 1), a PPP contract of a license for a four-person band can enforce a split payout of 45% to the main musician, 20% to the songwriters and producers, 10% to the guitarist and 25% to the drummer. The use of this contract allows us to avoid unnecessary costs in content acquisition by removing all middle-men involved and thereby distribute 100% of the earnings to the musicians.

Musicoin history however show us that PPP smart contract it is not enought to embrace all the music economy, we forgot investors, fans, represented by labels. Musicoin aim to disrupts music industry

If we analyse the Music Economy we can find 2 most importants categories of stakeholders representing SUPLPY and DEMAND. The first one (supply) can be regulated by PPP smart contract, but not the second one (demand).

For the second one we are going to introduce NFTs. Ethereum’s rapidly growing NFT ecosystem has really taken off over the past few months. At the beginning of December 2020, the top five players in the NFT sector had seen over $1.2M USD in volume over the past seven days. One way NFTs derive monetary value is through scarcity—and in the Musicoin world, the unique traits of each PPP smart contract determine their value.

Each PPP smart contract represent a scarcity in the music economy, so it can became a NFT or any other smart contract create for this purpose. Since the beginning of recording music, each music works represent a scarcity. Before Napster this scarcity was regulated by labels (Universal, Sony and Warner), who easily monopolized the market, operating as a oligopsony purchaser of the large part of music supply.

Oligopsony a state of the market in which only a small number of buyers exists for a product.

With p2p the demand of the goods (i.e. the music in digital as well as physical form) was increasing. Hence, production houses had to decrease the prices of the product to boost up the sales but even then the demand wasn’t going up in the same extent as the prices were coming down. This discouraged the music stores and other retail chains from keeping the records as they were suffering losses. Hence, the media and production houses couldn’t recover their investments they put into the artists and other technicians, to produce the mp3 audio as well as the video. (source https://www.abcassignmenthelp.com/ethical-and-revenue-analysis-of-music-industry)

With P2P protocol and mp3, Napster disrupted the market. Everyone was able to download music with their PC. Before Napster came in 1999, the revenues of the music industry was rising at an increasing scale and it went up to $13 billion (approx.), and after the entry of p2p share file system, the revenue of both the physical recorded music and digital sales of music decreased to $5.5 billion and the consumption of music exploded.

Costumers surplus increased enormously.  However, even with an unprecedented reduction in piracy and growth of the streaming market, the music industry is still facing the same problem. Musicians, especially the upcoming and the lesser-known ones, derive a paltry portion of the total revenue generated from their work because most of that revenue is consumed by intermediaries, the same entities who claim to represent their best interests. This problem is predominantly due to centralization, lack of transparency and an unsustainable business model. (Musicoin White Paper)

The problem is bigger than we thought if even Wayne Shorter is not no long able to pay his medical cares.

fans of jazz worship and see him as one of the greatest performers of the Twentieth century. But today Wayne Shorter, now 86 years old, suffers from severe heal 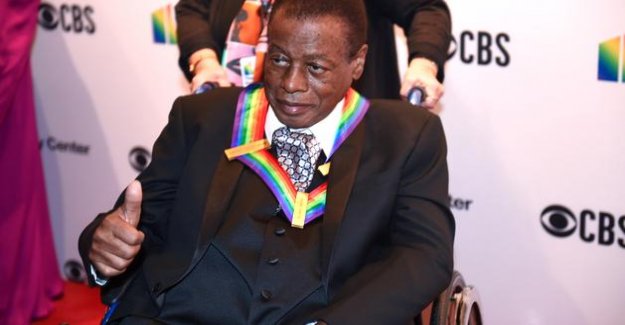 fans of jazz worship and see him as one of the greatest performers of the Twentieth century. But today Wayne Shorter, now 86 years old, suffers from severe health problems requiring a charge costly that he can only assume. In a spirit of solidarity and for the great saxophonist the middle of american jazz will create a sort of pot fueled by the revenues of charity concerts, tv-online, and by contributions of $ 5, which is intended to pay for the medical expenses necessary to the care provided to the great jazzman.