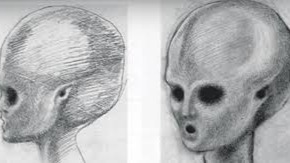 Abduction – This term became common from the 1980s onwards. It defines the report of a person taken against their will inside a flying saucer, where they undergo clinical examinations and/or experiments. Usually, the witness does not consciously remember the process and the exams, but shows physical signs such as perforations, marks of drawing blood and even supposed implants. A study developed by the North American Budd Hopkins, a specialist in cases of abductions and author of the book “Intruders” (Intruders), states that this type of contact may already have reached 2% of the world's population.

Area 51 – Restricted access area located in the State of Nevada, United States, in the desert region and beside a dry lake, the Groom Lake. The American ufologists, based on the testimony of Robert Lazar, a scientist who claims to have worked in a secret base installed there, assume that the four aliens who would have been captured in Roswell, in 1947, after an accident were sent to Area 51. involving a UFO. The US government does not recognize the existence of the area, but the signs indicating prohibited access to unauthorized persons are definitive: “NO TRESPASSING” and “WARNING – MILITARY INSTALATION” (Danger – Military Installation).

Asket – An extraterrestrial female entity from Pleiades, supposedly involved in the story of Eduard Meir. Asket lives in a universe parallel to ours. His messages encouraged Meier to explore the world. She said he was chosen to spread the truth to the world and become the smartest of his time.

Autokinesis – Illusion caused when observing a light against a dark sky. Example: Venus. The observer may think that the light is in motion, but if observed for a longer period of time, it turns out to be a star or some other type of light (even terrestrial) .

UFO Casuistic – The set of occurrences related to the UFO Phenomenon. The Group of “UFological Cases” over time.

Chupacabras – The name originates from Mexico and the Caribbean, regions where they have been frequently observed. They are creatures normally associated with the phenomenon of animal mutilation, and, according to several reports, they are always seen in regions with intense observation of UFOs. They got this name because one of the characteristics of the animals supposedly mutilated by them is that they are found without blood and without any mark to show where that blood went. There are reports of several physical types of these creatures, but most point to at least two coincident features: paws with three 'fingers' and large claws, and large, very red eyes. UFOlogists speculate that they are EBEs without intelligent behavior.

Immediate Contact – How “encounters” with artifacts of non-terrestrial origin or possibly alien creatures are classified. The immediate contacts (CI) are classified, in Ufology, according to the complexity and level of approximation, subdivided into degrees:

First-degree IC: when the witness claims to have observed an unidentified object at a great distance.

Second degree CI: when the UFO interacts with the environment leaving physical evidence of its passage, such as landing marks on the ground, vitrified minerals due to high temperature, side effects on witnesses, such as burns or hair loss (caused by radioactivity or heat ), electromagnetic interference in electronic devices, etc.

Third-degree CI: when the witness claims to have established any level of communication with the occupants of a UFO.

Grays (or Grays) – As the EBEs are called with which the reports of Immediate Contact are more frequent. They often appear as responsible for cases of alleged abduction. By morphology, they are divided into three other subcategories, called A (more frequent, with about 1 m to 1.4 m in height), B (with 2.1 m to 2.4 m in height) and C (with about 1 m in height height). They all have similar characteristics: large black eyes, hands with three or four fingers, a large head disproportionate to the body, whose appearance approximates to the skeletal. A comparative study based on the reports of alleged contactees indicates that Grays type A and C show more hostile behavior, indifferent to the suffering of abduction victims. Unlike Chupacabras, they are supposed to be rational beings.

Hypnosis – Process of changing the level of consciousness that allows the person submitted to it to remember information stored in the subconscious and that she believes to have lived and to be true. It is an alternative treatment to the amnesia presented by alleged victims of abductions. It is generally only applied by medical professionals and requires caution to avoid the hypnotist suggesting the hypnotized person, in which case the hypnotist could “create” new facts and report them as being true.

implant – When the first cases of abductions started to appear, the ufologists found that normally the supposed contactees reported a procedure common to almost all the contacts: the introduction, by the kidnappers, of a tiny object in some part of the body of those contacted. Surgically, through the nostril; or subcutaneously, in the nape or abdomen region. The UFO literature reports hundreds of cases where the implant was observed, through X-rays or more sophisticated exams, such as computed tomography or magnetic resonance. This same literature, however, does not definitively clarify the origin of these objects, whether they actually have any function and, mainly, does not expose technical reports from professionals in the medical field about this type of occurrence. In the last years,the frequency with which researchers claim to find implants in abduction victims has increased. As well as a “technological evolution” of the artifact was registered: in the beginning, the implants supposedly found were made of metallic alloys. Today, most cannot be detected by X-ray examinations as they appear to be made up of organic material.

Time Lapse – Period of time a contactee says he does not remember. It is present in 9 out of 10 abduction reports.

MIBs – Abbreviation of the English Men In Black, or, Men in Black. Figures that date back to the beginnings of Ufology. Initially, they were related to the actions of US intelligence agencies. Reports say the men in black visited UFO witnesses and threatened them not to tell their stories. Apparently its activity dropped a lot, but it became more refined: now there is talk of "Black Helicopters", which would appear in places where UFO sightings occurred. A variant of this interpretation says that the MIBs themselves are extratarrestrials.

Mother Ships – Large UFOs that would serve as a starting point for
smaller ships. Usually Mother Ships are cigar-shaped.

Probe Ships – Ufology classifies how ships probe flying objects of unknown origin, of various shapes and sizes, but usually less than 1 meter in diameter and with their own light. They are generally spherical and only accompany people, cars or land aircraft, without directly interfering with the environment. They are believed to be remotely controlled observational artifacts. In Brazilian Folklore, they resemble the descriptions of the “Mãe D'Ouro”, which the indigenous peoples of the north of the country believed to care for the forest.

Lenticular Cloud – A cloud that forms under certain weather conditions and that, due to its lenticular (or discoidal) shape, is often confused with a UFO.

Operation Prato – Operation developed by the Brazilian Air Force (FAB) to secretly investigate Unidentified Flying Objects in Pará in 1977 and 1978.

Orthoteny – Imaginary corridor that would constitute the most probable route of the UFOs. The “orthotenic lines”, as they are called, were first pointed out by the French ufologist Aimeé Michel, in the 1950s. -mother, shaped like a cigar. And from the connection between these crossing points came what appeared to be routes used by unknown aircraft. One of the best known routes is BAVIC, so called because its discovery came from the connection between the cities of Bayonne and Vicchi, in France.

OSNI – Unidentified Submarine Object. What UFOs are called when seen under water.
Ball rays – Meteorological phenomenon commonly confused with UFOs due to their spherical shape and fast movement. It forms under circumstances that are not yet explained, but it is known that it is produced through an abnormal accumulation of electrical energy in a limited space.

Esoteric UFOlogy – A branch of UFO research that admits a non-physical existence for the UFO phenomenon. It brings together scientific and spiritual concepts.

I will publish occultism texts