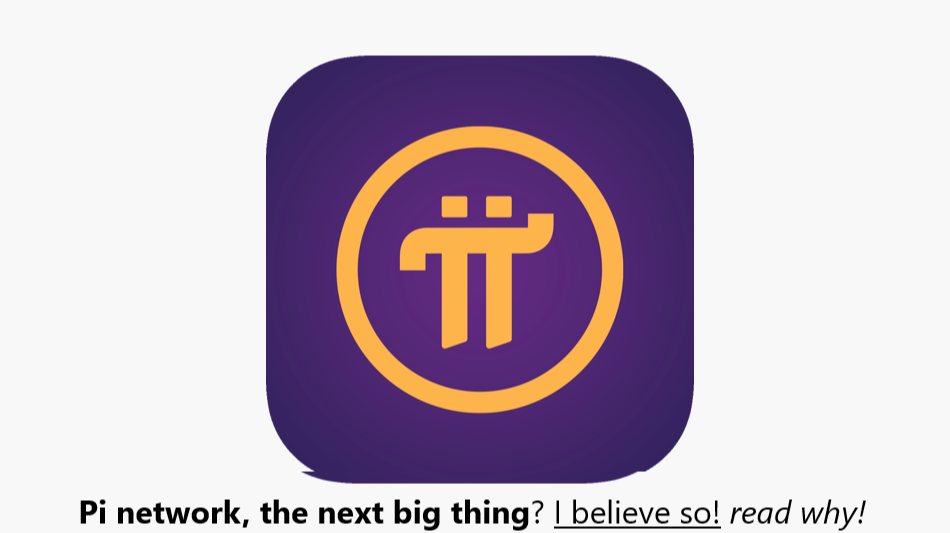 Different mineble coins on your phone - first out: Pi network, in this one I'm a huge believer.

Hello and welcome to a evaluation of different apps, there you can mine their coin for free.

First off, I've always been a fan of try to find new solutions to get in to the crypto market whiteout invest a single dollar. It has taken me long time to find some ways that might actually go thru. In this episode I will talk about apps, yeah apps on your phone. Apps their you mine "their coin" that supposedly could go thru to be as all other cryptos, a listed coin on Coinmarketcap. I will go thru each one and this "apps" in a miniserie.

First we start with:

Pi network was the first app i got in to their you could mine their coin "Pi" for free. The infrastructure of the app to me pretty solid and give you a serious impression. I'ts also easy to use you only have to press mine every 24th hour, so we say you press "mine" at 10 am then you have to press "mine" 10 am next day to continue the 24 hour mining session.  Pi network has been around for a while as an app on both app store and google play, so the speed of the mining has gone down quiet a bit, the mining rate has been halved according to set of different goals. These goals has been when Pi had reach a specific amount of "pioneers" was achieved. We that secure the network are called pioneers (miners).

To get to a higher mining speed you have to invite people to Pi to mine and you add those to a security circle and by there get higher speed. You can get higher mining speed for A: You get a a maximum bonus if you have five in your security circle, you get a bonus of just one or two as well. These need not to be active mining themselves for you to get that mining speed. B: The amount of the people you have invited that are online mining.If you have invited for example fourteen pioneers, nine of them are active mining you get a bonus for these nine because they are active mining.

A smart function is that you can once every 24th hour ping your "team" the ones you have invited and those that are not active mining gets a pop-up on their phones telling them to start mining. A good function for both part.

Pi has a goal to release mainnet in the end of the year, I really think this is going somewhere. The testing of the nodes is in stage two, myself applied to join being a node and now I currently being tested for just that ( I hope Pi become something big and I get the approval to be a node).

They recently released a second app: Pi browser in this app you have you're wallet. The wallet is now in testing stage and you get a free 100 Pi in the wallet until you can have your own mined Pi in it when it's ready. The wallet is unlocked by seeds, a phrase of words in a specific order. You also get a public key so others can send you Pi. The the second app their is also a chatt, a browser and a brainstorm forum. The brainstorm forum is for pioneers to come whit ideas to the development of the eco-system, the blockchain and so on.

In the future you need to verify your phone number and facebook you can do it now as well, but it's not needed for now. You have to to in in the future to be able to sell/trade your Pi.

The core team we have two people one is Dr. Nicolas Kokkalis (Head of technology) and the other one is Dr. Chengdiao Fan (Head of product). Nicolas is a PhD on Stanford University, he also seems to have a good understanding in general in all regards within cryptocurrencies. He has also developed a framework for writing "smart contracts" on fault tolerant distributed systems. This was even before the blockchains.  Dr. Chengdiao Fan seems also to be a credible person she has a PhD in Anthropological sciences from Stanford University and what I can read she likes the technology of blockchains and how they can increase a more decentralized environment.

Pi Network has a white papper and when I read it I love what I'm reading and I quote.

" Our mission: Build a cryptocurrency and smart contracts platform secured and operated by everyday people."

The also in the whitepaper state a vision and that vision is to build the world´s most inclusive peer-to-peer marketplace, this marketplace of course running and fuleled by Pi. They also state in the vision that Pi will be the world´s most used cryptocurrency, that´s a bold statement. But heyyy set the goals high and aim for the sky!

I truly believe in this project the community is strong and has reached 17 million pioneers! that´s a lot, it´s not only me believing in this. It speculates that Pi could reach a value of something between 10-100 dollar per pi, that's maybe a very bold staement, but who knows really?

-It´s easy, just download the app and you ready to go

- It takes no time from you, it´s rolling by itself

-If Pi is a success would you not regret in the future not doing the first "Pros whit Pi Network statement"????

Thank you for your time!

if you fell like sure I will give this Pi network a chance I would love if you used my invite code which is: Rallee, you get asked when you configure the app after a invite code.

In my blog you going to learn more about new technologies according to mining but also about new upcoming projects, as well about new airdrops and free ways to earn more cryptos/tokens. Welcome down to the dungeon (mohaha)