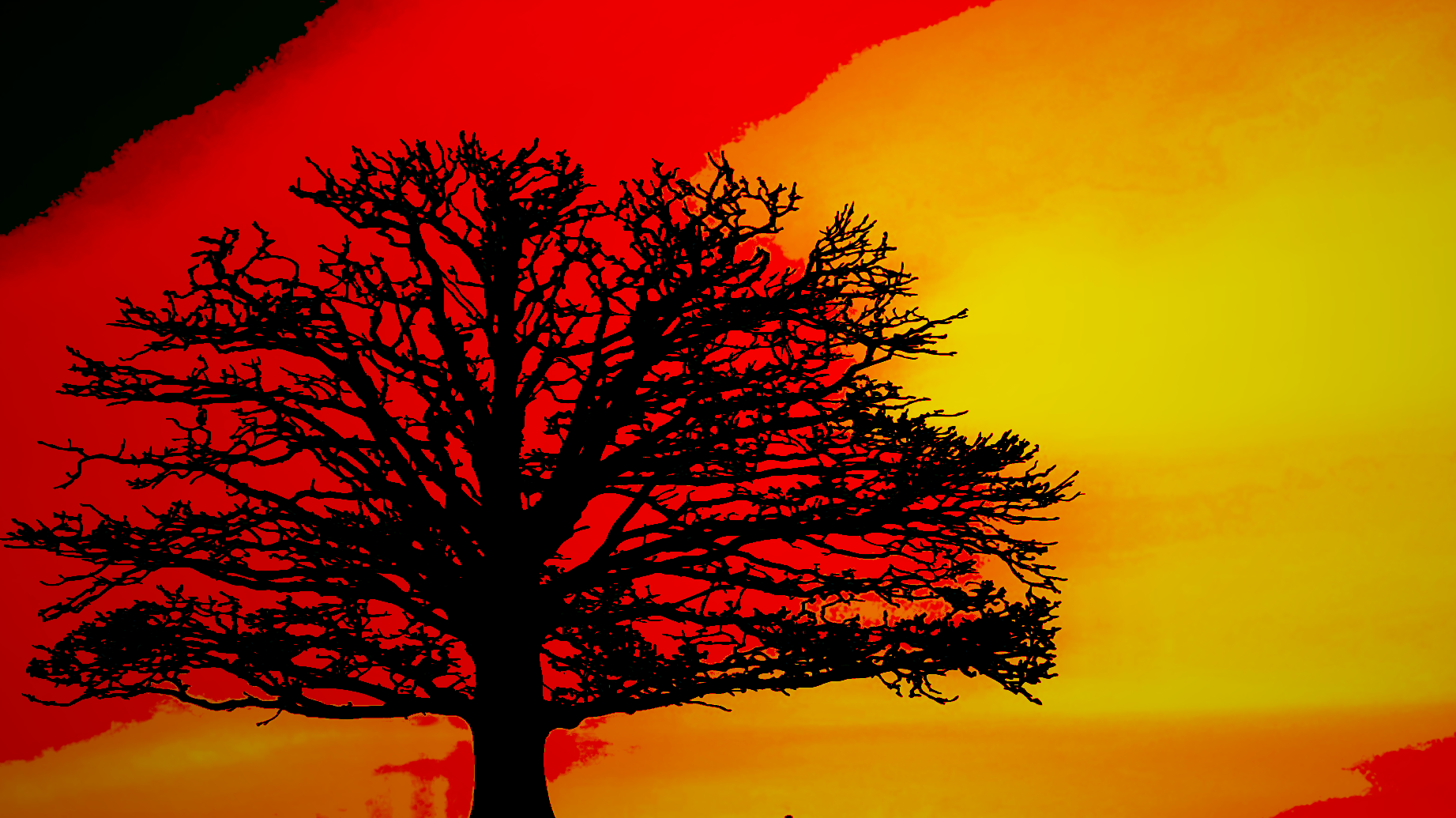 The Truth of Life 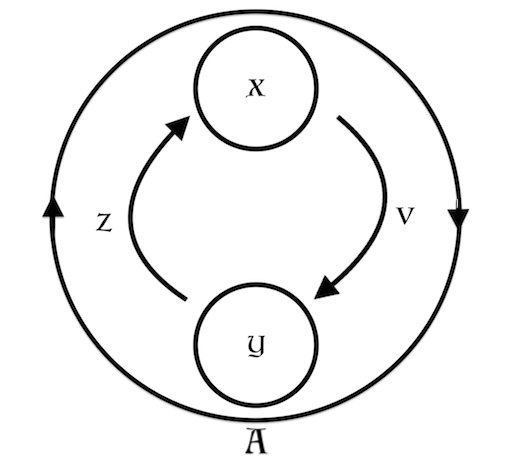 X - The Truth of Life

Y - The Subject that Desires the Truth of Life

Z - The Desire for Meaning

V - The Intangible nature of the Truth of Life in Man’s Fallen State (i.e. in His current form, to see anything as it truly is, completely)

A - The mimetic process, qua the mimetic process, a self-sustaining system, only brought to a positive feedback position by the relinquishment of the unobtainable, insurmountable, healthy desire for meaning in truth, couched in the metaphorical and transient narratives that reflect the truth.

In Figure 1, there is a representation for the healthy model of desire, which allows for precisely what the subject desires from their object, which will not become a rival capable of mimicking the subject in response, and will not let the subject be prone to being consumed by the desired object’s lack of insurmountability.  In this model, the subject recognizes their desire for meaning, recognizes their desire for truth, and most importantly, they do not forgo it by missing it for their wish to be different, for their wish to excel beyond themselves.  In this desire, truth can only be ascertained through life; i.e. to see — in death — the deathlessness of one’s form; to see — in death — the potential for life, the potential for something more; the deathlessness of existence; to walk through the Valley of Death and be renewed by it, not undone.  It is not the denial of death that is being reflected in the model, but the recognition of it, and in it, the truth of its nature, which is that one’s life is perpetuated even in death, even when no one sees the dead alive, even when no one realizes that the nature of one’s life and death — so to speak — lives; i.e., one’s life, Life, all endeavor is wholly un-devoid of meaning.  It would, then, be strange to claim there is death in this notion, or that one can ever really claim to be dead.  Therefore, this desire both serves as a healthy goal for the subject, and inhibits the desire for failure to be reflected back on one’s self by acknowledging its existence, submitting to it, and in that submission, overcoming it — at least partially, as Man is in a fallen state.  The mirror opposite of this would be its denial, would be its disdain, would be its dismissal for the subject’s own sake.  In the healthy model though, the subject doing the desiring has found that obstacle to be overcome and ascertained, which serves as the insurmountable obstacle and rival to their desire; i.e. Truth and meaning, through life, serve as the desire and obstacle to be overcome and ascertained, which can never be overcome — fully ascertained — and perpetually offers meaning; this sublimates the rivalrous nature of those desiring that which will serve as rival, and object of desire, into that which will not precipitate failure, their end, as their end concludes with the goal that, as we’ve indicated, is endless; the deathlessness of existence and meaning through the Truth of Life; i.e. they are systematized into what they desire; they enter the fold of their model and, thus, become like, or are with, the model: the object of their desire —The Truth of Life.

This Truth of Life is not the mere acknowledgement of death, nor the ubiquitous nature of death, nor, even, the finitude of Man’s state, but, truly, its meaning.  It is, oddly, this meaning in death that negates its effect upon those affected by it: the path of nihilism, power, control, and animosity.  The denial of the Truth of Life, which — necessarily — must include death, results in nihilism as it fails to see the meaning of our life, even in its fragile and limited state; aims for power and control; for — if life is limited — those affected by nihilism would hunger for power, would hunger for control in the finitude of their existence; as being powerless and control-less would make one a subordinate of another, would make one a subject to another’s whims, to another’s power, to force one to bend-knee to another and accept their control over them, inhibiting their ability to live in accordance with their desires; then, ultimately, because — either — control and power are always out of grasp or are always at risk of being usurped, between all other objects there is a desire to overcome them, even if they are already subjects to the one controlling them, to the subject who has ascertained, yet still, desires their control.  This is all negated by accepting death, accepting its meaning, accepting that, in death we live on, that we live through our life which is untouched by our death; for death grants meaning, mirroring the  lack of meaning that nihilism supplies it, offers the meaning that death is not final, that death is fleeting, and that the meaning of our life is endless, and so makes our life endless.

To also state that the goal of the subject is a rival would be wrong, but rather, the rival is a rival only in so far as it is that which is wished to be ascertained, which renews the subject with its meaning through their desire for it; or in other words, a teacher.  This teacher is not ascertained in any one thing as that thing, in any one object as that object, in any one subject as that subject, but in the many ways in which the nature of that object can be revealed, as no subject is capable of grasping the object as the object.  In many and varied ways, the metaphorical nature of the object, through its self-spoken narrative (i.e. through the story of its existence, which speaks for itself, and as itself) reflects in its ineffable form the truth of existence, which also impresses meaning onto the one desiring it, but never in so far as it lasts or in so far as it reveals the whole of what’s being examined.  This rival, that is teacher, then, never lets down the subject in its aim, but also, never gives away more than they need, never grants them — in totality — what they want, but also, never inhibits them from tasting its fruits.  It is the tree from which desire may be sated and their pathological aim thwarted.

Only in forgoing this mimetic process does the subject entreat the other desires that perpetuate their suffering and pain through their end, without the recognition that said end is meaningful — can be meaningful; i.e., the very Truth of Life that perpetuates life is replaced with the system that continues the subject’s demise by making of them a victim of their own desires.  When the subject entreats the mimetic system opposite “A,” they drive themselves, as individual or whole, towards their end; they entreat that which they want to overcome most, which, has already been overcome — merely by denying that the success over their seemingly insurmountable obstacle has been ascertained, that the victory over their final obstacle has already been won; thus, confining them to that which they wished to relieve themselves of, which is their likeness to those that, despite their excellence, would be their equals.  That is not to say they’re to forego their individuality, but are exacerbating the strife resulting from their wish to differentiate themselves from their rivals.  They drive themselves towards differentiation by condemning and upbraiding their opposite — without seeing cause for condemnation or reproach in themselves.  Yet in the end, they are made equal by the failure of their fey desire.  This, ironically, only validates the truth of their life, what they ought to have been aiming for, by supplying it to those who are prudent enough to ascertain it in its self-spoken narrative: meaning. 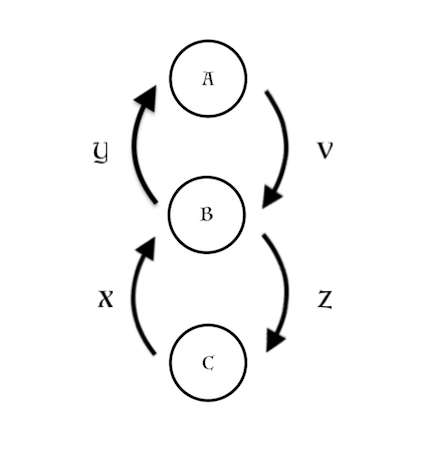 B - Subject Yearning for the Eternal Obstacle

X - The recognition that C has been ascertained, its nature revealed, its obstacle, overcome.

Z - The scapegoating of the unhealthy mimetic obstacle.

Y -  the desire for the truth, which is mimetically intangible yet, literally, always there.

V - The inability to ascertain the truth qua the truth that drives the desire to reflect it in its varied, yet unified and unanimous, forms.

In Figure 2, there’s a representation for how Figure 1 is embraced.  The unhealthy mimetic system is replaced with the healthy mimetic system through the subject that is yearning for an eternal rival, or obstacle.  This occurs when B recognizes that C has been overcome, that is, when the subject yearning for an eternal rival, or obstacle, will not be sated by the unhealthy mimetic system, as it has already been overcome, constrained, defined; i.e. defeated.  What then occurs is the scapegoating of C; the unhealthy mimetic system is marked out from other mimetic systems, but as all other unhealthy mimetic systems reflect the unhealthy mimetic system, another system — all together — must be acquired.  It is in this moment of disassociation, in the whims of an eddying storm, that the subject is yearning for that which they cannot ascertain, that they — either — seek out truth or are deluged by a desire which has no object to be sublimated into.  It is in this existential crisis that truth is ultimately desired — if only to alleviate the subject’s crisis.  Through that desire, the perpetual aim for that which serves as rival, the teacher, and grants the subject their insurmountable obstacle and their raison d’etre, the meaning which grants them life, which is the Truth of Life, are embraced.  This Truth of Life is that which is communicated through their experience, communicated through their narrative, and in turn, observable in all other aspects of the subject’s world, acquired in a plurality of forms, all of them communicating a unified and unanimous truth.  And because this truth rests in an obscured, but ever fruitful state, and cannot be fully acquired as a result of Man’s nature, it satiates the subject’s desire for a rival that cannot be defeated but, also, is eternally worth desiring; granting them the sustenance to continue their existence, to live, even with, and in, death; i.e., the subject desires the rival, the teacher, as it serves as an insurmountable obstacle, is the model of their desire, feeds their desire, and allows them to ultimately become like and with the model with their end, granting them — fully — what they desire.