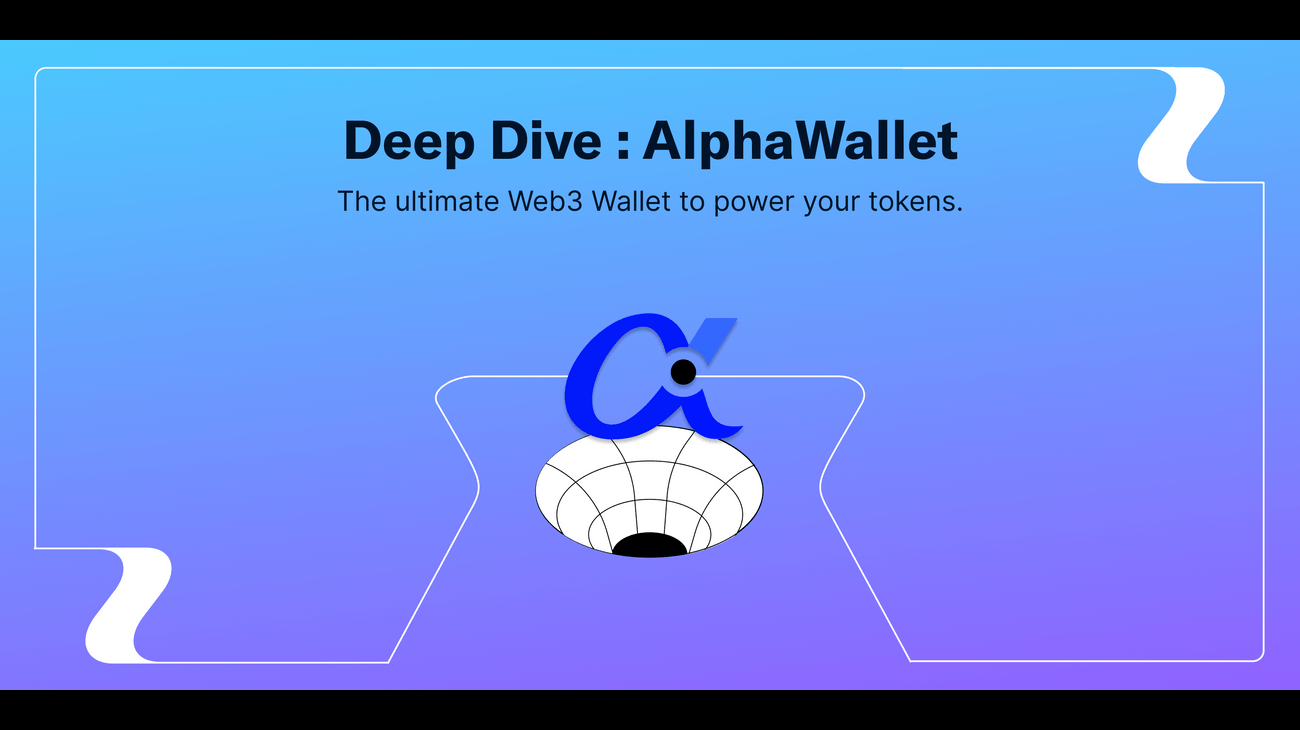 Blockchain is a buzzword and, at this point, sort of a meme. However, at its core, blockchain technology underpins the entire crypto ( web3) industry.

And crypto “wallets” are the windows into a blockchain’s soul.

What is a Crypto Wallet?

Crypto wallets allow users to sign off on transactions that buy, sell, transfer, and/or utilize digital assets. They come in many forms, from hardware devices like Trezor to browser extensions like MetaMask.

Public keys are simple — they act as the address for a wallet. If someone asked you to send them $10 in ETH, you would ask for their ETH address — which is the same thing as their public key (asking for an ETH address is very similar to asking for a Venmo or Zelle handle).

Private keys are the secret sauce of crypto. A private key is like the key to a safety deposit box — anyone who has access to the private key of a wallet can take control of the balance held there. However, instead of storing value in a safety deposit box at a bank, crypto users can store their private keys in a crypto wallet and, thereby, become their own bank. In crypto-speak, this is called “self-custody.” From there, to make a transaction on a blockchain, the holder of an addresses’ private key must sign off via a crypto wallet.

TL;DR → Crypto wallets are how users interact with blockchain assets. 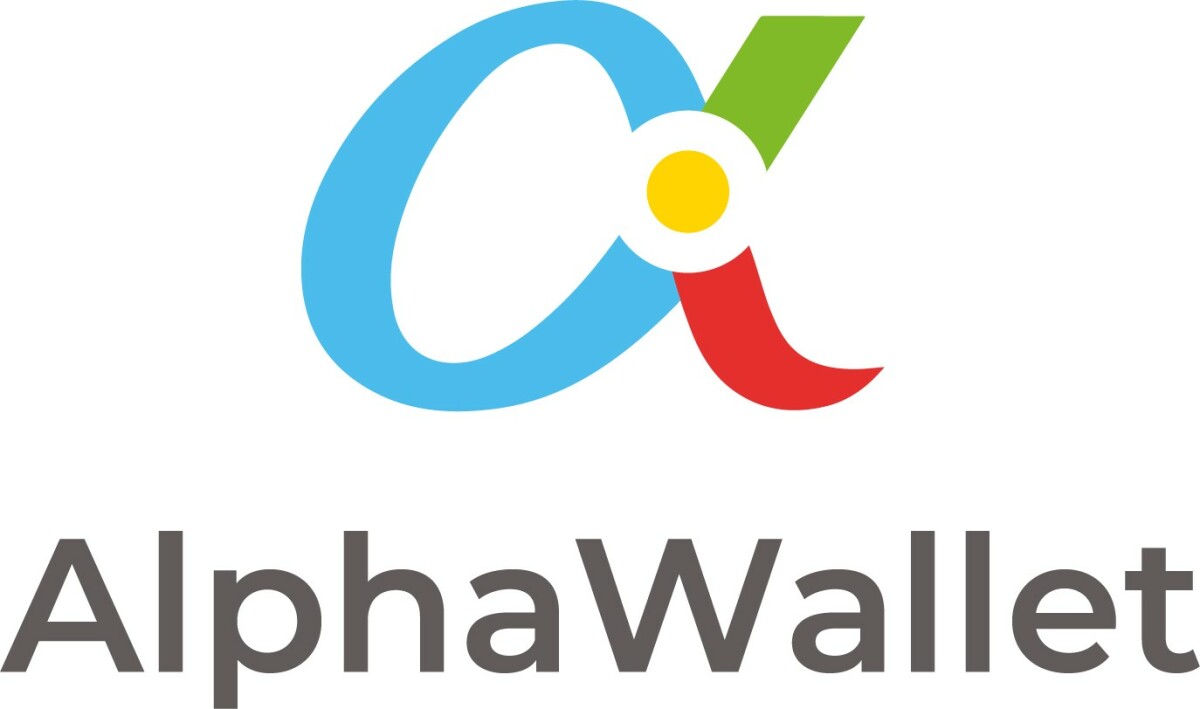 Keeping assets in a self-custody mechanism like AlphaWallet is the first step in participating in DeFi. By using AlphaWallet, users choose to be their own bank in the permissionless blockchain world — meaning they now have access to a 24/7/365 market that offers an almost limitless subset of financial services like borrowing/lending services and trading platforms, crypto bank accounts, and more. This access is granted without relying upon a third-party, like a bank. Instead, users of self-custody wallets like AlphaWallet have a direct line to DeFi, which they can use by signing transactions inside their crypto wallet.

AlphaWallet takes the concept of self-custody and ups the ante. The wallet uses “Secure Enclave” technology to help keep private keys safe. Users of AlphaWallet can elect to implement both biometrics and pin-code authorization to their app to prevent unwanted access to the wallet in case a device is stolen or lost. In addition, AlphaWallet does not implement KYC requests — which allows users from any jurisdiction to safely use the application and not risk being denied access to funds based on the whims of a centralized third-party. And, of course, AlphaWallet creates wallet addresses using the BIP39 standard, meaning that a user’s 12-word seed phrase (aka a user’s private key) can be used to restore a wallet in the case of a device loss. 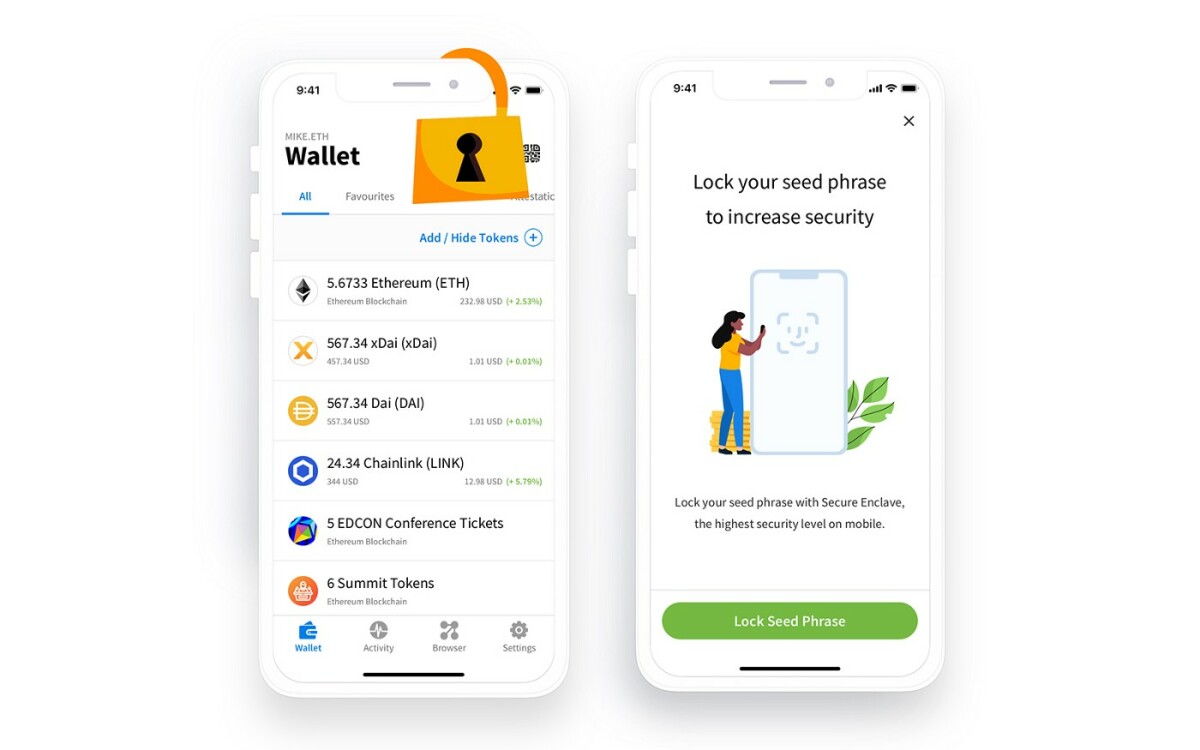 For users who are concerned about on-chain identity, AlphaWallet facilitates a unique “attestation” process wherein users can prove their identity via email or phone number without revealing their wallet or email addresses.

Smart Token Labs pioneered Tokenscript — a new framework for token issuers and blockchain developers that helps end-users use tokens within their crypto wallet. TokenScript will set a new standard for token composability in a Web3 future where tokens are as ubiquitous as web pages, and where tokens will become primary objects of ownership, identity, and interaction. Essentially, TokenScript lets developers define a set of rules to describe the business logic of a token as an XML file, signed with JavaScript. From there, wallets can use a token’s TokenScript to create an efficient, clean user experience for users. 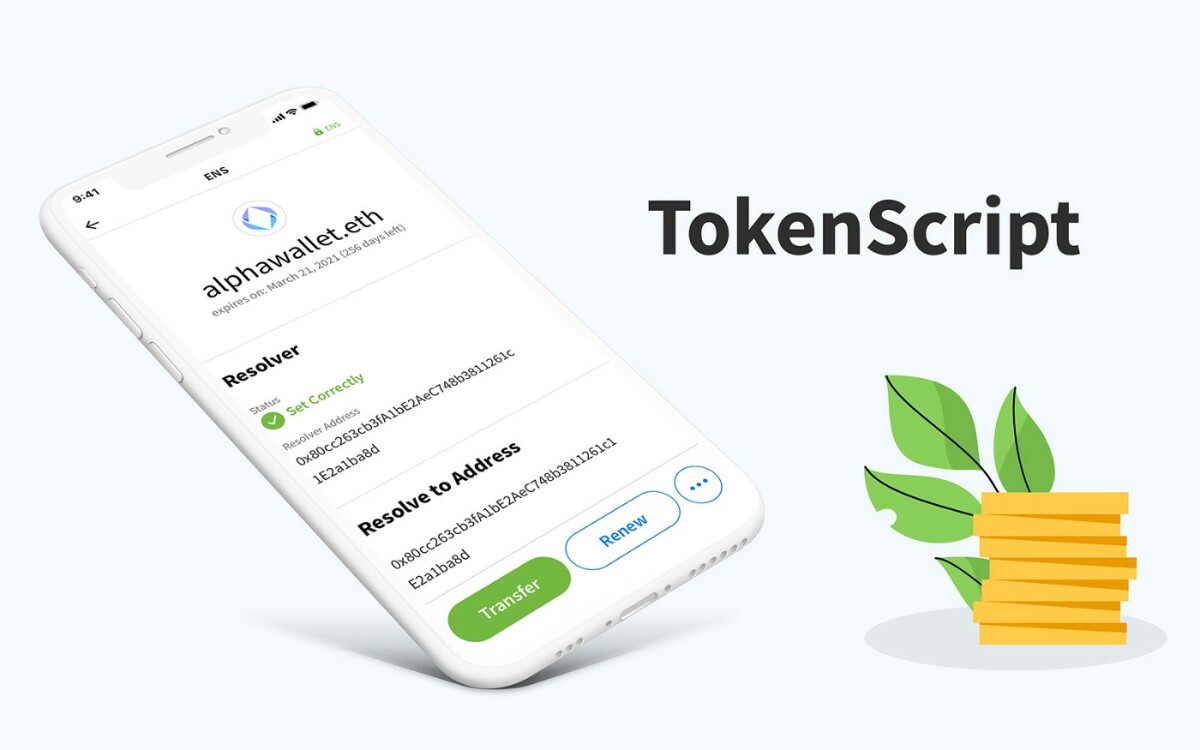 In the words of AlphaWallet founder Victor Zhang, “TokenScript is similar to web frameworks used by web apps, combining the attributes of a blockchain-based token and the perks of a web app, enabling easy to use intuitive UIs such as the AlphaWallet, from where users can interact directly with blockchain-powered applications and services.”

For example, if an NFT in a wallet represents a digital concert ticket, via TokenScript, AlphaWallet…

For example, if a user holds cWBTC, a derivative from the decentralized borrow/lender Compound, AlphaWallet…

AlphaWallet was initially created to support Ethereum but has since branched out to support many other networks, including Gnosis, Ethereum Classic, BNB Chain, Heco, Fantom, Avalanche, Polygon, and Arbitrum etc.

Via AlphaWallet’s Web3 browser, users have an intuitive and securely developed portal to experience the decentralized web. Overall, AlphaWallet allows users to explore networks that combine to protect over $180 billion in assets across roughly 1,500 protocols, data from DeFi Llama shows.

Whether it be earning interest on DAI or USDC, receiving rewards for offering liquidity on a DEX, or staking coins to secure a network, AlphaWallet can act as the central hub for any DeFi activity.

For businesses, AlphaWallet has built out quite a suite of use-cases too: 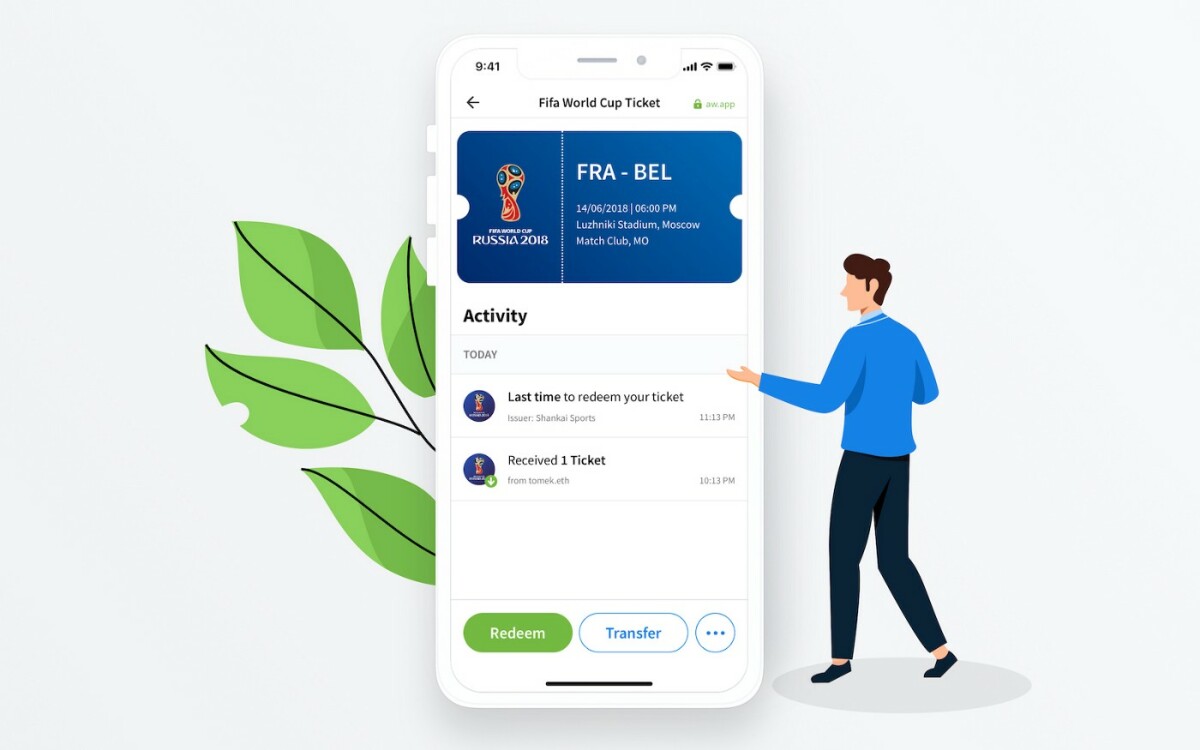 As the world has come to realize in the past 24 months, NFT tickets offer a significant upgrade over physical documents because 1) NFTs don’t need to be printed or distributed and 2) the secondary market for physical tickets are un-regulated and prices fluctuate violently with no additional value going back to the creator of the ticket.

Shankai teamed up with AlphaWallet to distribute crypto tickets as NFTs with a defined TokenScript that allowed users to easily use the NFT (or sell it) to gain entrance to the event via AlphaWallet’s mobile app.

AlphaWallet is partnering with a luxury car maker Karma Automotive to reimagine the way car title is transferred. 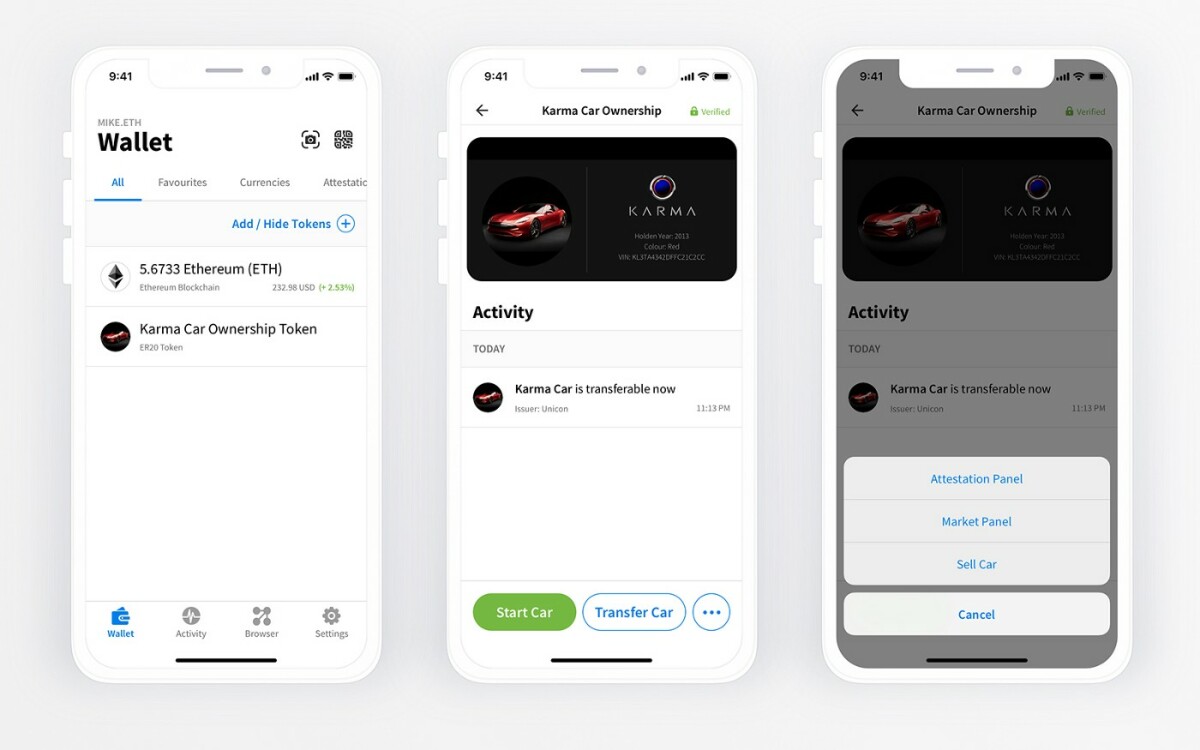 As currently constituted, the automotive industry is fragmented, with no complete, trustworthy report on the state of a car to all relevant stakeholders in a transaction. Furthermore, cars are becoming increasingly internet-savvy — yet ownership is still tied to legacy, paper-based systems.

AlphaWallet is pioneering an NFT system that connects each Karma car to a digital token that holds information like VIN Number, insurance, title, etc. From there, the owner can transfer the token to other users for specific periods (aka renting out the car) or sell the token on OpenSea, all without going through the archaic process of legacy payment rails like banks, auto shops, or title transfer companies.

AlphaWallet is an open-sourced product with an MIT license, meaning companies can easily create clean, customized wallets for their needs (along with implementing KYC processes if necessary).

To create a blockchain marketplace from scratch, a company would have to build a custom wallet/dapp/website, make sure UX/UI is up to standards, and then collect and maintain all data associated with mandatory KYC regulations. In essence, only large enterprises with big checkbooks could create such experiences.

However, AlphaWallet already exists, so smaller companies can join the blockchain world without having to pay for developer talent or experiencing the steep learning curve of doing it themselves. The white-labeled AlphaWallet tech is ready-to-use and easy to rebrand, where new companies can create a wallet suited for their user’s specific requirements and needs while leveraging the full benefits of AlphaWallet’s continuous improvement, with minimal effort or cost.

Why Is LI.FI Excited About Partnering with AlphaWallet?

LI.FI has built an industry-leading selection of cross-chain tools via an API, widget, and SDK that enables dApps to allow users to buy, swap, or deposit any asset from any chain within their platform. LI.FI is ultra-focused on building out the ideal user experience for web3 users. Our product is built to aggregate DEXs and cross-chain bridges into one platform — thereby abstracting away the messy web of cross-chain transactions into a one-click for users.

Partnering with a forward-looking, open-source, and multi-chain application like AlphaWallet is a win-win. AlphaWallet users will now have access to a decentralized, cross-chain solution allowing them to swap assets among 10+ chains. And LI.FI is getting access to a new set of crypto-native users who will increase our cross-chain volume.

LI.FI is built on the premise that the future is multi-chain, and we are striving to become THE solution for cross-chain bridging. To do so, partnering with forward-looking, decentralized, and robust applications is a must… so, obviously, we’re excited to have AlphaWallet on our side.

To learn more about AlphaWallet, check out their website!

Get Started With LI.FI Today:

For more information about LI.FI,

We’ve partnered up with the brightest minds and aim to build the best abstraction and aggregation solution available on the market. If you’re a blockchain network, bridge builder, wallet, or dApp developer, come talk to us and let’s work together!