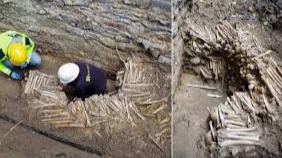 An ancient wall of human bones was discovered

Scientists from Belgium have made an amazing discovery. Near the cathedral in Ghent they came across unique walls. Their uniqueness lies in the fact that they were built of ... human bones and skulls.

Belgian archaeologists have found a unique find. Near the cathedral of St. Walls made of human skeletons were discovered in Ghent in Ghent. The dominant elements of the structure were femur and tibia, the space between the layers of the walls was filled with skulls. Whole skeletons were found above the low walls.

- This is a unique discovery in Belgium. Nothing similar has ever been found here before - specialists from Ruben Willaert bvba in Bruges admit.

Scientists estimate that the skeletons probably date back to the second half of the 15th century, but the walls themselves could have been erected many years later. According to preliminary studies, the period of their construction dates back to the turn of the seventeenth and eighteenth centuries. Archaeologists admit, however, that they have a lot of work ahead of them to fully confirm these assumptions.

Belgian scientists say the skeletons that were used in the construction were excavated from nearby cemeteries to make room for new burials. People did not want to throw them out because of their customs and faith in the resurrection. For this reason, they built ossuaries and other buildings within cemeteries. Findings of this type are known from other places, including the catacombs near Paris.

In connection with the loud discovery, there were a lot of questions about whether a unique wall will become a tourist object. Selfie against the background of human remains seemed too exotic idea for the local researchers who decided to remove the bones. The main attraction for visitors to the cathedral of St. Therefore, the Ghent Altar, also known as the Adoration of the Mystic Lamb by the van Eyck brothers, will remain cotton.

Evrything about lifestyle and many others. News, health, games, workout and much more infos.