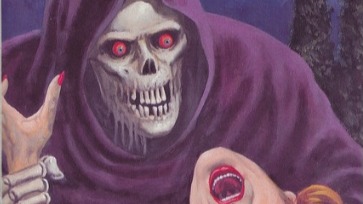 I was Driving a Van, beside me was my Wife -she was Hurt badly and i had to Drive her to a Hospital

I was in a Rush, driving way to fast-so damn fast

There was a Traffic Jam right in front of me, damn I was so fast i couldn't brake

I had to evade, evade the cars

So i steered over to the Sidewalk, there where People on that Sidewalk-damn I had to evade them too

The road continued downward but the Sidewalk ended with a abysm, it went down 4 or maybe 5 meters

I didn't know that the Sidewalk would end, there was no railing and no other Indicator that would have warned me. I was to fast to react, all I could do was going down

We where not buckled up, so i was thrown out of the front Window

Thrown out with her, had to react fast-I had to Protect her

I was crushed and the car was still moving behind us, it came flying at us with full Speed

Everything was Happening so damn fast, my Body was broken but i had to save her

I gave it my all and pushed her to the Side, pushed her away from the incoming Van

And than i was crushed

I woke up in an Hospital, I was lying in a Bed and my Wife was standing right in front of it

She was unharmed and seemed fine, than i took a look at my Body and noticed something Strange

My Body was also unharmed and I had no injuries at all-this was just Impossible, what was going on here? Was I Dead?, Was I in Hell?

This Thing was not my Wife

I had Goosebumps while i watched everything turn and i felt a trembling in my Body, the sensation of Fear that totally took over me

I was so shocked, all i could to was watch-watching her

She began to talk slowly:

"You're a sharp one, you saw thru it all way faster than excepted. I will make u suffer, I will make you feel pain. All that awaits u is endless suffering and pain!, and nothing else"

I was still lying there, lying in the Dark and when she stopped talking i went down. I was falling, falling in this Void of Darkness