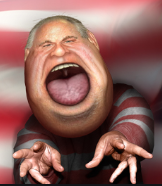 Sometimes you feel distaste or anger towards someone and just don't know exactly why you have that strong feeling against the person.

My guess is that we have our personal radar that can detect vibes that are against our own.

This story is about the person who lives near our house.He is my mother's first degree cousin Pedrito. I don't usually call him uncle, just because I don't talk to him. Maybe because everything I and friends play nearby his house,he would then call us out to go away and play away from the house.

Pedrito is big sized man, and they're friends with Uncle Daniel. Remember the one I talked you about in my log #18A. If you haven't had the chance to read it, click here https://beta.cent.co/+crhbff. He is the second member of their group called, "Partido Tiyan" simply translated as "Stomach Party". The name derived from always ready and on a look out for food gathering like fiesta, birthday, weddings, or the likes that invite people to come celebrate, eat and drink.

This story is about how loving someone so much could ruin his upbringing. As it affected mine. Pedrito is a spoiled son of my second degree grandmother. But it's not always good to spoil your love one's.My mother told me, that Pedrito was kind of hot headed person. Once incident he, cut off his sandals in pieces just because did grandmother was not able to buy him what he wanted. That was just of the many similar events. Pedrito has this sharp look in his eyes. You really can't seem to see compassion in there.There are days when he and the other "partido tiyan" would go on binge drinking for hours. You hear loud laughter and drunk stories of this and that even from afar.Most of those times when he is drunk, I can hear the sound of kitchen utensils being thrown away along with loud rants and shouts.What's painful is that you can really hear the sound of my second degree grandmother crying in their house. Pleading to stop throwing those kitchen stuffs. As a kid, I feel useless and unable to help. Most of the adults are away working and some have no balls to really intervene.I remember one time when Granny suffered dementia and had to use a walker to stand up and go to bathroom. She would call out to the neighbors for help because Pedrito won't even flinch. Pedrito just sit around with his cigarette puffing smoke in the air. Or somewhere away drinking with his drinking buddies. Pedrito has been separated with his wife and daughter. His wife ran away with the kids, as she was battered. In my early years as a kid in the province, I never heard of child abuse or magna carta for women back then. So I guess the beating was seen as normal.

There are many factors and reason why Pedrito happen to behave as he does. One I can think of is the lack of father figure.Granny was single mother and happen to have 3 kids from different fathers, who are nowhere present to help raise the kids.I cannot say if granny was a loving mother to the kids but base on what I've heard she was somewhere between. Her favorite kid was Pedrito. Always getting more compared to the other siblings. So what happen along the way I really don't know.But somewhere, a spark that had burned it all must have started. A life changing belief or whatever it could be.

One of the reasons for writing this story as part of my life changing blog is to share an observation.A story that is peculiar to some and is a new normal for others who have lived an life similar to this story.What could have been the reason of Pedrito's behavior? Would you condemn someone with his personality or is there redemption somewhere along the way. Pedrito passed away years ago. But I can still remember the sound of his voice shouting to us as kids, "Don't play in there!!!"